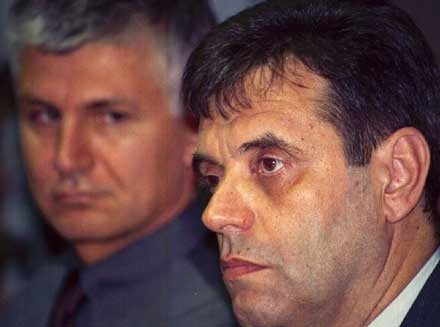 The political crisis in Serbia has been heating up for months now. The ruling DOS coalition (Democratic Opposition of Serbia) made up of 18 different parties formerly united in their wish to topple Milosevic, is facing serious difficulties in retaining power in the country. The central figures in the clash have been, all this time, the two biggest and most influential DOS political parties - Democratic Party (DS) and Democratic Party of Serbia (DSS) and their respective leaders, the Serbian Prime Minister Zoran Djindjic and the Yugoslav President Vojislav Kostunica.
At the beginning of the nineties, both men were under the same umbrella. Back then the only relatively large political party to abstain from the nationalist hysteria of both Milosevic's allies and his bitter opponents was the Democratic Party, with three key figures. The first one was the president of the party - Dragoljub Micunovic - Ph.D. in Philosophy and known intellectual expelled from the University in early 70's for his support to the "liberalisation of academic humanistic studies after the events of 1968' (the key executor in this project is said to have been Milan Milutinovic, the acting Serbian puppet president). The other two were Vojislav Kostunica, a slow-paced but decisive constitutional lawyer of moderately national rhetoric, and Zoran Djindjic, son of a top retired Yugoslav Army general, a former long-haired, ear-pierced peace mongering liberal, then with a fresh Ph.D. in Social Philosophy defended in Germany under Habermas. Once the nationalist zeal faded down, the Democratic Party started shattering like most Serbian opposition parties, not long after it was given "best chances to win the elections".

Already in 1992, Vojislav Kostunica, dissatisfied with the nationally-neutral position of the democrats, formed the Democratic Party of Serbia. Three years later, the young and vigorous Zoran Djindjic carried out what was later described as an inter-party coup, and replaced Micunovic as the head of the Democrats. Micunovic soon formed a small Democratic Centre party which failed to attract voters to any larger degree. This constellation found the protagonists in October 2000 when Milosevic was finally overthrown. With no serious competition in any of the minor parties from DOS, and without the by-then strong Serbian Renewal Movement (SPO) of Vuk Draskovic, which had wrongly decided to leave DOS in summer 2000 and take the elections on its own, the three men had a free way to the most important political positions. Micunovic, now aging one-time authority, became the relatively moderate Speaker of the Federal Parliament Upper House, Kostunica was elected Yugoslav Federal President replacing Milosevic, and Djindjic would soon become the Serbian Prime Minister (February 2001).
Hints of a future clash between the last two could be seen almost immediately October 6th 2000, and it became more serious as time passed. The immediate problem was that, by October 2000, the Democratic Party of Zoran Djindjic was the most influential in DOS. In fact, it had provided infrastructure, party organization, observation and control of the election and most of the electoral campaign. The remaining 17 parties had neither enough membership nor organization to contribute to this task. On the other hand, as Zoran Djindjic's image in the media was catastrophic, someone else had to be chosen as a candidate in opposition to Milosevic. Dragoslav Avramovic, the former Central Bank Governor who stopped inflation in 1994, refused and DOS chose Kostunica. Dr. Kostunica soon yielded to the pressure, although he was initially reluctant. This silent office-based legalist now had to become a new leader who would mark the beginning of the new era. First shyly, then more and more enthusiastically, he accepted the new role and eventually beat Milosevic outright. So great was his popularity, that in late October 2000 it reached 70% of the polls, more than Milosevic had ever had. It was at this time that his DSS, a relatively small right-centrist party that was long neglected in political trade market, began to expand rapidly. It attracted thousands of new members, some already politically inactive, but also many former SPS and even JUL (the notorious Yugoslav Left of Milosevic's wife Mira Markovic) members and supporters, who just wanted to turn coats and keep financial privileges. The rest of DOS expanded, too, but while DS was pretty careful not to admit any influential former regime supporters, DSS was signing new members in large scale. DSS reached its peak very quickly, almost the size of DS, and started proclaiming itself "the biggest and most influential political option" which demanded "its substantial share".
Everyone already knew that the conflict would be long and probably end up in the dissolution of the coalition. It is difficult to say whether this conflict is personal or conceptual. As Djindjic and Kostunica categorically denied any personal involvement in their politics, we shall stick to the most evident conceptual differences. DSSers proclaimed themselves "legalists" and DSers became "pragmatists". In theory, this meant the former would stick to the constitution, initiating slow but durable reforms and avoid any "dangerous abrupt discontinuity" with the former regime. The latter would, however, start "shock therapy" of total discontinuity and quick reintegration in the international community. In practice, this meant DSS practically blocked all fast reforms, and was very cautious to abstain from any unpopular decisions and leave DS, with the already unpopular Djindjic, to do the dirty work. Such was the case with keeping the former state security chief Markovic for months after October 2000, or (still!) keeping Milosevic's Chief of General Staff mafia clans or other underground powers. The language used by Djindjic and by his economic team (Djelic, Dinkic, Labus, Vlahovic, Pitic) to describe a modern Serbia gained him some more popularity, but remained fairly foreign to most of the population, which still generally supported Kostunica, who is considered more easy-going, moderately nationalistic and wary-of-the international-community.

Therefore, there is a "slow, boring, impractical legalism ruling and yet acting opposition on the one hand, and on the other a clumsy, headless, superficial, criminalized pragmatism carrying out reforms under dictation of internal or foreign interest groups" (Branko Dragas, Belgrade Open School, quoted from Milan Milosevic, "Vreme", 20 June 2002). DSS has indeed been a virtual opposition all this time, careful not to participate in any unpopular decisions of the Djindjic cabinet and thus jeopardize its good rating towards oncoming elections. But it never so far voted against the Government. It has enough MPs to topple Djindjic with SPS and Seselj's Radicals but this is seen as too much of a gamble, given the unpopularity of the opposition in Serbia at the moment. Its regular abstention from DOS Presidency meetings was also conspicuous.
At one point, Djindjic seemed to have had enough. He had lost the DSS's support, some minor parties had become reluctant to support him too, and his parliament majority shook. Therefore, on the 7th June, DOS Presidency expelled a number of MPs from the Parliament on grounds of "insufficient attendance". Indeed, the lack of quorum had become a chronic disease in the Serbian assembly, but since DSS often started boycotting Parliament sessions in disagreement with Djindjic's policy making, this expulsion, though apparently not conditioned by the party, actually threw out 21 DSS MPs (out of 50 total DOS MPs replaced). DSS said this was a "coup" since parties, not coalitions, managed their MP mandates, a dispute which remained unresolved by constitutional lawyers. This gave Djindjic sufficient majority to prolong his government's term in office for another few months and avoid direct elections. In fact, polls show that DSS might have got the upper hand. In return, DSS left the coalition and the Parliament, saying it would be back only if the Supreme Court would have judged in its favour (not expected, but still pending).
This obviously leads to new elections, although there is a disagreement about the timing. Djindjic insists on the regular 2004 term, but this is not likely. DSS wants them now, but most analysts agree that the first half of 2003 is a more realistic date. Serbia's Presidential elections are due in September, with the probable double candidature between DS's Federal Vicepremier and economic expert Miroljub Labus and the candidature of a DSS representative, probably Kostunica himself, although nothing is yet official. DSS demands a new Serbian Constitution before these elections, but it is unlikely to be done within two months. Meanwhile, negotiations with Montenegro have only just started, and this is perhaps the only issue on which DS and DSS have identical stands. Then again, the possible prolongation of the Constitutional Treaty negotiations might slow down the electoral fever in Serbia for a while.
Finally, it seems that the clash has reached the point of no return. Elections are coming up, stay tuned for the big Djindjic / Kostunica duel. Analysts say the outcome might easily turn out 50 - 50 again. And what will happens after this? We must wait and see.