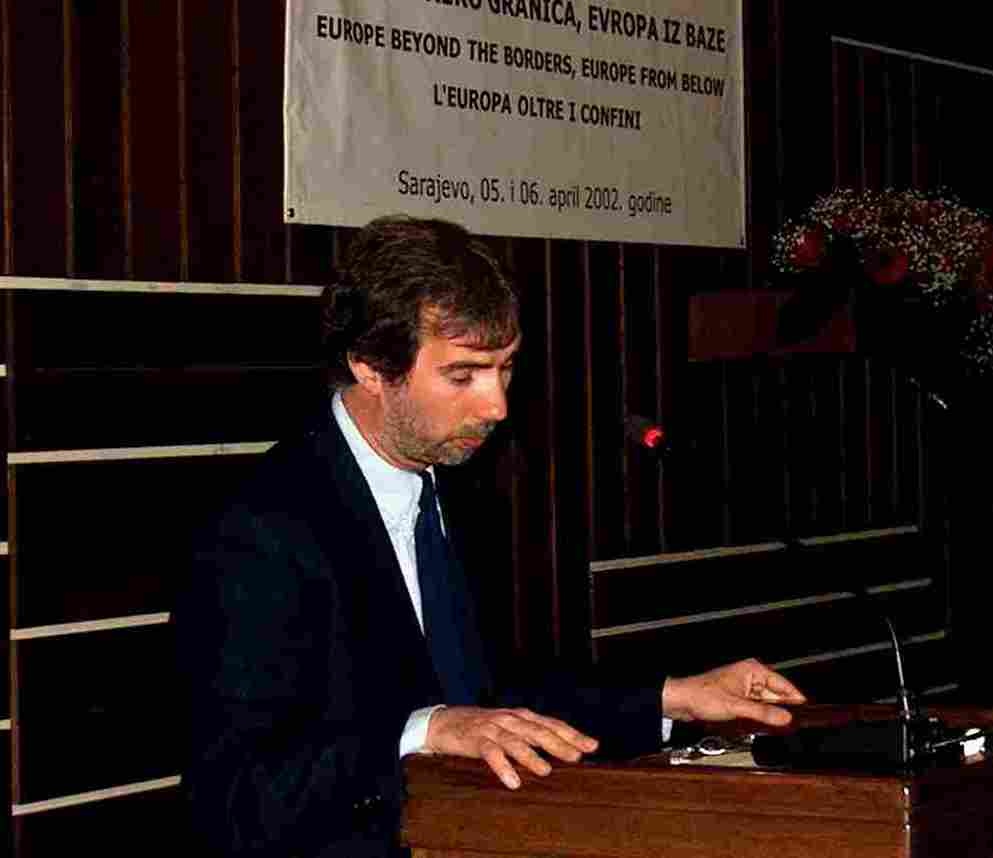 Published below is Marcon's speech, President of ICS, Solidarity Italian Association, which took place during Mr Prodi's meeting in order to present the appeal on the integration of the Balkans in Europe

Since yesterday morning more than 350 representatives of NGOs, associations, local groups and organizations have been discussing and sharing their opinion on our idea to build what we called a "Europe from Below". The Municipality of Sarajevo - which we thank once again -, the Observatory on the Balkans and ICS - Italian Consortium on Solidarity - have worked together in this initiative. They represent organisations that often visited the Balkans in the 90s. Thousands of volunteers and pacifists contributed with actions of solidarity and peace, humanitarian aid and co-operation. We discussed on how to improve our collaboration, how to encourage mutual initiatives towards European Institutions, how to sustain the improvement of human resources, of democracy, and the promotion of a citizenship in the Europe we want to build together.

The Europe we have been talking about in the last two days is based on democracy and people's participation, on the role held by organized civil society, by local authorities and communities and by single regions. An Europe based on the values of human rights, solidarity, social inclusion, integration and co-operation, peace and opposition against war, however and with whatever adjective we wish to define it.

We are discussing about this, exactly ten years after the war started. A war which did not only distraught the Balkans, but Europe as a whole. During the dramatic period of the 90s, the war showed weaknesses and contradictions, as well as the limits of an intervention which was unable to prevent war and to build a peace based on human rights, peoples' dignity and democracy.

When we mentioned the need to build an "Europe from below" we didn't wish to demagogically remark the institutional and political contrasts existing in the Union and in the Commission. We simply wished to underline a fact: an Europe with certain bases and perspectives will be impossible without a significant level of democratic participation, without a social dimension and without a real and widespread citizenship. Europe without democracy will never see the light. No use of demagogy, but not even of the common rhetoric of a civil society which is fondled on the one hand, but always considered an extra and rarely given a true responsibility on the other.

Your presence today in Sarajevo, Mr Prodi, and the fact that you are listening to our reflections and reasons encourage our trust and hope for the Europe we wish for. An Europe where there is dialogue between institutions and civil society. This is what we expect from the proceedings of the Convention, which have recently inaugurated in view of a Constitution, which, we hope, will widen the spaces of democracy, of participation and citizenship. This is true also in view of a further widening of the European Union towards the countries of South and Central-Eastern Europe. We would like to have something more than good omens, we would like to fix a definite date: the term could be 2007 - the fiftieth anniversary of the Treaties of Rome - the year when the Balkans could enter the European Union, when the two Europes will be reassembled. We have always said it: the Balkans are not separated from Europe, they are Europe.

Integration must not be seen as a price to be paid, but rather as an opportunity that can be taken. An opportunity for development, peace and co-operation. As Mister Hamamdzic, Mayor of Sarajevo, already reminded us, without this prospect "the countries now in transition risk to be literally cut out of the West", and "new walls" between a "first class" and a "second class" Europe "could be built".

This is true as far as the Balkans are concerned, but it also counts for the Mediterranean area. Even more after the tragedy the Middle East is experiencing right now. Let Europe raise its voice - with an independent initiative - in order to stop the massacre against the civil population and to let human rights and UN resolutions be respected. These resolutions had however disregarded had fixed clear requirements: the ceasing of the Palestinian territories' occupation, the fight against terrorism that affects helpless people, the creation of a Palestinian State next to the Israeli one.

In these two days of meeting, we have realized we need a good amount of political courage in front of the new challenges Europe has to face. This requires a common effort for an Europe of social cohesion, not of wild neo-liberalism; for an Europe of integration, not of economic and social exclusion; for an Europe that's peaceful rather than nationalist or of the geo-politics of the men in power; for an Europe of cohabitation with no barriers against immigrants and asylum seekers. We cannot be moved and claim "humanitarian interference" for the floods of refugees coming from ethnic cleaning and wars and then send this people back - Curds as well as Afghans, Roms and other minorities - to the prosecutions and conflicts they are trying to escape from. Migratory movements are not a plague and they have to be governed, not hindered.

A common European policy for immigration cannot only take into account the problem of the borders and that of public order, quite the contrary, it should take into account constructive policies: integration, rights, citizenship. And this requires less hypocrisy and more consistency.

The principles of co-existence and multi-ethnicity have to be defended not only in Sarajevo and Pristina, but also in Frankfurt and in Paris, in Rome and Copenhagen, in Brussels as in Strasburg.

The 6th of April is for Sarajevo not only a sad anniversary - the beginning of the war in Bosnia and Herzegovina - on the contrary it also reminds of a happy day: the liberation from the Nazi-fascist oppression and the victory over the disvalues it tried to instil: violence, authoritarianism, anti-Semitism and racism, barbarity.

This is the message we wish to convey to you Mr Prodi, a message inspired by that day of happiness, freedom and justice, with which we wish to underline again our commitment in building a common future of solidarity and peace, together with peoples' democratic participation.