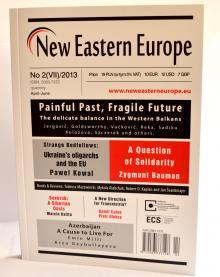 New Eastern Europe is a quarterly news journal which focuses on Central/Eastern European affairs. The project is a joint collaboration between the City of Gdansk, the European Solidarity Centre and the Jan Nowak-Jezioranski College of Eastern Europe

The spring 2013 issue of New Eastern Europe provides special coverage of a complex region marred by a painful past but facing a hopeful, yet fragile future – the western Balkans.
Vesna Goldsworthy, a Serbian writer and poet, opens this feature with an original poem written especially for this issue. The feature includes acclaimed writer and journalist, Miljenko Jergović, who analyses Croatia’s entry into the European Union by comparing the countries of the region to a bazaar.
Polish journalist Ziemowit Szczerek draws attention to the remaining conflict-prone areas and shows that borders still matter – even on a continent that is so proud of having broken them. Skopje-based Artan Sadiku and Katerina Kolozova show their city as divided to the point of being schizophrenic. While Blerim Reka, former Macedonian Ambassador to the EU, argues for a new approach in the region by opening up the borders and creating a Balkan Benelux. Other articles in the issue explore the promises and challenges of Serbia’s new government, the slow process of reconciliation in Bosnia and Herzegovina, and Yugo-nostalgia, a phenomenon of longing for the old system.
In addition to the feature on the Balkans, the issue also includes an essay by philosopher and sociologist, Zygmunt Bauman – who asks whether the idea of Solidarity, so important in the 20th century, is relevant today?
Ukrainian People’s Deputy, Volodymyr Ariev, shows us how the elections in the fall of 2012 do not reflect the will of the Ukrainian people. While Paweł Kowal, a member of the European Parliament, argues that it is high time to consider a way to work with Ukraine’s oligarchs instead of disregarding them as part of the problem.
Lastly this issue gives an insightful look at Azerbaijan with an interview with opposition writers Arzu Geybullayeva and Emin Milli as well as a discussion on Azeri-Iranian relations and a report from Gadabay – a city built on gold.
The issue closes with reviews of books from the region, along with a special review of a recent exhibit of Czech surrealist Jan Švankmajer.