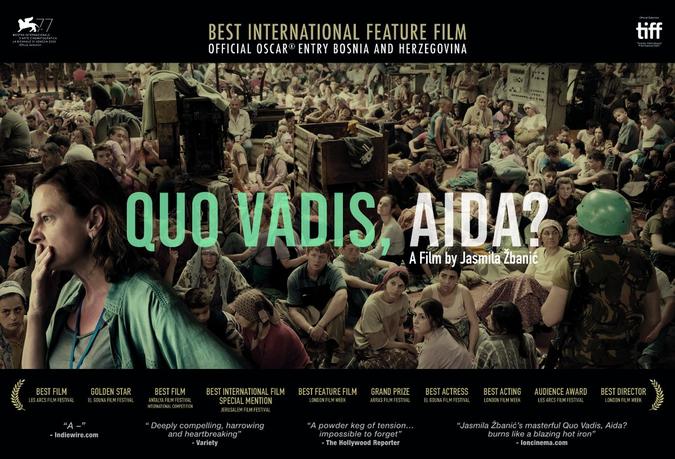 The Harriman Institute is pleased to partner with the Bosnian-Herzegovinan Film Festival, the Post Conflict Research Center, and the Srebrenica Memorial Center to present a virtual screening of the 2020 film Quo Vadis, Aida? (Where Are You Going, Aida?) and a discussion with screenwriter and director Jasmila Žbanić in conversation with:

Quo Vadis, Aida? is a new film directed and produced by Jasmila Žbanić, the award-winning filmmaker from Bosnia and Herzegovina who earned the Golden Bear in 2006 for her debut feature Grbavica: The Land of My Dreams. Žbanić’s latest film is a dramatic depiction of the well documented Srebrenica genocide that occurred in Eastern Bosnia on July 11, 1995, when more than 8,000 Muslim men and boys were murdered by the forces led by Bosnian Serb Army commander General Ratko Mladić.

Aida is a translator for the United Nations in the small town of Srebrenica. When the Serbian army takes over the town, her family is among the thousands of citizens looking for shelter in the UN camp. As an insider to the negotiations, Aida has access to crucial information that she needs to interpret. What is at the horizon for her family and people—rescue or death? Which move should she take?

With this powerful film, Jasmila Žbanić continues in creating work that bears witness to the unspeakable war trauma of others. As in her documentaries and films such as Grbavica and For Those Who Can Tell No Tales, in this latest work Žbanić draws the viewer in with poignant storytelling and simultaneously conveys the intimacy and the magnitude of the tragedy that unfolds. Quo Vadis, Aida? is Bosnia’s submission to the Academy for Motion Picture and Arts and Sciences in the Foreign Film category. It has been screened at the Venice Film Festival and premiered at the Toronto International Film Festival.

In the twenty-five years since the Srebrenica genocide, many continue to deny its occurrence and immerse themselves in fake news and alternative facts about the event. How can cinema act as a counter-point to such denials of factual reality, in Bosnia and beyond? This theme is now more pertinent than ever on a global scale, including in the United States.