Serbia, the state against independent media 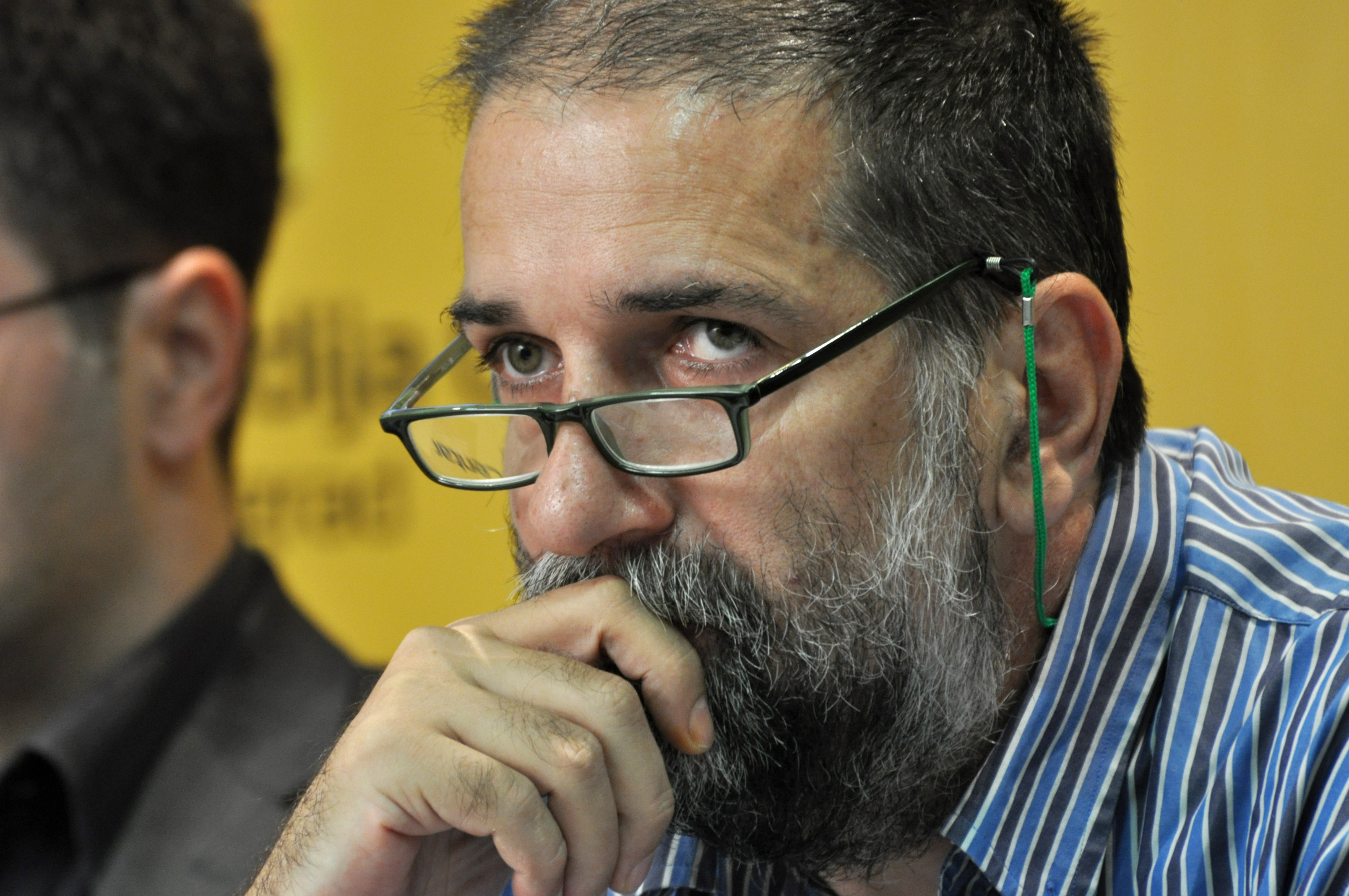 First the closure of the weekly Novine Vranjske and the hunger strike of its director, then the Defense minister's attack against the investigative portal Krik. Hard times for independent media in Serbia

"Mine is a desperate move to end my journalistic career and at the same time preserve at least a modicum of self-respect and dignity", wrote Vukašin Obradović announcing his hunger strike on September 19th.

Obradović, director and editor of the weekly newspaper Novine Vranjske , is one of Serbia's most respected journalists. The day before the dramatic decision, he had stated that "tax inspectors have been in our offices for weeks and our publisher is forced to declare bankruptcy", although – as Obradović says – all past debts have been solved. The story of Vranjske is just one of the latest examples of the pressures faced by Serbia's few independent media.

Immediately after Obradović declared the hunger strike, all journalist associations, non-governmental organisations, opposition parties, and public figures reacted – about 200 people met that very night in front of the Serbian Parliament in order to show their support to Vranjske.

The protest ended with the news that Obradović had been taken to the hospital. The next day, he interrupted the hunger strike. This dramatic event has led to numerous reactions, including the joint press release by the International Federation of Journalists (IFJ) and the European Federation of Journalists (EFJ) that, in solidarity with Vranjske, condemned the political and economic pressures against the media and asked for "international organisations to stop ignoring the serious problems journalists and media face in Serbia" and to act "to protect the democratic values they promote".

Novine Vranjske has been published for 23 years in Vranje, a town of 86,000 inhabitants in southern Serbia. Already in the Nineties it had become more than a local weekly, gaining the reputation of a highly critical outlet towards Slobodan Milosevic's regime.

This small team of brave journalists has always published texts exposing the maladies of local businessmen and politicians as well as organised crime. Vranjske was the first to report about paedophilia within the Serbian Orthodox Church, following the complaints of four boys against the bishop of Vranje Pahomije.

Politics and Media System in Serbia

Vukašin Obradović and the journalists from Vranjske received the most prestigious awards in Serbia. In 2009, the OSCE Mission to Serbia awarded Obradović the "Character of the Year" award for his support to the democratic principles of independent information, impartiality, and the promotion of dialogue between ethnic groups in southern Serbia. From 2010 until February this year, Obradović was president of the Independent Association of Serbian Journalists (NUNS).

Over the last few years, all these awards, the unceasing struggle to introduce a proper media market in transitioning Serbia, and the efforts to ensure that journalists are protected from political pressure have led Obradović to become the target of accusations by politicians, slurs and threats from pro-government tabloids , and even threats to his family – something that he has only recently disclosed in interviews, after the announcement of the closure of Vranjske.

The day Obradović decided to start the hunger strike, Prime Minister Ana Brnabić was visiting Vranje. When asked about the closure of Vranjske, she replied that the state cannot subsidise local media. The following day, she tweeted that "in 2017, the government allocated Vranjske an amount higher than all that was given from 2008 to 2012".

What the prime minister omitted – as did the government in the official statement about the affair – is that this budget is allocated on the basis of project funding for local media, approved by commissions normally made of supporters of Aleksandar Vučić's Serbian Progressive Party (SNS), a procedure that was recently introduced with the Media Strategy.

In the last three years, according to Obradović, Vranjske received around 36,500 Euros in project funding, while three other media got much more. A Vranje TV station, owned by an SNS official, received 52,000 Euros this year alone. Within the same call for projects, Vranjske rejected the funding, as the amount granted was only 1,000 Euros.

Furthermore, as revealed by the editorial staff, public companies and companies where the state holds majority stakes were banned from buying ads on Vranjske – advertising contracts have been signed exclusively with the pro-government media. Eventually, a couple of months ago, the owner of Vranjske's premises (a state institution) threatened the paper with eviction.

There are numerous examples of pro-government media receiving state money outside official competitions or through secret agreements with inadequate controls. Former state-owned press agency Tanjug – which officially does not exist any longer after the failed privatisation of 2015, but continues to work – received funding for production needs from the Ministry of Local Administration and Self-Government when it was led by current Prime Minister Ana Brnabić. The two existing independent agencies, Beta and Fonet, did not have the same opportunity.

According to the investigative portal CINS , the Pink TV station – owned by Vučić's supporter Željko Mitrović – received over 7 million Euros in credit from the Agency for Export Insurance and Financing from 2014 to 2016, despite the fact that, according to evidence of the Tax Agency, Mitrović was at the time one of Serbia's major tax evaders.

Unlike Mitrović, Obradović has proofs of payment for all the past taxes, which is why there is no money in the bank account. "Do we want to keep living this way, humiliated and insulted every day? Do we want to continue working in these conditions? These are the answers I expect from journalists and the public", Obradović said in an interview with Radio Slobodna Evropa upon leaving the hospital.

The aunt from Canada

Humiliations and threats against independent journalists in Serbia are now routine. Defense Minister Aleksandar Vulin's attack against the investigative portal Krik and its editor-in-chief Stevan Dojčinović began on September 18th, when Krik published a text revealing that Vulin cannot prove from where he got over 200,000 Euros to pay for his apartment.

Krik received the information from the Anti-Corruption Agency, which had already informed the Prosecution for Organised Crime two years ago. The prosecutor had dropped the case claiming that there was no evidence that Vulin had purchased the apartment illegally.

The explanation that the minister gave to the agency is the following: the money for the apartment came from an aunt of his wife, living in Canada. He also told reporters that the sum was taken to Serbia in cash, 9,000 Euros at a time – an amount that does not need to be reported to customs.

Minister Vulin did not reply to all the other sensible questions he received after this mind-blowing answer.

What keeps coming instead – day after day, hour after hour – are the statements from Vulin's party, the Socialist Movement. "It is no secret that Dojčinović is paid from abroad for every piece where he attacks Vulin, as it is no secret that he uses drugs", reads one of them. "Every enemy of Serbia is his friend, and he hates every person who loves and fights for Serbia".

Ana Brnabić expressed her support for Vulin by saying that these statements were "an emotional reaction" and that the case of the purchase of the apartment would be dealt with by the state institutions.

As a reaction to the closure of Vranjske, the attacks against Krik, and those against independent journalists by the Informer tabloid, about thirty independent media, journalist associations, and civil society organisations created a group to "organise joint actions to support Vranjske and media freedom".

The first action is scheduled for September 28th, when all media are invited to obscure the screens at noon or mark the print edition with the black claim #StojimUzVranjske (#IStandWithVranjske), "symbolising the darkness media in Serbia have faced for years". Who knows, maybe even state institutions – those that, according to Prime Minister Brnabić, should deal with the case – will notice.

Politics and Media System in Serbia