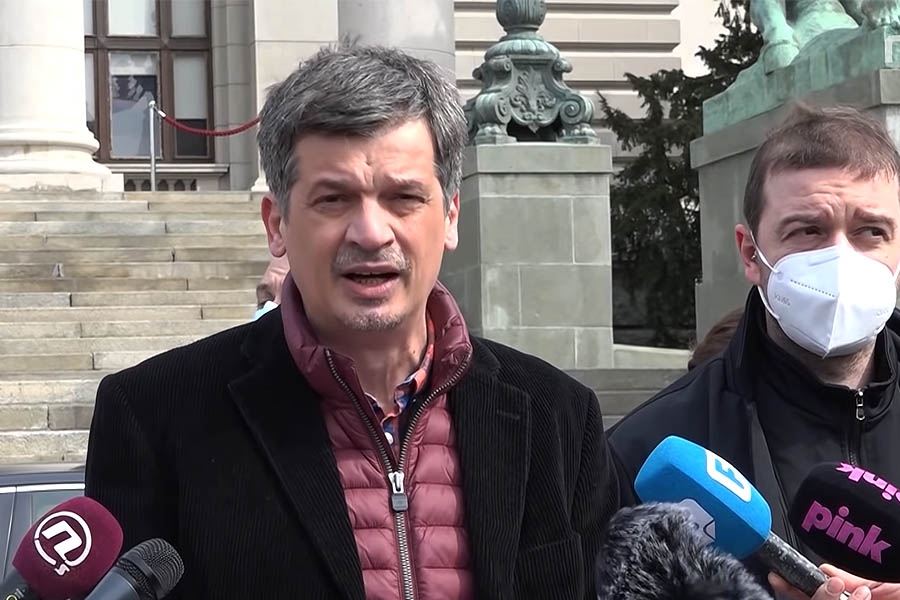 President of NUNS Zeljko Bodrozic and editor-in-chief of KRIK Stevan Dojcinovic at a press conference, March 17, 2021

The media situation in Serbia continues to deteriorate, as illustrated by the recent withdrawal of five journalists’ and media associations from the Working group on safety and protection of journalists, set up by the government last December. Repeated attacks against KRIK journalists were the straw that broke the camel’s back

The reason that drove them to make such a decision lies in the deafening silence of other members of the Working group in the face of attacks against the investigative portal KRIK which deals with corruption and organised crime.

The Ministry of Culture and Information invited the associations that withdrew from the Working group to reconsider their decision “so as to continue working together to improve the safety and protection of journalists in order to create a better media environment. However, to date the Ministry’s plea was to no avail.

Pro-government media – mostly tabloids, but also some national television stations – explicitly accused KRIK of collaborating with a criminal organisation led by Veljko Belivuk, better known as Velja Nevolja, who is also the leader of the ultras group “Principi”.

Recently, Belivuk and a dozen members of his gang have been arrested as part of a large-scale police operation on suspicion of involvement in several murders and in drug trafficking and of planning the assassination of Serbian President Aleksandar Vucic.

The criminalisation of KRIK – one of the most renowned investigative portals and winner of numerous awards in Serbia and abroad – started after the publication of a conversation between Belivuk and the parents of a missing boy, Strahinja Markovic, supposedly killed. As reported by Pink TV, close to the Serbian Progressive Party (SNS), Belivuk told the boy’s father Nenad Markovic to contact KRIK.

Soon afterwards, President Vucic called on Serbian public opinion “not to attack neither KRIK nor anyone else”, but his request appeared hypocritical and cynical, all the more so because some SNS officials, during their public appearances, continued accusing KRIK of being tied to the criminal group led by Belivuk and pro-government media continued publishing articles with titles such as “KRIK became spokesperson for Belivuk”, “A secret deal between KRIK and Belivuk”.

KRIK and Serbian journalists’ associations are concerned by the fact that such titles not only aim at professionally discrediting KRIK journalists, but also put their safety at risk.

In Serbia, for some time now, there has been a feud going on between two criminal groups, the Skaljari clan and the Kavac clan. Dozens of people have been killed in this gang war. The attempt to tie KRIK journalists to one of the clans involved in a feud makes them a potential target for the other clan.

Stevan Dojcinovic, editor-in-chief of KRIK, said that KRIK had never before faced such brutal attacks, adding that KRIK has been writing about Belivuk’s gang and its ties with the Serbian leadership since 2016 and “now all of a sudden they are trying to show that we collaborate with criminals”.

“It seems quite incredible to me and I obviously don’t feel safe, and the same goes for the entire KRIK editorial staff”, stated Dojcinovic.

Ivana Stevanovic, director of the Slavko Curuvija Foundation, said that they withdrew from the Working group on safety of journalists because of “the wall of silence” on attacks against KRIK journalists. According to Stevanovic, the Serbian government embraced the tabloid narrative and keeps targeting KRIK journalists. Stevanovic warns that we are witnessing one of the most serious attacks on Serbian journalists in the last ten years.

Tamara Filipovic, secretary general of NUNS, said that her association decided to withdraw from the Working group because there has not been any palpable progress related to the safety of journalists.

“We haven’t noticed any improvement. In fact, verbal attacks and insults against journalists, mostly coming from politicians, continued after we joined the group, which also includes several representatives of the state”, explained Filipovic.

Regardless of how the whole story ends, the decision of journalists’ associations to withdraw from the working group brought up once again the question of the safety of journalists, this time from a new perspective. If before there were some doubts, now the majority of Serbian independent journalists and media seems to believe that no decisive progress in improving journalists’ safety can be made without a substantial change in the government’s attitude towards independent media.

According to data from NUNS, in Serbia since the beginning of the year there have been 21 cases of attacks and pressure against journalists. It should be noted that, besides the Working group on safety and protection of journalists, in Serbia there is also a commission entrusted with the task of shedding light on several murders of journalists, the Permanent working group on protection of journalists and, on the initiative of the Serbian Ombudsman, an agreement has been reached for the creation of “a platform for registration of cases of security threats and pressure against journalists and other media professionals”.

Despite the Serbian leadership’s attempts to show its willingness to tackle the question of journalists' safety by creating various commissions and working groups, the current conditions of journalists in Serbia – especially of those who have a critical approach towards the government – are worse than at any moment in the past decades, as illustrated by the case of journalist Milan Jovanovic, whose house was set on fire in 2018.

What is truly concerning is the general atmosphere, characterised by constant attacks on independent media coming from tabloids, but also from members of the Serbian parliament, especially from the ruling coalition, which accuses journalists of being “foreign mercenaries” and treats some independent media as political opponents.

In such circumstances, in which it seems obvious that the regime is creating an atmosphere in which journalists feel less and less safe, it is not realistic to expect that journalists will be protected (only) by creating various working groups.

Serbian journalists and media are more and more aware of the fact that a key to safety of information professionals lies in a substantial change of the ruling leadership’s attitude towards independent media. It is necessary to engage in dialogue with the government, but recent attacks against KRIK and the decision of journalists’ and media associations to withdraw from the Working group on safety of journalists show that the government is not ready to change the dominant narrative in order to protect journalists, limiting itself to creating commissions.

In fact, the attitude of the ruling elite towards critical media is a far more serious problem than (non) participation of journalists’ and media associations in the work of various groups and bodies set up by the government.