The international conference aims at bringing the Balkans, Turkey and the wider post-Soviet space, from Ukraine to the Caucasus, back in the spotlight, fostering public debate on the relevance of the latest developments in these countries and regions for the state of today's Europe overall. The exodus of refugees along the “Balkan route”, armed conflicts and international interventions, threats to the freedom of information: two plenary sessions and three parallel workshops will allow citizens to engage in a dialogue with scholars, politicians, journalists, international officers and practitioners from many European countries.

The European Union, Nobel Peace Prize, measures in the Balkans and in Turkey the strength of its political project. Scholars, journalists, politicians and diplomats discuss the legacy of the Nineties and the challenges of the present. The final event of the project "Tell Europe to Europe"

The Turkish economy is growing, together with the country's influence in the Balkans, Northern Africa and the Middle East. The recent protests, however, are highlighting issues which in Turkish society remain unresolved: the level of democracy, the freedom of the press and the distribution of wealth. An EU candidate since 1999, Turkey is still waiting. Enlargement fatigue, the scepticism of some EU countries, and fear of its 80 million of inhabitants, the vast majority Muslims, are keeping her on the waiting line. But does Turkey really belong in the European Union?

Has the ICTY contributed to reconciliation in the former Yugoslavia?

In 1993 the United Nations Security Council created the International Criminal Tribunal for the Former Yugoslavia. One of the main aims of the ICTY was to “contribute to the restoration and maintenance of peace” in the region. The results of the Tribunal's work have been recently assessed by the ICTY President, judge Theodor Meron, in the last report presented to the United Nations General Assembly: “The remarkable achievements of the Tribunal [...] have contributed to bringing peace and reconciliation to the countries of the former Yugoslavia [...] forging a new international culture of accountability”. Is it so? 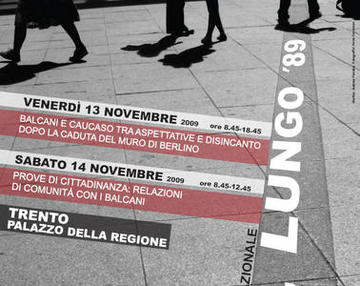 The Long-lasting '89. The Balkans and the Caucasus between expectations and disentchantment after the fall of the Berlin Wall

Twenty years have passed since the fall of the Berlin Wall, the event that marked the reunification of Europe, symbolised the promise for lasting peace in the continent, and relaunched the process of European enlargement.

The conference "The long-lasting '89" is devoted to discussing the post-communist transitions in the Balkans and the Caucasus, the expectations stirred by the end of the Cold War, the following disappointments, the ongoing processes of change, and the opportunities for relaunching a common European political project.

The first day will be devoted to reflecting on the long transitions in the two regions, national fragmentations, the return of war into Europe, and the process of European integration. The second day will explore the relationships of solidarity and cooperation between communities and territories formerly divided by the Iron Curtain.