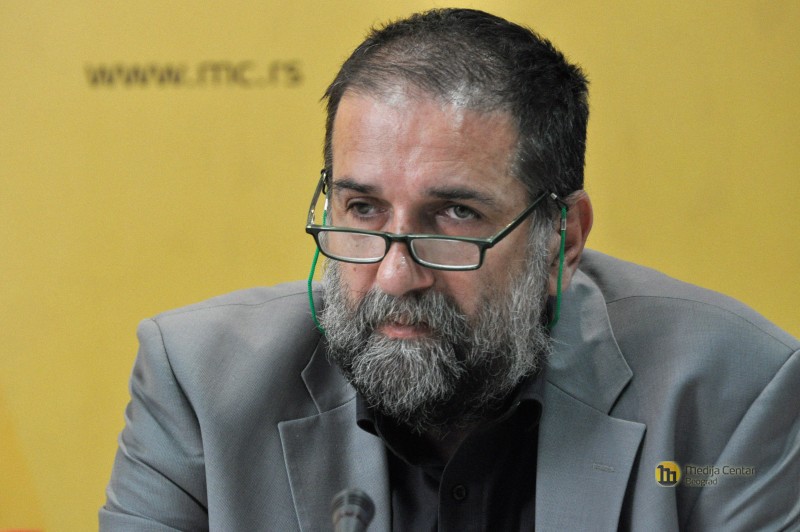 Restrictions on media freedom are becoming more and more common in Serbia. Interview with Vukašin Obradović, president of the Association of Independent Journalists of Serbia (NUNS)

According to Mr Obradović, in Serbia there are more and more cases of restriction of freedom of expression. And large part of the responsibility lies with the government. To bring a recent example, Obradović illustrates a number of restrictions of press freedom regarding the coverage of the project Belgrade on water, including: the team from portal Istinomer being prevented, without any legal basis, to report from the area of Savski kej (where the project is to be carried out); journalist Božidar Andrejić being requested to show the membership card of the Serbian Progressive Party (SNS) in order to attend the public debate on the opening of the works; Danilo Redžepović, editor of the website Teleprompter, being summoned to the police. All these examples – according to Obradović – are telling of the current working conditions of journalists in Serbia, especially of those who have a critical approach towards the current government.

Are you concerned about the situation?

Of course. Serbia's current government has not been demonstrating the democratic sensibility necessary to ensure media freedom. They do not understand that a critical public is a pillar of any modern society, hence the attitude towards journalists.

The emphasis is on a kind of national unity government that is only understood as a support to head of government Aleksandar Vučić. Any behaviour by individuals, institutions, or media that strays from this path is regarded as hostile, subversive. Such an attitude stemmed the latest incidents, that illustrate the government's general view of journalists and media.

Are these isolated incidents or is this a trend?

It is actually a general attitude towards the media or, more precisely, against a critical public. Limiting the space for public debate is a trait of this government, the philosophy of Aleksandar Vučić's political regime.

The consequences for the media are catastrophic. Freedom of expression has become a huge Potemkin village, where the facades of "European Serbia" conceal strict control of the media; a TV for private use by the Prime Minister; journalists who "hold the microphones"; warmongers recycled as editors; tabloids with their jaws open wide, ready to lynch those who do not think like them.

Against this background, the latest examples of attacks on journalists are merely consequences of the strategy to stifle freedom of expression.

As a part of the investigation into the scandal of wiretapping of opposition leader Bojan Pajtić, the police required the chief editor of the portal Teleprompter to undergo a lie detector. Is this common practice? Can such requests be interpreted as a veiled threat to journalists?

It is a dangerous precedent. Without going into the details of the entire case, insisting that Danilo Redžepović, chief editor of Teleprompter, undergoes the polygraph test is an unprecedented violation of freedom of expression and a limitation of the rights of journalists. Does this means that new practices will be introduced requiring journalists – but not only – who publish something that does not please the government? And will refusing to do so become compelling evidence that the journalist is not telling the truth?

Journalists must defend their sources, while the judiciary, by law, can investigate the authenticity of the documents released to the public. Anything else is an attack against the freedom of journalists.

During the crisis in the relations between Serbia and Croatia, unleashed by the wave of refugees, how have media behaved in Serbia?

Some media, especially tabloids (but not only), have taken advantage of the crisis in the relations between Serbia and Croatia to inflame nationalist spirits – not just with inappropriate, vulgar vocabulary, but with classic warmongering propaganda. The rhetoric that was dominant in the public opinion in those days brought us back to the nineties and reminded us of the dishonourable role of some media during the conflict in former Yugoslavia.

The media should be aware that war wounds are still fresh and that the process of reconciliation in the Balkans is not going so fast as it might seem. For this reason, it is very important that politicians put a clear stop to this kind of "journalism". Unfortunately, in fact, what they do is to inflame the atmosphere of hatred and intolerance towards neighbours.

To what extent do political power centres influence the editorial line of the media?

Over the last 15 years in Serbia, every government – without exception – has seen the media not as a part of the democratic process, "the fourth pillar of democracy", but rather as a means of gaining and maintaining power. In this sense, Vučić inherited an already developed "infrastructure" that enables him to exert great influence on the media sphere. Like his predecessors, he uses it to promote the party and, above all, himself. Vučić's obsession to always have the public's support for his reforms also requires compliant media. In this sense, he does not demonstrate neither the will nor the desire, let alone the understanding, for a social environment in which this government may also be exposed to criticism.

What about the space for public debate?

Because of this attitude of the government, the space for public debate is shrinking day by day, to the point that most publishers refused to print Slaviša Lekić's book about Vučić's "early career" as a supporter of war in the nineties. In addition, there was the cancellation of the play Koštanač due to the political inadequacy of director Kokan Mladenović. This fact reveals that self-censorship is not limited to the media, but also affects other sectors of society.

How do you assess the steps taken for the reform of the Serbian media so far?

Media reform is on its way, and we can be satisfied that the state gave up the ownership of many media introducing project financing. However, the final outcome of the reform will depend on the political will to make sure that the set of media laws will be applied in practice. If the government does not change its general approach to freedom of expression, reform of the media sector will remain only on paper.