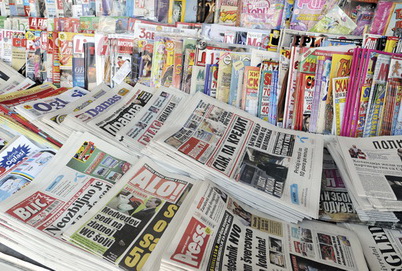 Despite the law adopted three years ago, media ownership in Serbia remains unclear and privatisation has failed to eradicate the influence of power over editorial policies

(This is a reduction of the article originally published by Beta , media partner of the ECPMF project, on March 31st, 2017

Despite the much-trumpeted media reform of 2014, the Media Association of Serbia denounces the persisting opacity of media ownership in the country. Meanwhile, the Ministry of Culture announces changes to the laws regulating the information industry.

Dalila Ljubičić, director of the Media Association, stresses that the reform of 2014 and the establishment of the Media Registry, managed by the Agency for Economic Registries, failed to facilitate the dissemination of information on media owners.

"We now have a Registry that is neither up to date nor functional and, worse still, there are strong doubts as to the validity of the information collected in the registry, due to incorrect entries and the lack of standardisation of the data entered. And nobody is accountable for all of this", says Dalila Ljubičić, arguing that it is increasingly important for the public to have clear and detailed information not only about the identity, but also about the interests of media owners.

State Secretary for Media Nino Brajović admits that reforms have not been successful in this area, especially because of the mild sanctions for those who do not comply with the new regulations – if the owner of a media outlet decides not to file information to the Registry, the only consequence is the loss of the right to receive economic support from the state, which is why most media do register. "Unfortunately, even registration is not a guarantee of the true ownership of the media, but in these cases it is a violation of the law", says Brajović.

Media privatisation in Serbia ended last year. Out of over 70 media outlets to be privatised, 50 were put on sale – of these, 34 were actually sold, while the others were closed. Only a limited number was offered to employees.

Journalist associations have raised a number of objections to the privatisation process, especially because local media were bought by government-friendly tycoons, with the consequent increase in power's influence over their editorial policy – an outcome spectacularly opposed to the original goal.

Some transparency on ownership was introduced, but no solid mechanisms that take into account the public interest and the need to contain the influence of politics on editorial policy, especially when it comes to local media.

The uncertainty about ownership structures also involves state participation, for three outlets in particular – newspapers Večernje novosti and Politika (of which the state, despite an explicit legal ban, maintains a significant share) and press agency Tanjug, which was formally closed by government decision, but continues to operate, broadcast, and use resources from public companies and state institutions.

Večernje novosti and Politika remained partially owned by the state because no investor was found willing to take over from the institutions. 60% of Vecernje Novosti is owned by three foreign companies of unclear profile (an investment fund and two international companies), while Serbian businessman Milan Beko admitted to being the owner over a year ago. The company's performance is marked by controversies, political interference, and debts.

Half of Politika's shares went to Russian East Media Group in 2012, about which extremely limited information is available. The publishing group was registered in Moscow in the year that it bought the shares of Politika, and to date the political interests behind this transaction remain unknown.

Dalila Ljubičić believes that this situation, which is presented to the public as the Gordian knot, could be resolved much faster and more easily than it is usually argued. "The organisation only operates in Serbia, and is therefore only relevant in the national territory – this makes it hostage to local politics. Since Serbia is frequently voting, the solution to this issue has been postponed year by year", she points out.

The agency has been operating for nearly a year and a half outside the law, since it had been prescribed for it to close due to failed privatisation. There is no clear and convincing answer as to the legal basis that allows Tanjug to establish deals, receive money, and hire staff.

Ljubičić also claims that Tanjug is "something that law students will analyse in the future. The generations to come will be amazed at how such a thing was possible in the 21st century". Secretary of State Brajović, on the other hand, believes that this agency deserves a chance: "It should be maintained despite the failed privatisation. It could become a joint-stock company or a limited liability company with the majority of state ownership".