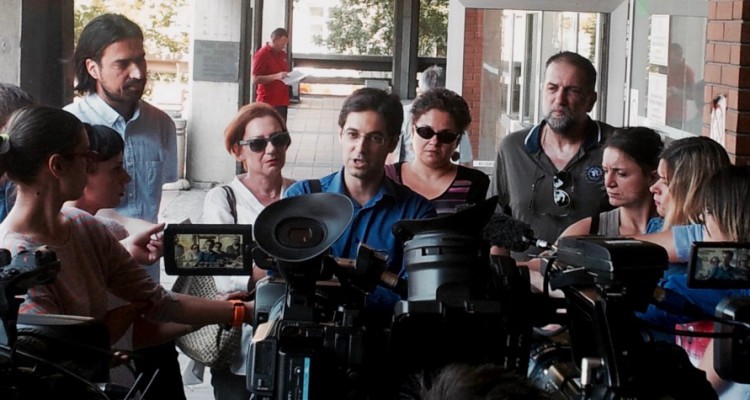 Media lynching for those who do not toe the government line, judicial authorities that do not protect citizens, independent journalists accused of conspiracy. This is Vučić's Serbia

"We will use all the legal instruments at our disposal and, if we cannot achieve anything in Serbia, we will appeal to the European Court of Human Rights", said journalist Antonela Riha , one of the six public figures – journalists, non-governmental organisations, and actors – who sued the tabloid Informer and the national broadcaster TV Pink after being accused of planning to overthrow the constituted order and a coup. The lawsuit was filed over a year ago, but so far it has not been accepted by any judicial body.

In addition to Antonela Riha, the lawsuit was filed by two other journalists – Vukašin Obradović (former president of the Independent Association of Serbian Journalists, NUNS) and Tamara Skrozza; Ilir Gaši, director of the Slavko Ćuruvija Foundation; and actors Sergej and Branislav Trifunović. On June 9th, 2016, their photographs, accompanied by their names, appeared on the pages of Informer in an article titled "Kreće ubijanje Vučića" (Vučić's elimination begins). The following day, they were cited in another article published on same tabloid, "Zavera protiv vlasti u Srbiji" (Plot against the Serbian government). Both articles were reported by Pink TV and various nationalist media and web portals as well as by the official sites of some ultra-nationalist organisations.

The people accused have experienced the attack as an exhortation to lynching and as a threat to their safety, as it exposed them to the risk of aggression by anyone convinced that they are actually plotting against the constitution or the President. However, the courts do not feel that there are sufficient reasons to initiate an investigation. Recently, also the Belgrade prosecutor refused to deal with the case. Now, Riha and the others intend to turn to the Constitutional Court, the highest court in the country. If this does not produce any result either, they will appeal to the Strasbourg Court.

What particularly disconcerts the filers is that the prosecution rejected their complaint arguing, among other things, that the consequences of the allegations have not manifested yet. According to this interpretation, the court can only intervene after one of them is attacked and beaten in the street. Obviously, safety concerns are the main reasons they decided to turn to the judicial bodies in the first place.

The group of journalists, actors, and activists accused of conspiracy by the pro-government media was officially informed that the state does not believe there are reasons to proceed legally in this case. Indirectly, this implies that the authorities do not take the conspiracy allegations seriously. Nonetheless, no one will explain to the public that these were unfounded allegations, while the judiciary continues to ignore the safety concerns of the "accused".

What all of them have in common is that they do not hesitate to openly criticise the Serbian government. That is why there is widespread conviction among journalists that this is a well-orchestrated campaign aimed at silencing dissent in the public debate and ensuring compliance with the support of pro-government media, thus preventing any inconvenience to the government and other power centres.

"As long as journalists of the pro-government media will be exempted from any criminal responsibility for what they write, there will continue to be gossip, lynching, and anger towards those who think critically", Vukašin Obradović told Belgrade daily Danas. According to Obradović and the other filers, not only does this behaviour violate the law, but it also jeopardises the safety of targeted people. "These allegations are a great danger to our safety, but the institutions do not pay attention. These are not harmless rumours", Obradović said.

In Serbia, tabloids are routinely used by the government and other power centres as a weapon against non-aligned journalists, but also against political opponents and many independent organisations. Citizens who find themselves targeted on tabloid pages by unsubstantiated allegations of conspiracy and various other crimes turn to the institutions in an attempt to obtain some legal protection. The inaction of the courts is regarded by independent journalists as a demonstration that the government is striving to discipline the judiciary as well as the public opinion.

The public opinion has not paid much attention to the story – which is rather worrying, as it proves that media lynching is perceived as a common phenomenon there is little to do about. As a consequence, the already weak and disorganised opposition, NGOs, and other critics of the government can be publicly slandered at any time, without any possibility of defending themselves or resorting to legal protection.

It is in this climate that the media close to the government have begun to put pressure on "disobedient" journalists to deal with issues set by tabloids. For weeks now, a denigration campaign has been conducted against actor Sergei Trifunović, one of the filers, who – disgusted by the fact that the court had time-barred a lawsuit filed by the parents of a boy who committed suicide because he was bullied – tweeted: "But what GDP are you talking about? What economic growth, what fight against crime? I'll pee on your tombs".

The tweet was posted after President Vučić had reported the data on the alleged successes of the national economy, and was therefore immediately interpreted by tabloids as an explicit attack to the head of state, an invitation to his assassination. Later, during press conferences organised by the opposition, journalists of the pro-government media insisted for all government opponents to take position against the controversial tweet, labelling all those who did not take part in the campaign against Trifunović, including the media that chose to ignore it, as conspirators. Vučić himself strongly attacked Trifunović during a television programme where he was the only guest.

Trifunović, on the other hand, did not have the opportunity to appear in the mainstream media, but explained on TV channel N1 that the tweet was just a metaphor, a way of protesting against the fact that the suicide of a bullied boy victim had not been adequately investigated, nor had the perpetrators been punished. The controversial tweet is, in fact, a paraphrase of the title of a novel by Boris Vian, I'll spit on your graves. Sergey Trifunović is also an official of a new opposition party, Pokret Slobodnih Građana (Movement of free citizens, PSG), and this is probably another reason of the intensifying attacks against him.