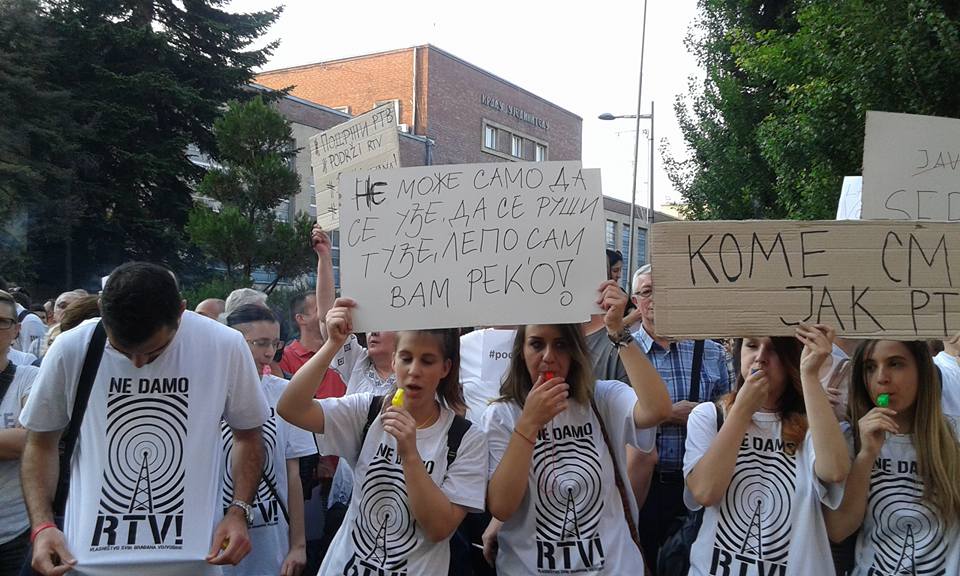 Thousands of citizens protested in Novi Sad for the dismissal of some managing editors of Radio Television Vojvodina, one of the last media that resisted government control

Since the political majority switch in Vojvodina after the elections of April 24th, a change was expected also in the managing editors of Radio Television Vojvodina (RTV). This is standard practice in Serbia, especially in the two public service media and in the media co-owned by the state. However, the manner in which the winners of Vučić's Serbian Progressive Party replaced RTV's editors overnight led to protests by over 100 employees, demonstrations of support from colleagues throughout the region, and protests by several thousand citizens of Novi Sad. On Monday, May 23rd, people gathered in front of the television building to sign a request of television journalists to immediately remove the newly appointed Board of Directors and the new editors.

Unlike the Radio Television of Serbia (RTS), based in Belgrade and controlled by the government both financially and politically, the RTV of Novi Sad, capital of Vojvodina, has resisted this influence due to the fact that the government of this province of Serbia, since the fall of Slobodan Milošević's regime in October 2000, had always been in the hands of the coalition led by the Democratic Party, at the opposition after the last administrative elections.

Ten days after the elections, on May 4th, RTV editorial director Slobodan Arežina had been replaced by a Board of Directors ad-interim, appointed a few days before the elections, on April 19th, by decision of the Organ of regulation of electronic media (REM), which is under direct influence of the Belgrade government.

That occasion had already hinted that the Prime Minister was laying the ground for taking control of the umpteenth Serbian media.

This was already clear, however, for those who worked at RTV. At the beginning of April, General Director Srđan Mihajlović had sanctioned journalist Svetlana Božić Krainčanić with a reduction in salary because, at a press conference, she had asked the Prime Minister a question formulated by an NGO that was protesting outside the government headquarters. The journalist had asked Vučić what few of her colleagues in Serbia would dare ask – what he thought of the project of "Greater Serbia" that he supported during the wars of the nineties, when he was general secretary of the Serbian Radical Party of Vojislav Šešelj, and whether today he distanced himself from that political vision.

More on media freedom in Serbia is available at the Resource Centre on Freedom of the Media, a project promoted by OBC together with the ECPMF centre in Leipzig. Materials include an analysis of the forms of indirect censorship that affect the media in the country and the report of the South-East European Media Observatory on the abuse of public funding as a control tool over editorial policies.

The removal of Slobodan Arežina was followed, day after day, by the dismissal of journalists and editors of news programmes. Eventually, 18 prominent RTV employees will not be doing what they did until last month. Some of them said they were contacted by telephone to be informed that from the next day they would no longer lead or write their programmes. For the new administration, these people have worked "in a non-professional, unbalanced, biased manner", leading to a drop in viewing figures.

However, the facts beg to differ. In recent years, it was this very group of editors and directors, together with a team of young journalists, that successfully transformed a local public service into a widely followed outlet. According to Arežina, over the past four years, ratings have grown by as much as 45% compared to 2010. This has also been due to most media becoming the speaker of Aleksandar Vučić since he came to power four years ago.

This situation was also highlighted by an investigation of the BIRN website, which showed how, during the election campaign, the most popular channels (RTS, Pink, and B92), aired mainly statements by Vučić for two weeks. It is estimated that, only in the news, 121 statements by the Prime Minister were broadcast, for a total of 67 minutes. Vučić was followed by leader of the Socialist Party of Serbia and Foreign Minister Ivica Dačić, who only got around 7.3 minutes and 19 statements.

But it is not just about the election campaign. Over the last four years, the Serbian government and Prime Minister have dominated the most popular media and every "dissonant" voice is deemed by Vučić as an attack against the state. Every person who criticises him is, sooner or later, targeted by the pro-government media.

RTV, instead, had managed to keep programmes with debates and different opinions, but also with reports that spoke openly of the problems not only of Vojvodina, but of the entire country, and with interviews – all journalistic practices that have disappeared from national TV stations. What they failed to do, as stated by Slobodan Arežina when he was replaced, was to interview the Prime Minister. Even when he came to Novi Sad, he ignored the invitation to answer the questions of journalists of Vojvodina's public service. In this, they were not alone, as Vučić introduced the media practice of going to studios where journalists chosen by him would ask questions that, in most cases, were prepared beforehand.

"It seems to me that for the first time things are done according to the law", briefly replied Vučić when asked about the dismissals. Yet, this is not true either. The new board was not chosen by an open competition as required by law, but "enjoys ad interim status, which is a transitional solution, and had no right to do what it did", said a press release by over a hundred RTV employees who protested against the replacements.

Despite the support of Serbian and international journalists' associations and the solidarity of citizens and the public, rebelling RTV journalists are not confident in the success of their actions. Aleksandar Vučić recently obtained by the citizens another mandate to form a new government, and enjoys international support for his pro-European policy, despite the fact that his decisions and actions often violate the European rights of freedom of expression and information.

The programming of RTV has already been adapted to fit the government, and the authors of the programmes only await the moment when those who used to run these very programmes find another job – or end up on the street, like many colleagues who did not agree to submit their profession to the interests of a party and its great leader.