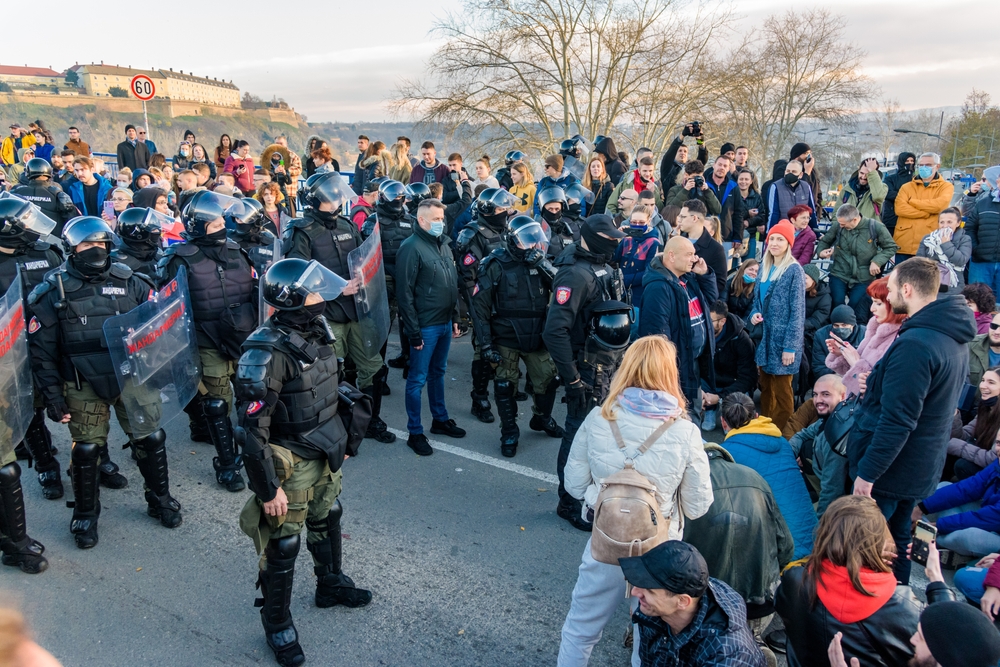 The recent events in Novi Sad, where a citizens' protest against the application of the new Master Plan was severely repressed by the police and private guards, confirmed the tendency of Vucic's regime to use violence to suppress dissent

For months, activists and citizens of Novi Sad, the capital of Vojvodina, have protested against the proposal of the new General Master Plan (PRG) which establishes the long-term strategy for the development and urban planning of the city and regulates construction on the municipal area.

One of the main objections raised by citizens and activists to the PRG proposal, presented to the Commission for Spatial Planning, concerns a residential complex that should be built directly on the Danube, in a protected area. According to critics, the project was conceived as an investor-friendly one, was christened "Novi Sad on the water", alluding to the controversial “Belgrade on water” project – a complex of towers and buildings that ruined the skyline of the capital – carried out by the Serbian government in a way that is anything but transparent.

Reacting to the protests of citizens, mayor of Novi Sad Milos Vucevic, member of the Serbian Progressive Party (SNS) led by President Vucic, said that the PRG was elaborated by the experts, but that "the final word rests with the politicians".

And indeed, during a session of the Novi Sad city council held on 21 July, the vast majority of the elected councillors in the ranks of the SNS voted in favour of the PRG, thus putting an end to the procedure.

While the session was still in progress, about a hundred citizens gathered in front of the municipal council headquarters (Banovina Palace). At one point, they tried to enter the hall where the session was held, clashing with the police. Some threw green paint at the deployed agents and – according to media reports – took possession of the riot shield of one of the agents.

At that point, private guards arrived, that is some men in civilian clothes, for the most part without any badge, who hurled themselves against the citizens who were protesting. A video  showing some of them throwing one of the protesters to the ground, then putting handcuffs on him, while another pressed his knee to the protester's neck and head, aroused particular bewilderment among those following the protest on social networks and independent media, as the gesture reminded many of the US police violence that led to the death of George Floyd.

On the same day, some media reported that those guards, presumably employees of the private company Intersec Team, were allegedly hired by the municipal administration as security officers. Some opposition parties and non-governmental organisations have filed a complaint, accusing them of illegally carrying out private security activities, as private security officers can only supervise the entrance and inside the building, and certainly cannot attack citizens who exercise their right to demonstrate freely.

Police officers were also accused of resorting to violence during the protest on 21 July, charges that were promptly rejected. "Thanks to the professional and effective intervention of police officers – reads a press release issued by the Ministry of the Interior – it was possible to avoid a violent raid by demonstrators at the meeting of the city council".

President Vucic went even further the day after the protests, saying he was convinced that among the demonstrators there were also some "people who had already broken into the Vojvodina city council and parliament building, throwing firecrackers and tear gas". It is not yet known with certainty how many demonstrators have been placed in custody and if any of them have been prosecuted.

Exactly one week after the first protest, on Thursday 28 July, another demonstration took place in Novi Sad, and this time the authorities did not intervene violently. The march, much more attended than the first protest, crossed the streets of the city – where there was no trace of the presence of the police – to end in front of the SNS headquarters. Participants threw buckets of paint against the entrance facade, calling for a referendum in which the citizens of Novi Sad can have their say on the PRG. The demonstrators also called on the prosecutor’s office to launch an investigation into the excessive use of force during the demonstration on 21 July.

It is not the first time that the authorities have reacted brutally to the protests of the citizens and that men in civilian clothes, without any identification, beat demonstrators. The violence we witnessed in Novi Sad recalls in some ways the events of 2017 when, during the demolition of some buildings to make room for the controversial commercial-residential complex "Belgrade on water", some men with balaclavas on their heads, armed with telescopic clubs, stopped many citizens found in the area, forcing them to get off their cars, taking possession of their identity documents and cell phones. On that occasion it became clear, for the first time, that in Serbia, in addition to the regular police, there is also a para-police charged with defending the affairs of power.

Also in 2017, during the swearing-in ceremony of Aleksandar Vucic as the new president of the Republic, some journalists and citizens considered unwelcome were violently  dragged away by members of the security service of Vucic's party. Over the past decade, since Vucic came to power, such violent interventions have become commonplace not only during various public events, but also during elections . In fact, it has happened several times that some men in civilian clothes tried to intimidate and physically mistreat citizens at the polls.

In the summer of 2020, the protests organised in Belgrade against the contradictory measures to combat the pandemic from Covid 19 introduced by the Serbian government – also accused of trying to hide the actual number of infections and deaths from Covid – had resulted in clashes for several days, between demonstrators and police, then joined by men in civilian clothes.

The authorities had also reacted with extreme brutality to the protest organised in Sabac in November 2021 against an opaque agreement between the Serbian government and the Rio Tinto company for the exploitation of lithium deposits in the fertile valley of the Jadar River. The demonstrators had blocked traffic on a bridge and, once the police withdrew, some masked men, armed with bars and hammers, had began to beat the citizens. At one point a man aboard a bulldozer had tried to force the blockade  of the demonstrators.

These are just some of the episodes featuring hooligan groups and private security officers hired by the government. The epilogue of such incidents usually consists in sanctioning those who dared to protest. As for the sanctions against the perpetrators of violence, to date it is not yet known whether any criminal proceedings initiated against those who beat the demonstrators have ever had an epilogue.

Usually, after the violence, the government allows further protests to take place without intervening aggressively, and then other scandals break out that divert attention from the protests.

In this whirlwind of corruption, protests, violence, riots, and denials, Vucic's regime sends a clear message: force is in the hands of the state and power is in the hands of the government that act without any public debate and without taking into account the opinion of experts and citizens – including with violence.