Serbia: the opposition seen as an enemy 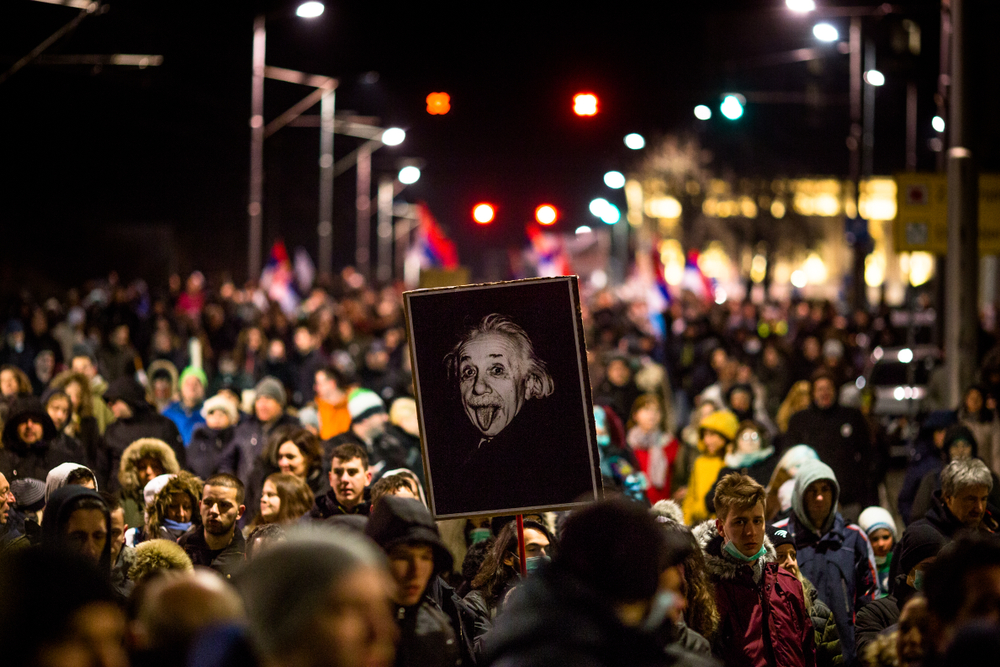 Opposition protests against Vučić's government continue in Serbia. But the manipulations, mainstream media's propaganda, and the government's hate speech are likely to lead to violence

"So tell me where I need to go. I come alone and the five of you can beat me up", said Serbian president Aleksandar Vučić during a press conference, commenting on statements by opposition leaders. President Vučić's invitation is addressed to sociologist Jovo Bakić, a fervent critic of the current situation in Serbia, and opposition leaders Vuk Jeremić, Dragan Đilas, and Boško Obradović. Vućić launched the controversial invitation in response to a recent interview given by Jovo Bakić to weekly NIN, in which the sociologist said that the tension in Serbian society is increasing and violence seems inevitable. "In my opinion, in Serbia surely there will be clashes [...] We will run after those scoundrels who have robbed the country and deceived the people", said Bakić in the interview.

During the same press conference in which he challenged his political opponents to a physical confrontation, Vučić said he was astonished by the silence of the prosecutor's office in the face of statements such as those made by Bakić, adding that opposition leaders, in power until some years ago, continue to exert influence over prosecutors. An immediate reaction from the police followed which, at the prosecution's request, summoned Bakić for an interrogation. The police gave Bakić the notice of convocation while he was at the Faculty of Philosophy in Belgrade, where he teaches sociology, despite the law forbidding members of the police to enter university premises without prior consent by the rector.

Vučić's claims that some state bodies, including judicial ones, would be under the control of the opposition, and for this reason would be reluctant to proceed against government opponents, are an integral part of the campaign conducted by the Serbian president against the opposition. The way in which the police and the prosecutor's office acted against Bakić shows that state institutions actually act behind the impulse of the leadership in power.

After the interrogation, Bakić told reporters that he was summoned by the police because of an interview with weekly NIN, or because of the way this interview was interpreted by the pro-government media, according to which Bakić alleged that opposition members should break into the headquarters of Serbia's Radio and Television (RTS) armed with rifles. "I never said that, but I repeat everything I told NIN, and I am willing to confront anyone in court", said Bakić. Bakić, in the interview in question, expressed his positions with a rather radical language, but this does not justify the assertion that he would be willing to organise and lead violent actions against those who think differently and for this should be questioned by the police or the prosecutor's office.

Behind the whole story lies the government's desire to present its political opponents as violent and traitors and, at the same time, to provide an image of itself as the main actor involved in the fight against violence. This campaign also directly involves president Vučić. Opposition leaders and other opponents and critics of the government, on the other hand, have no chance of accessing the mainstream media – which cater to about 80% of Serbian citizens – to express their positions.

Vučić cited the three opposition leaders talking about Bakić's interview in order to convince his supporters that those who criticise the ruling coalition and himself are all equally prone to violence. In an interview released a few days after the aforementioned press conference, Vučić stated that he had not challenged his opponents to a physical confrontation, but had invited them to beat him and stop threatening the people.

Vučić's invitation to his political opponents – besides being difficult to achieve, as there is a regulation on the protection of the security of state officials – is unacceptable because it alludes to violence as a means of managing conflicts between political opponents. The insistence by government officials and pro-government media on the alleged propensity of government opponents to violence is an integral part of a campaign to manipulate public opinion. Professor Bakić's interpretation of the possible evolution of the situation in Serbia, despite its strong tones, is based on the sociological analysis. However, representatives of power took advantage of his propensity to use radical language to present him as the leader of a violent group and a threat to national security.

The leadership's rhetoric is aimed at turning the opposition into an enemy and has led to an increase in politically motivated violence, perpetrated mostly by government supporters. Data show that most victims of recent violence are opposition activists. In early June, after an anti-government protest in Novi Sad – where citizens took to the streets to protest for months – one of the organisers, Dejan Baragić, was brutally beaten. Head wounded, bleeding, he was transported to the emergency room, where he was held in observation. A few days earlier, two students and activists, Marko Đelević and Mihajlo Nikolić, had been beaten in Novi Sad. The two of them had also been transported to the emergency room with head injuries.

Many other organisers of anti-government protests have been attacked in recent months, including Dalibor Stanojević from Knjaževac, Milan Blagojević from Žitorađa, Strahinja Ćirić from Negotin, and Vladimir Petković from Zaječar.

Anti-government protests began in December last year after a violent attack on opposition figure Borko Stefanović, who was hit in the head with an iron rod during a party meeting organised in Kruševac. This incident prompted opposition leaders to engage more actively, although protests were initially organised by civic movements and individual activists.

In recent months there have been other episodes of intimidation that are not directly linked to the protests but involved the representatives of the ruling coalition. Marija Lukić – who publicly denounced the sexual harassment by the mayor of Brus Milutin Jeličić Jutka, who is also an official of the ruling party (the Serbian Progressive Party, SNS), towards women employed in the municipal administration – became the target of threats from Jeličić's supporters, without ever receiving any protection from the state. Journalist Milan Jovanović, the owner of a portal critical of the municipal administration of Grocka, near Belgrade, had his house set on fire a few months ago. At the end of the investigation carried out by order of the prosecutor, the police announced that they had identified the mayor of Grocka Ljubodrag Simonović as the instigator of the intimidating act.

Jeličić and Simonović were forced to resign, and the latter spent some time in prison. However, both managed to maintain their political power to some extent, and their supporters organised several rallies to support them. The governing coalition has not reacted adequately, nor has it condemned what Jeličić and Simonović have done, and just claimed that the two have the right to participate in public life as they have never been convicted. Meanwhile, a street in Grocka was named after Simonović and his brother, thus sending public opinion a clear message: members of the governing coalition continue to enjoy protection even when they are involved in acts of violence.

Statistics on acts of violence committed by the representatives of power were collected by the Association of Free Councillors, which gathers the members of the municipal councils that do not come from the ranks of the ruling coalition. "We are concerned by the continuing crisis, violence, aggression, lack of dialogue, internal divisions in society, and the division between 'us' and 'them'. You are no longer able to handle all the consequences of your actions. You are no longer able to control those who believe you when you say that citizens, public characters, and politicians who have a critical attitude are 'enemies of the state', 'traitors', 'mercenaries', 'thieves', 'fascists', 'scoundrels', to cite only some of the terms you are using to label those who think differently. You must realise that you have sown hatred very deeply and that there are people who believe it. And you can't control them", reads an open letter sent by this association to president Vučić.

Despite the fact that it is becoming increasingly clear that violence is slowly and systematically entering the country's political life, appeals such as the one launched by the Association of Free Councillors are unlikely to elicit the desired reactions in the present climate. The reactions of the head of state and government officials to some statements by opposition figures show that there is no serious intention to establish a dialogue with political opponents and that part of society that is critical towards the government. This situation will inevitably lead to a further increase in tension in Serbian society, and consequently to greater instability. The government is trying to put all the blame on the opposition, accusing it, among other things, of inciting violence and rejecting dialogue. The government's goal is to convince both local public opinion and the international community of its commitment to defending the rule of law and freedom of the media while blaming the opposition for all the problems that plague the country.

While this strategy – above all thanks to the control exercised by the government on the mainstream media – is giving the expected results on the local political scene and has convinced most of the population that the opposition is the root of all Serbia's problems, things are different as regards the international community. In its latest report on Serbia's progress in the accession process, the European Commission has not spared strong criticism of the work of parliament and the functioning of the rule of law and the judiciary, expressing concern over the deterioration of media freedom. Freedom House also noted a worsening of the media situation in Serbia. In fact, according to its latest report on the freedom of the press in the world, Serbia has lost some positions compared to the previous year.

In its first reactions to the publication of these two reports, the Serbian government expressed first surprise and then strong criticism, claiming that they do not correspond to reality. However, after the publication of these documents, members of the government invited the opposition to dialogue in parliament, but it is unlikely that the opposition will decide to accept the invitation and interrupt the parliamentary boycott. Opposition MPs have been constantly marginalised and humiliated, and a single call for dialogue and an announcement by parliamentary president Maja Gojković will hardly be enough for things to change. It is logical to expect that the opposition will ask for more solid guarantees and insist on the need to engage in dialogue with the highest state officials.