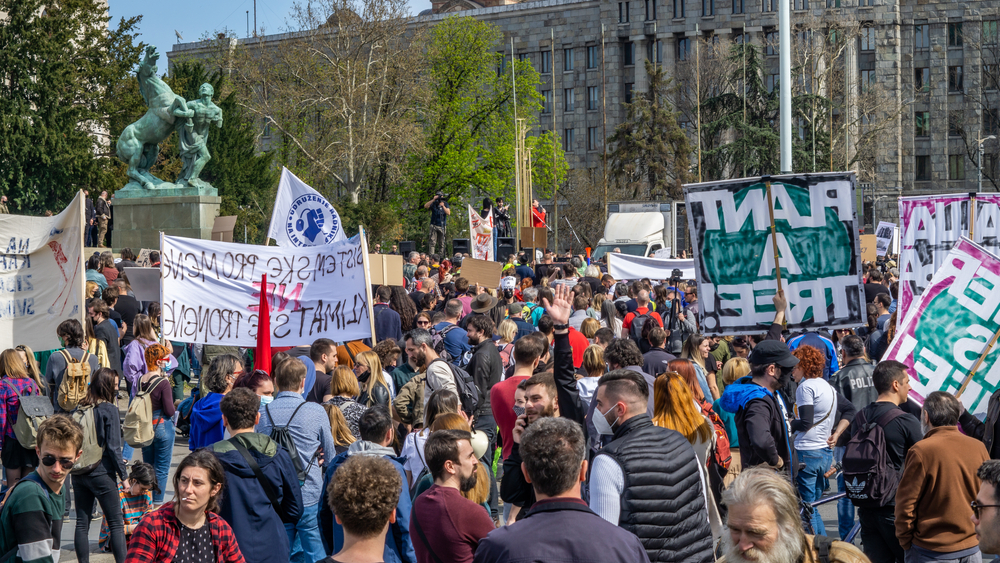 The protests in Belgrade on April 10 - photo © Stefan Milivojevic/ Shutterstock

Last April 10, thousands of citizens took to the streets of Belgrade for what has been called the "Ecological Revolt". The environmental issue was brought to the political level. Will the opposition be able to intercept this civic momentum?

The demonstration called "Ecological Revolt", which took place in Belgrade last April 10 with the participation of thousands of citizens, raised many questions in local public opinion. The organisers sough to draw attention to the environmental risks linked to Serbia's increasingly apparent transformation into a "safe place" for polluting technologies. Notably, perhaps for the first time, the leadership in power was unable to respond effectively to messages and requests made during an anti-government protest.

In her first reaction to the protest, Environment Minister Irena Vujovic resorted to the usual rhetoric used by the government in similar situations.

"Behind the false concern for the environment are the protagonists of a failed policy and the false environmentalists, often supported from abroad. Whatever I do as Minister of the Environment, whatever the government decides, they will remain true to their political agenda”, Vujović said .

Prime Minister Ana Brnabic has taken a slightly different stance, saying that ecology is a "very important" issue that shows how much Serbia has changed. "This shows that in Serbia the emergency is no longer jobs and pensions, because when you start worrying about the environment, you have First World problems", said Brnabic.

It is interesting to note that President Vucic did not comment, despite being repeatedly mentioned during the demonstration. Instead of reacting abruptly, as he has always done so far, the Serbian president tried to downplay the importance of the protest by posting on his Instagram profile a photo – taken just while the demonstration was in progress – which shows him in the company of his Secretary for Information Suzana Vasiljević, Prime Minister Ana Brnabic, and Minister of Finance Sinisa Mali during “a light brunch ”.

However, it seems that this brunch did not go down well with Vucic, especially after receiving information on the reactions of citizens to the protest held in Belgrade. Always an avid reader of public opinion polls, Vučić immediately took concrete action.

Three days after the protest, the Jama mine on Bor in eastern Serbia, managed by Chinese company Zijing, was closed with the intention – as Energy Minister Zorana Mihajlovic explained – to protect the environment. Mihajlovic urged the Zijing company not to take any action without the authorisation of the Ministry of Mines and Energy and to ensure that they are in possession of all permits issued by the Ministry of the Environment.
Minister Mihajlovic also said she was "happy that activism exists and that citizens are concerned about the quality of the air and the situation of rivers in Serbia".

Another aspect to stress is that the Serbian tabloids have not launched any smear campaign against the participants in the "Ecological Revolt", which until now was unimaginable, because the tabloids have always sided with power, even in much lighter situations.

All this suggests that ecology has become a legitimate political issue in Serbia and that the messages and lessons to be learnt from the recent protest may prove to be very important not only for the government, but also and above all for the opposition which, despite the growing discontent in society, remains unable to bring together as many people as were present at the protest.

About the "Ecological Revolt"

The "Ecological Revolt" stems from a series of civic initiatives recently organised throughout Serbia, including the revolt of a group of citizens gathered in the movement "Let's defend the rivers of the Stara planina" against the construction of small hydro-power plants, protests against pollution organised in Belgrade and some other cities, and the mobilisation against the Rio Tinto company's project to open a mine of jadarit [a new mineral discovered in the Jadar river area, ed] near the border between Serbia and Bosnia and Herzegovina .

These local movements are inspired by civil and ecological activism and – most notably – have not embraced the slogan "Dole Vučić" [Down with Vucic].

The organisers of the demonstration, gathered in about seventy organisations, sent the government a list of 13 concrete, clear, reasonable, and understandable requests for (almost) all Serbian citizens.

Both the government and the opposition could draw numerous political lessons from this initiative. Although there is no green party in Serbia capable of capitalising on the recent protests, the government should realise that it is unable to give an adequate response to civic initiatives and that it faces a much more powerful opponent than its traditional opposition.

As for the opposition, on the other hand, the recent protest clearly showed that, instead of engaging in futile controversies and struggles between vain leaders, the opposition forces, if they want to seriously challenge Vucic, should devote much more attention to citizens and the problems that affect them closely, including environmental issues.

Whoever is able to better understand the messages of the "Ecological Revolt" will certainly draw political advantages from this non-partisan demonstration.

What is certain is that Serbian citizens who have been able to face the cruel truth about the dangers of uncontrolled investment and the lack of environmental protection have gained the most from ecological mobilisation. Even if the protests do not continue, environmental issues have been definitively placed on the agenda and neither the government nor the opposition will be able to ignore them anymore.