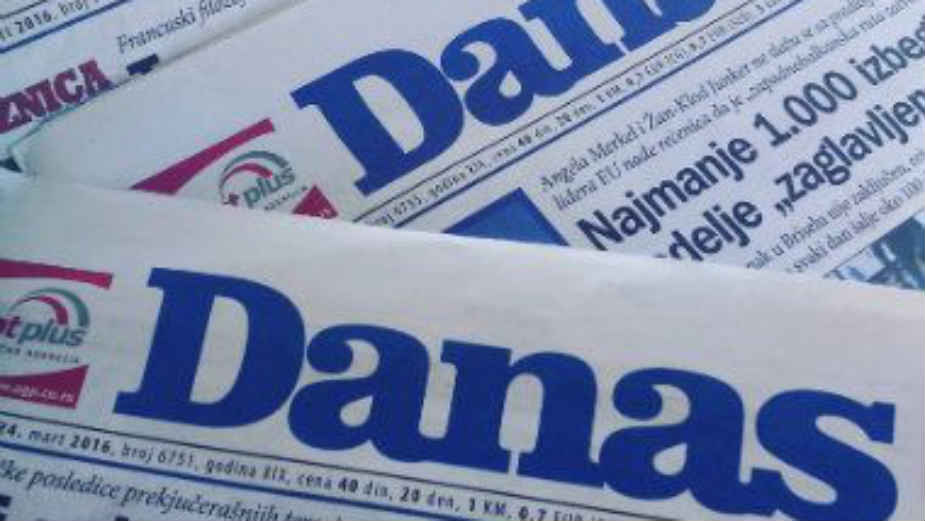 During the inauguration ceremony of the new Serbian president, some journalists were attacked and prevented from doing their job. An analysis

Last June 14th, the European Parliament adopted a resolution asking the Serbian government to "publicly and firmly condemn all attacks against journalists and the media, ensure effective investigations, and bring those responsible to justice". The day after, Aleksandar Vučić condemned the attacks on journalists that happened during his inauguration ceremony as President of the Republic. However, his statements – and those of his party's officials – failed to convince the Serbian public of the sincerity of this position.

On the day of the inauguration, on May 31st, some individuals physically mistreated six journalists, in front of the police, preventing them from doing their job. It turned out later that they were part of the security service of Vučić's Serbian Progressive Party (SNS). These agents, without displaying the identification badges prescribed by the law, were in charge of ensuring the safety of Vučić's supporters, gathered in front of the Parliament building.

"The police cannot help you"

However, the crowd was not just formed by Vučić's supporters – activists of the movement "Against dictatorship" and members of some opposition parties were also there. A journalist from the daily Danas, realizing that some men were attacking one of the demonstrators, tried to film the scene, but a man – probably a member of the "security" – grabbed her by the shoulders and took her away.

Reporters of portals Insajder and VICE, also present, witnessed the same incident. They were threatened by some men and told that they would be physically attacked if they tried to "leak anything to the public". The journalists pointed out that they were just doing their job and they would call the police, but they were told, as reported by Insajder, that "the police could not help them". In fact, the policemen watched the scene motionless and silent, staying put even when journalists asked them to intervene. A journalist from the portal Espresso found herself in a similar situation.

Approximately two hundred metres from the scene, a journalist from Radio Belgrade was reporting about the gathering of citizens protesting against the new president. Citizens were physically assaulted by a dozen men who prevented them from approaching the Parliament. When the journalist asked who they were and in what capacity they were acting, they just pushed her and pulled the recorder out of her hands. In this case too, the police just watched.

After it became known that journalists and citizens had been attacked, the police declared that "given the numerous and inaccurate statements [...] on the fact that the police did not take appropriate measures […] the Ministry of Interior wishes to inform the public that these statements are tendentious, inaccurate, and malicious".

Danas filed a complaint against the SNS as organiser of the event where its journalist was attacked; journalist associations sent protest letters and president Vučić apologised "if some journalists were attacked".

"Journalists as part of a scripted scenario"

On June 13th, two weeks after the facts, Danas published the photographs taken by the photojournalist who filmed the entire incident. The images show clearly how the journalist and the protesting citizens were forcibly "removed" from the rally in support of the new president. The police and the prosecution later stated that they had identified and questioned all the people in the footage, and nothing else has been divulged so far about the ongoing investigation.

The media controlled by Vučić's party have shifted the attention from the manhandling of journalists and the police's inaction to the presence of the few citizens gathered to protest against the new president. Vučić himself, after the inauguration, devoted much more attention to the protesters, stating that the responsibilities for the incident "also fall on those who came to provoke and wanted to trigger a massacre".

Vladimir Đukanović, an MP from the SNS, took it a step further and, in his column for pro-government daily Blic, wondered how it was possible that some journalists "found themselves just when and where the provocateurs turned up". He then concluded that "the entire scenario had been prepared in advance" and that journalists were there " to capture the intentional incident".

Despite the condemnation of the attack by president Vučić, SNS official and president of Parliament Maja Gojković refused to put attacks against journalists on the agenda of the Committee on Culture and Information.

Over 30 cases of pressures, threats, and attacks against journalists in 2017

According to data from the Independent Association of Journalists of Serbia (NUNS), "in 2016, 36 attacks on media professionals were reported, including 9 physical attacks, 26 verbal attacks, and 1 attack on private property".

Only in the first half of this year, as pointed out by NUNS president Slaviša Lekić, "in at least ten cases, colleagues were prevented from reporting, as either they were not invited to an event or they were forbidden to attend a public event. Since the beginning of the year, the NUNS database has registered over 30 cases of pressures, verbal threats, and physical attacks against journalists". In addition, it has become customary for the government and part of the media to constantly refer to independent journalists as traitors, enemies preparing a coup, or agents of foreign powers seeking to overthrow the government.

Journalists under attack in Serbia

NUNS has been collecting data on attacks against journalists since 2008. For datasets browse our Resource Centre on media freedom.

When asked by a journalist of the weekly NIN "if the thugs who used the force against journalists are members of the SNS party, its security body, or the police", Vučić replied that all one can find in the weekly is "no arguments, but just hate". Then, the president proceeded to accuse NIN of supporting the provocateurs that were going for a massacre, musing that the provocateurs were the ones having their own quasi-police, and finally showing his benevolence by saying that "he would not take NIN to court despite the many false statements and news it publishes".

When the rare questions of those journalists who dare venture out of the protocol receive such answers, it becomes all too clear that president Vučić does not want to comment on inconvenient issues and that the verdict is announced well before the end of the investigation – a message that will not fail to reach the prosecutor's ears as well.

Journalists under attack in Serbia

NUNS has been collecting data on attacks against journalists since 2008. For datasets browse our Resource Centre on media freedom.