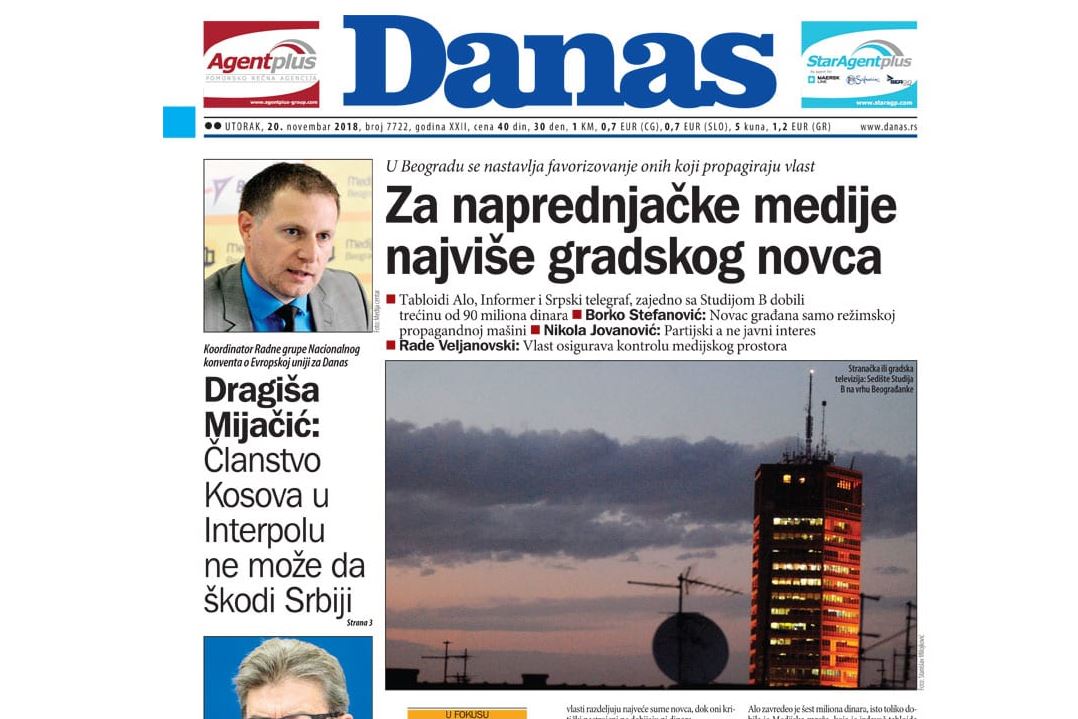 The media situation in Serbia continues to deteriorate. Recent events show that government repression of few remaining non-aligned media has become routine. According to RWB, Serbia has the worst media situation in all the Balkans

Speaking of media freedom in the Balkans, Pauline Adès-Mével, the head of EU-Balkans desk at Reporters Without Borders, said that “the situation in Serbia is worse than in other countries in the region”. In fact, according to the latest World Press Freedom Index , released by Reporters Without Borders in April 2018, Serbia slipped 10 places compared to the previous year’s listing to rank 76th out of the 180 countries.

Judging by some of the things that happened over the last month, in Serbia freedom of expression and media professionalism are “in freefall”, so the future reports published by international organisations will probably show further decline in media freedom in the country.

The few remaining independent media are struggling to survive, being constantly exposed to pressures from the political establishment which is using the news outlets under its control – among which there are many tv stations holding a national broadcasting license – to discredit all dissident voices.

“Caricatures of our lives”

The controversy over caricatures of one of the most important Serbian caricature artists Predrag Koraksić Corax – appeared on the front page of the Belgrade daily Danas – still hasn’t quite down. Polemic broke out when, during the parliamentary sitting, Aleksandar Martinović, parliamentary leader of the ruling Serbian Progressive Party (SNS), accused the daily Danas of conducting “a smear campaign against the SNS and innocent people” that, according to his words , “hasn’t been seen since the time of Hitler and Goebbels”. The deputy leader of the SNS parliamentary group Vladimir Orlić also attacked journalists of the daily Danas, calling them “a disgrace to Serbian journalism”. 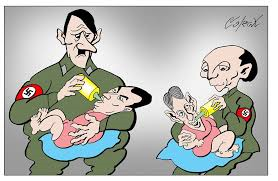 Corax replied with another caricature, depicting Hitler and Goebbels holding Orlić and Martinović and bottle feeding them. By publishing this caricature, the daily Danas responded to numerous attacks from the political leadership that reacts to every critical text published by this daily and few other media that are not under control of the ruling party.

The Ministry of Culture and Information strongly condemned Corax’s drawing, claiming that with it the parliamentarians Martinović and Orlović, as well as Serbian president Aleksandar Vučić, have been linked, directly or indirectly, to unacceptable and morally inadmissible context”.

However, president Vučić doesn’t appear in any of the controversial caricatures, so “the reading” of their content by the Ministry of Culture was received with derision by one part of Serbian public opinion, which commented that the Ministry doesn’t distinguish anymore Hitler from Vučić.

The next day, an exhibition of caricatures by Corax and Dušan Petričić, entitled “Caricatures of our lives”, hosted in the city library of Lazarevac, near Belgrade, was censored. The exhibition was opened on 9th November, as a part of the celebrations of the International Day Against Fascism and Antisemitism, but the following day the images were removed. The explanation given by library director is that the exhibition was politicized, since some members of the opposition were among the participants in panel discussion organised on the occasion of the exhibition opening.

“The dogs have been unleashed”

The Ministry of Culture and Information, that strongly condemned the daily Danas and Corax’s cartoons, didn’t react at all to a recent edition of the weekly Ilustrovana politika carrying the front-page headline: “The dogs have been unleashed”, accompanied by a photograph of a dog with gaping jaws, against the background covered with representations of front pages of some independent Serbian newspaper, including the weeklies Vreme and NIN, and the daily Danas. In a six-page article, published in the same edition of Ilustrovana politika, the above-mentioned independent newspapers were accused of acting against Serbia. 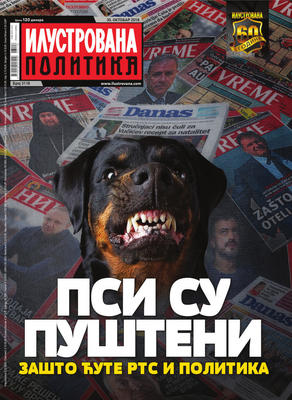 The journalists’ associations also pointed out that Đorđe Martić, author of the controversial article, was the editor-in-chief of a newspaper that in 1999, during the NATO bombing of Yugoslavia, published an explicit call for lynching of journalist Slavko Ćuruvija who was killed five day later in the center of Belgrade.

As stated in a join press release by NUNS and NDNV, “another frightening thing is that the political leadership – in a similar manner as in the late 1990s, when Vučić was minister of Information – doesn’t limit itself to an article, but continues to discuss about it on television, with a clear intention to encourage the dissemination of this scandalous invitation to lynching”.

The polemics calmed down only after, Suzana Vasiljević, Vučić’s head of public relations, resigned – under the pressure of public opinion – from the membership in the Supervisory Board of “Politika ltd”, publisher of Ilustrovana politika, and after president Vučić publicly condemned controversial front page.

No representative of the political power condemned, or tried to substantiate the claims made by Marko Parezanović, member of Serbian intelligence (BIA), during a panel discussion in which he participated sitting alongside Serbian prime minister Ana Brnabić. Parezanović said that the biggest threat to Serbia is “hidden action of a foreign factor that mostly uses mechanisms of its special services”, and that some members of the opposition and some media are acting in its interest.

Fake livestream from Paris and real war criminal from Hague

Another image, this time broadcast on the Radio Television of Serbia (RTS), highlighted the lack of professionalism and indulgence in progovernment media. During a live broadcast of speech by French president Emmanuel Macron on the occasion of the centenary of the First World War Armistice, RTS inserted, three times, a freeze frame depicting president Vučić among the public. Although this kind of intervention is quite unusual in live streaming, RTS said that “editor in charge made an error of judgment”.

However, one has the impression that RTS tried to emphasize the importance of Vučić’s presence at the event. During the commemoration ceremony in Paris, Vučić was in a certain sense marginalised, or rather he didn’t get a seat he expected alongside most honored guests, among whom were also some Balkan leaders, including president of Kosovo Hashim Thaçi and president of Croatia Kolinda Grabar Kitarović.

On the other hand, there was no intervention regarding a television show in which participated, by phone, Ratko Mladić, commander of the Army of Republika Srpska, sentenced to life imprisonment by Hague Tribunal for various crimes, including the Srebrenica genocide.

During the show, Darko Mladić called his father and put him on speakerphone, and Ratko Mladić was chatting with guests in the studio without being interrupted by questions.

One would expect from the Electronic Media regulatory Authority (REM) to warn, or sanction TV Hepi, for promoting a war criminal. However, in Serbia those things not only don’t get sanctioned but are considered acceptable.

According to Olivera Zekić , member of the Council of REM, “the phone calls are not regulated by law, and those with ethical concerns should go to church”. When asked if it is appropriate for a national tv station to promote war criminals, Zekić responded with a counter-question: “have you ever heard about the battle for the market and for the audience?”.