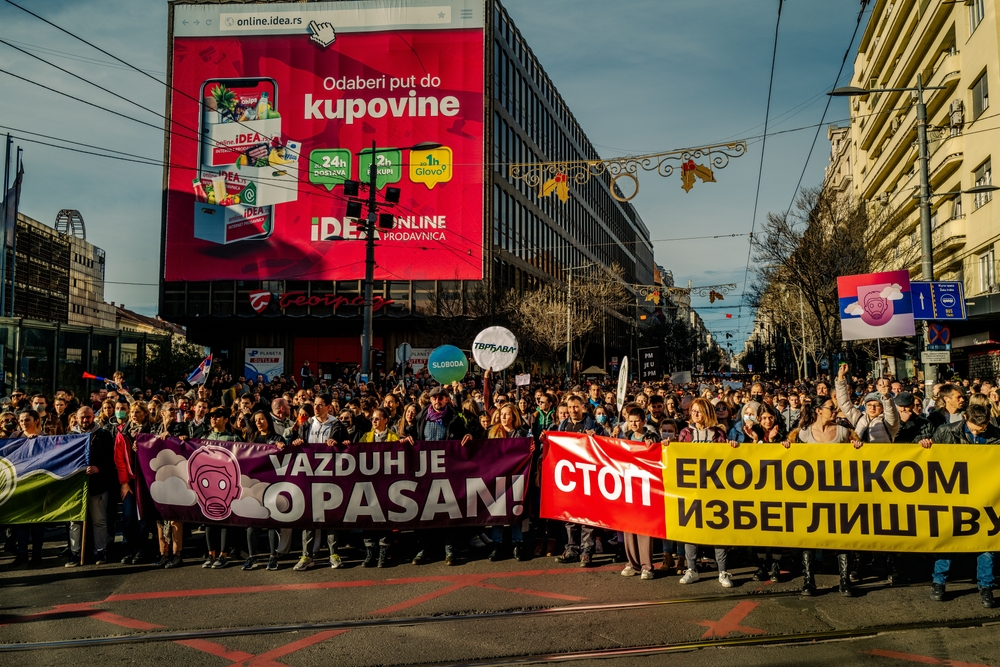 In Serbia, the environmental issue is becoming an increasingly important social and political matter. Protests against some controversial laws are bringing numerous citizens and environmental associations to demonstrate in various cities

Judging by recent events, the environmental issue in Serbia is becoming a central theme of the political debate which is becoming increasingly heated as the elections scheduled for next spring approach.

The recent approval by the Belgrade parliament of the new law on the referendum and some amendments to the law on the expropriation of private property have caused massive protests and other acts of civil disobedience (such as the blocking of the main roads of the country) which took place last weekend in several cities of Serbia.

The legislative changes in question – which some experts and activists consider unconstitutional – are directly linked to the Rio Tinto company's plan to open a lithium mine in western Serbia.

Several environmental associations, most of the opposition forces and many Serbian citizens believe that behind the introduction of the new provisions lies the intention of the leadership in power to facilitate the implementation of the Rio Tinto company project, strongly contested by citizens and activists.

Some non-governmental organisations, including “Ekoloski ustanak” [Ecological Revolt], have called on President Aleksandar Vucic not to enact the laws in question as “badly written and unconstitutional ”. "We ask you to do everything possible to prevent the country from sinking into unrest and an even more serious crisis", reads a press release by the organisation.

It remains to be understood how Vucic will move on this issue, but it is certain that Serbia is experiencing a period of great instability. Last Saturday in all the cities where protests and roadblocks were organised the atmosphere was very tense and numerous clashes took place in Belgrade, Novi Sad and in particular in Sabac where some hooligan groups close to the ruling elite clashed with the demonstrators.

The riots in Sabac began when Nebojsa Stojicevic Jarin – who, according to some media reports, is a member of the Serbian Progressive Party (SNS) – tried to force a roadblock aboard a bulldozer , then physically collided with Dragan Milovanovic, one of the citizens gathered on the spot.

Jarin got the worst of it in the ensuing brawl, however the bulldozer was stopped. What aroused public disconcert was the fact that during the brawl some young people, armed with bars and hammers, sided with Jarin. However, it was possible to avoid a larger clash and those young people soon disappeared aboard some cars all of the same type which, according to some media reports, are owned by the municipality of Sabac. Dragan Milovanovic was placed in custody  for 48 hours, then released.

A tense atmosphere still reigns in the city of Sabac. Many citizens and opposition figures took to the streets to protest the violence that occurred during last Saturday’s demonstration, while SNS members organised a counter-demonstration. It remains to be seen how the situation will evolve and how the ruling elite will react if citizen protests continue.

In Belgrade, where the largest demonstration took place, there was no serious unrest despite the high alert because an SNS congress was also held in the capital on the same day. However, an episode of excessive use of force occurred when Aleksandar Krstic, commander of the local police force of one of the Belgrade municipalities, brutally pushed  a girl who was protesting to the side of the road and then threw her over a fence.

The blockade of the main roads of the country lasted an hour, as originally planned, but Savo Manojlovic, representative of the movement “Kreni promeni ” [Start the change] which, together with other associations, organised the demonstration last Saturday, announced that the protests will continue.

"The protests will cease only in the event that the President of the Republic Aleksandar Vucic decides not to sign the unconstitutional law on expropriation and the amendments made to the law on the referendum and popular initiative", reads a press release by the movement "Kreni promeni". Manojlovic invited  citizens to gather next Saturday, 4 December, to block the main motorways and suburban roads should the president promulgate the above mentioned laws.

The reaction of power

Environmental protests are frowned upon by the ruling leadership.

Prime Minister Ana Brnabic defined the demonstrations held last weekend as fascist and anti-democratic, criticising the fact that some have defined the reaction of citizens who opposed the demonstrators who "prevented everyone from moving" as violent.

“What a logical fallacy – a protest against violence towards those who prevented everyone from moving?!? You block traffic, people rebel, and then you protest because people have rebelled? Maybe we should let you decide if, when and in which direction we can move, while everyone else has to shut up, because you are supermen, übermensch?”, she tweeted.

President Vucic stated that the demonstrators who blocked motorways in Serbia on 27 November "violated the Constitution and freedom of movement", adding however that only “a handful of people ” participated in the protests.

Vucic's reaction suggests that the ruling leadership is still considering how to move on the issue of controversial laws. And it is a completely understandable attitude because this time the government is not facing the opposition forces – towards which it continues to apply a tried and tested tactic, a combination of smear campaigns and actions aimed at weakening the opposition – but the citizens and environmental organisations that have made concrete demands, also showing themselves ready to take radical actions, such as roadblocks, which are a new element compared to the protests organised in the past.

Given these premises, it is clear that the government will soon have to take important decisions that will undoubtedly affect the progress of the environmental revolt. Vucic does not like being forced to bow, at least not publicly, to ultimatums, no matter which side they come from – and in the last nine years, since coming to power, he has done so very few times – but right now this scenario cannot be ruled out.

According to Radomir Lazovic, representative of the movement “Ne davimo Beograd” [Let's not sink Belgrade], Vucic will not sign the controversial laws because citizens have expressed strong resistance and legitimate discontent.

“We have already seen situations where this criminal regime has backtracked [on some issues] on the eve of the elections, but without a change of power there is no expectation of a real breakthrough. All those harmful projects and laws will not disappear after the elections”, declared   Lazovic.

Sociologist Jovo Bakic, on the other hand, believes that Vucic will try to prevent new protests by deploying not only the police officers but also the gendarmerie. “It cannot be ruled out that hooligans may again show up at the protests. We'll see if [Vucic] decides to employ them again or not. What makes me happy is the fact that civil society is awake”, said  Bakic.

Therefore, eventful days await us thanks to the environmental issue which – although few expected it – is becoming an increasingly important social and political issue.