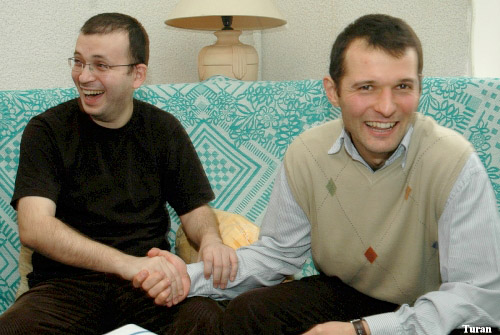 Emin and Adnan were arrested in July 2009. Their detention and later arrest was harshly criticized by local and international organizations. Documents published by Wikileaks suggest that US leadership asked that the two bloggers be “quietly released”﻿

The tiny apartment in downtown Baku was full of people that evening. It had been a long time since so much laughter and joy had been heard in that apartment. But that night, there was a reason to celebrate. Emin (Milli) Abdullayev and Adnan Hajizade were finally free again.

Emin Milli, 32, co-founder of the AN Network and Adnan Hajizade, 27, co- founder of another youth network, OL! (To Be), were convicted on charges of “hooliganism” and “infliction of intentional physical violence” and sentenced to two years and six months and two years respectively on November 11th 2009. The two had been arrested four months prior, (July 2009), for allegedly starting a brawl in a restaurant in Baku. Their detention and later arrest was harshly criticized by local and international organizations. For independent human rights observers at home and abroad, this was yet another example of Azerbaijani authorities cracking down on freedom of expression in this country.

It was breaking news when, on 18 November 2010, Adnan Hajizade was released on probation, based on the ruling at the Baku Court of Appeals, after having served over half (17 months) of his two-year sentence. While neither he nor Emin should have been arrested in the first place, the news of his release was celebrated as wonderful news, especially with the country recovering from yet another undemocratic parliamentary election that was held on November 7th.

“This was completely unexpected for me […] I couldn’t believe when I heard [the ruling decision] at the court. In these last 17 months, I had 12 hearings […] none of which made just rulings […] that is why, when I heard the ruling, it made me happy. I even thought that perhaps they were making a mistake […]” these were Adnan’s initial comments in an interview given five hours after his release.

A day later, on 19 November, friends and supporters were given yet more good news: Emin Milli was ordered to be released by the Salyan District Court on similar grounds. Now free, the two activists will have to report monthly to certain officials on their location and etc.

Both claim that their releases are fully justified given their innocence. “I didn’t commit any crime and freedom is my right. I want justice”, said Adnan in an interview outside the court on the day of his release. Emin also made a public comment. “[Our sentence] was an unjust decision and, to this day, I have trouble understanding the logic behind this. It was simply unjust,” Emin said in a video reportage  from his home.

In spite of everything, both activists hope to continue their pacifist, awareness-raising work arranging seminars and lectures, educating youth, and expressing their opinions. “Life continues. After this [imprisonment] our work will continue, our paths will continue to move forward. And I believe that only time can show what is going to happen in reality” said Emin in his interview  with the Radio Free Europe Liberty local service on the day of his release. Similarly, Adnan too says he will continue his activities. “I am the same Adnan and I haven’t changed. I have always respected people’s honor and their dignity just as I have always respected written and unwritten rules”.

Perhaps more than their friends, it was Emin and Adnan’s parents who felt the thrill of it all. Having lost her husband just few months ago, Emin’s mother Natella couldn’t believe the news. In a video  placed on the website of the Radio Free Europe Radio Liberty local service, Emin’s mother couldn’t hide her joy. Adnan’s parents were also overjoyed. “Long live democracy, down with dictatorship! Long live the Republic! Freedom to jornalists! I am happy. I feel like our 'nightmare', our 'tragedy' is over, but I have no idea what will happen next […] It was hard on our family, my wife was shattered” were Adnan’s father, Hikmet Hajizade's words when he spoke with journalists at their house where they, together with Adnan’s friends, were celebrating Adnan’s release.

Something to look forward

While the release of Emin and Adnan is a positive development, the country’s authoritarian rule remains strong, as does its tight control over freedom of expression. Currently, another journalist and editor-in-chief of a local newspaper, Eynulla Fatullayev, remains in prison, despite European Human Rights Court ruling on his release. Similarly, Emin and Adnan are waiting for the EHRC’s decision. “We are done with courts here, now we are waiting for the European Court’s decision,” said Emin Milli in another interview . “It is each man’s dream to prove his/her innocence and tell the whole world about it.”

It is yet to be seen whether Eynulla Fatullayev will be released earlier than his official ‘release date’ and doubts remain about the sincerity of the Azerbaijani authorities in the recent release of the young activists, especially because it was mostly the result of strong international pressure pushing for their release. Besides public statements of concern regarding the arrest of the two bloggers expressed by foreign diplomats and even the European Parliament, the cables recently published by Wikileaks showed how US diplomats explicitly suggested the Azerbaijani leadership to "quietly release" Emin and Adnan on humanitarian grounds. According to the leaked files, denounced as false by officials in Baku, president Aliyev implicitly "confessed" his involvement in the case, allegedly saying that he "had no intention of hurting anyone", and that the two detainees could be released. Whether or not things occurred as described in the Wikileaks files, one thing is clear: there is still much to be done in Azerbaijan before it will be possible to say that real freedom of expression has been achieved.