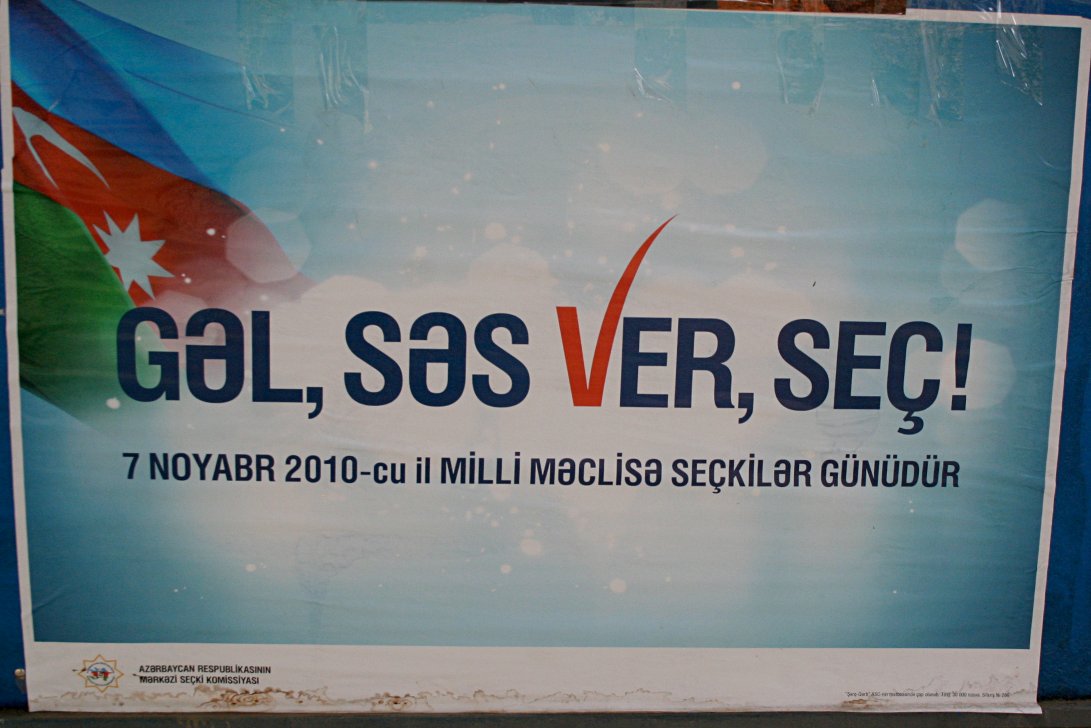 "Come, vote, elect: November 7 2010 is the day of parliamentary elections" (Photo: A. Geybullayeva)

On 7 November Azerbaijan will hold its parliamentary elections, but international observers with the OSCE election observation mission have expressed concerns about a number of issues. Nonetheless, amid a low-key electoral campaign, there are opposition candidates among the choices

With just a few days left ahead of parliamentary elections in Azerbaijan, the population doesn't seem to be informed enough about the vote. It seems like voting is not their number one priority, especially as prices for basic foodstuffs rise while salaries remain low. Widespread apathy among voters is another reason for low interest, with the eventual expected result of low voter turnout (out of a population of 8.6 million, approximately 4.8 million voters are registered).

Independent and opposition candidates are wrapping up their final efforts to reach out to the general public, but have ended up becoming victims of government scrutiny, intimidation, and verbal and psychological pressure to withdraw their candidacies.

Recent changes to visa regulations - changes that some suggest might be election-related, making it more complicated for journalists and international observers to enter the country - just add to the general disenchantment with the democratic nature of the elections.

These are Azerbaijan's fourth parliamentary elections since the demise of the Soviet Union and claims from local authorities that they will comply fully with democratic principles have attracted international attention. The country will vote for new members of the 125-seat parliament for its next five-year term under a majoritarian election system with only one round of voting. 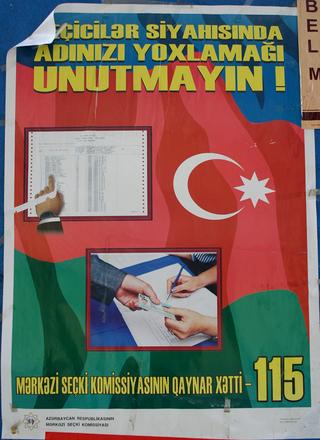 "Don't forget to check your names on the voter list. For more information call 115, the telephone hot-line for the central election commission." (Photo: A. Geybullayeva)

In total, 691 candidates out of a total of 1,115 applicants were registered by the Constituency Election Commissions to run in the parliamentary elections to be held on 7 November. The initial number of registered contenders was higher (704), however, due to some withdrawals and de-registrations, the original number dropped.

Not surprisingly, the highest number of candidates comes from the ruling government party, YAP (Yeni Azerbaijan Partiyasi/ New Azerbaijan Party), which has 111 contenders running for parliament. The party has been in power for the last fifteen years. Consequently, its presence in the national parliament is also the largest (63 seats out of 125) with significant support from other “independent” members (45 seats).

The rest of the candidates are from various political parties or are self-nominated contenders. The party with second highest number of candidates is APFP-Musavat (Azerbaijan Popular Front - Musavat party), a two-party bloc with 33 candidates, followed in the lead by other parties.

There are a number of different observer groups. While some represent international organizations, some are from local civil society groups. The largest observer group is a local NGO, the Election Monitoring and Democracy Studies Center (successor to the Election Monitoring Center). In addition, there are seven other NGOs united under the umbrella of the “Parliament 2010” election monitoring coalition.

Despite adopting the Law on Freedom of Assembly in 2008, Azerbaijan is yet to see its full implementation. Any attempt to hold a rally in any central location in the capital is a struggle, with the outcome usually benefiting the local Baku executive authorities and frustrating the non pro-government candidates. According to the most recent OSCE/ODIHR report , “an APFP- Musavat rally announced for 17 October in Baku was not authorized by the city’s executive authorities.” As a result, the parties canceled the rally altogether fearing that their supporters might “face possible violence or detention by the police” or that “participation of the bloc’s candidates at an unauthorized rally could be used as grounds to de-register them”.

The existing Election Code was hastily amended in June 2010 and yet fails to meet international criteria when it comes to “composition of election commissions, provisions on the resolution of electoral disputes, and rules for recount and for the invalidation of results ”.

The composition of the Central Election Commission in particular is worth noting. While it is one of the main structures administering elections, its current structure is dominated by pro-government representatives. Recommendations from the Venice Commission and OSCE/ODIHR to adjust this composition have been left unaddressed. 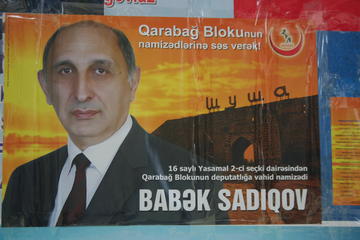 Electoral poster of one of the candidates of the "Karabakh" bloc (photo: A. Geybullayeva)

Some of the candidates have been subjected to pressure and intimidation. Elnur Majidli, a candidate running for office in the Berde district, had his signature leaflets stolen by his own relative. Later on, some of the signatures he collected for his registration were annulled because, as he explained later, the voters were pressured to recall their signatures by the local executive authorities.

Local media coverage remains questionable as a majority of television channels are de facto affiliated with the ruling government. As a result, the general public ends up watching government campaign coverage with little or no focus on opposition candidates and their views. Only one channel airs debates with all candidates.

While the print media remains more diverse, some of its journalists have been victims of blackmail. A week ago, on 25 October, Lider TV  (a local TV channel station known for its pro-government rhetoric) during the regular evening news broadcast aired a four-and-a-half-minute video of an editor from the opposition ‘Azadliq’ newspaper having sexual intercourse with a woman. Currently, Azer Ahmedov is in Turkey and has resigned from his post at the newspaper.

Last but not least, recent changes in visa regulations suggest another setback, even though authorities say these changes are positive and in line with international migration laws. Previously, it was possible to get an entry visa upon arrival at the Haydar Aliyev International Terminal but by mid October, this was no longer the case.

According to Fuad Alasgarov, head of the Azerbaijani Presidential Administration Department for Coordination of Law Enforcement Agencies, recent changes are simply steps towards regulating migration. “[…] recent changes in the visa procedure are not directed against persons arriving from Europe and, generally speaking, they are not directed against anyone. They are aimed at ensuring the national interests of Azerbaijan” explained Fuad Alasgarov in an interview  with Today.az, adding that “[…] agreements on a visa-free regime between Azerbaijan and other countries are based on the principle of reciprocity.”

Fual Alasgarov also dismissed accusations that new visa regulations would negatively affect observer missions and the ability of foreign media outlets to cover the elections internationally. “[…] I would like to note that the changes to the migration legislation were published on 14 September, nearly two months before the elections. Therefore, everyone had enough time to get a visa at the embassies of Azerbaijan”. However, as it turned out, not everyone was aware.

As the country closes in at the end of the final week before country-wide parliamentary elections, there is little hope that the elections will conform with international democratic standards. It is likely that voter turnout will be low and that no major shift in parliamentary power will take place. Whether more independent and non-YAP members get elected will also depend on how transparently the overall election proceeds are and how far the authorities will go to hold on to their current positions and influence.