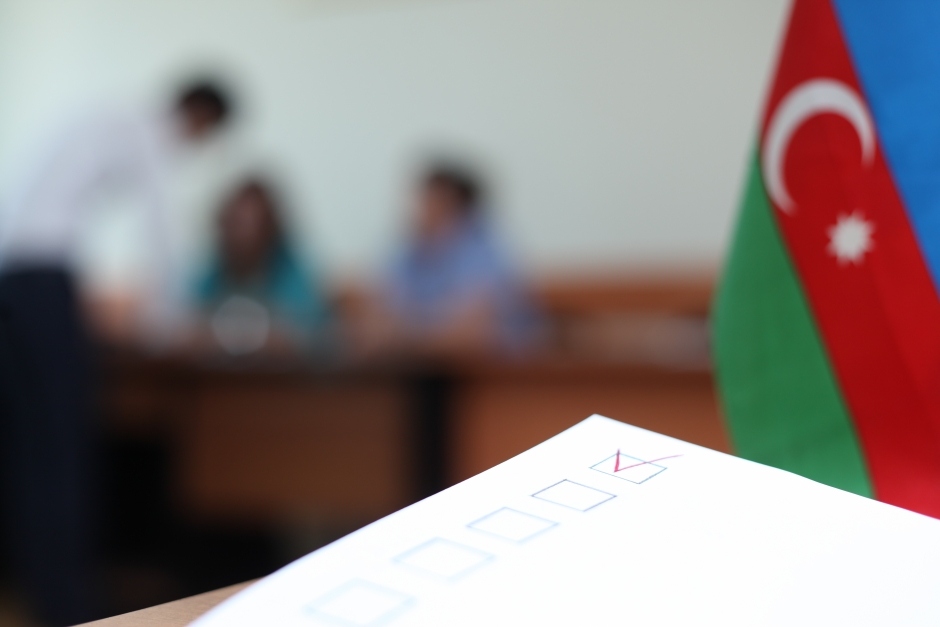 With the lack of interest and competition, disbelief, and long tradition of manipulated election results it is unlikely November 1st elections in Azerbaijan will bring much change. More likely, they will only reconfirm the projections of results for these elections - one party rule on both presidential and parliamentary levels.

In a country where every election since 1993 was marked by fraud and lack of transparency another election is on its way. On November 1, Azerbaijanis will head to the polls to cast their votes and elect a new parliament. But do their votes really matter? Or is Azerbaijan becoming one of those countries where elections are nothing more but a show? The answers to these and many other questions on Azerbaijan’s poor record of ensuring free and fair elections aren’t difficult to find. The experience of the previous elections, both at parliamentary and presidential level, speaks for itself - election results are already determined and the 126 seats already allocated, with only a few exceptions.

Previous elections at a glance

The European Court of Human Rights found Azerbaijan in breach of the right to free elections in the two previous parliamentary elections of 2005 and 2010. Ranging from irregularities in electoral process, arbitrary invalidation of election results, to ballot stuffing, carousel voting and so on, all of these are most commonly seen practices during elections in this small Caucasus country.

Looking at the monitoring reports by the Organization for Security and Cooperation in Europe (OSCE), little progress was made since 1995 parliamentary elections despite the numerous and repetitive recommendations and calls to abide by the OSCE election-monitoring commitments.

“Newspapers of all political parties, the independent press and other media have been subject to political censorship, which the authorities conceded in private conversations […] Opposition parties and candidates claimed that the elections were taking place in an atmosphere of fear and intimidation”, said the OSCE report following the parliamentary elections in 1995.

In the next parliamentary elections in 2001, OSCE reported ballot stuffing, manipulated turnout results and pre-marked ballots with party proxies facing frequent intimidation, harassment and even arrest.

In 2005, calls for electoral reform and transparency had little impact on the next elections of 2010, “A deficient candidate registration process, a restrictive political environment, unbalanced and biased media coverage, disparity in access to resources to mount an effective campaign, misuse of administrative resources as well as interference by local authorities in favor of candidates from the ruling party created an uneven playing field for candidates”.

As a result, the long tradition of violations, atmosphere of intimidation and unequal campaign time ahead of the election, leaves little hope days before the November 1 votes for any positive outcomes and improvements.

Officials however disagree with any critical reporting of Azerbaijan’s elections past or current political freedoms environment. On October 2, presidential aide, Ali Hasanov said, “Elections held so far in Azerbaijan, have been democratic and fair”.

But while Hasanov can say all he wants about free and fair elections, the sentiments among candidates tell a different story.

In the past several weeks, out of the 1200 something candidates officially registered as candidates by the Central Election Commission, some 500 withdrew from the race. Among them are the independent, the opposition party Musavat members and candidates from the N!DA civic movement.

In their statement N!DA candidates said, “Our goal in running for the elections, wasn’t winning a seat in the parliament. Instead we tried to use the 21 day campaign time to get in touch with the people, strengthen our relationship with them, and to introduce N!DA to them. We tried to hear people’s problems and call upon them to fight for the changes in the upcoming elections.”

But after realizing November 1st elections won’t be free nor fair, the movement decided to pull out two of its candidates from the race while its volunteers will be monitoring the day of the elections as independent observers.

The opposition party Musavat announced its decision to withdraw from the race on October 28, just 3 days before the Election Day. Drawing attention to the country’s long list of political prisoners, lack of electoral reforms, the on-going pressure and intimidation against candidates and unequal campaign opportunities, the party called on the authorities to postpone the elections all together.

Mirali Huseynov, an expert on elections in Azerbaijan says such mass withdrawal is not surprising given the lack of trust in current political processes, the fair electoral procedures and election regulations. “Many of the candidates realize that the existing political and legal environment limits their opportunities to promote their political messages and work with their electorate. There is also lack of trust in having free and fair elections. After re-evaluating their situation candidates understand that they won’t be elected and they choose not to spend any further resources on these elections.”

In Azerbaijan, there are no local experts from election monitoring organization left to comment on the pre-election environment. One of the well-known institutions that did monitoring before and after the elections was the Center for Election Monitoring headed by Anar Mammadli. But Mammadli was arrested in 2013 shortly after the presidential elections and the CEM’s critical reporting of observed violations in the run up and during the Election Day. He was sentenced to five and a half years in May 2014.

The OSCE pulled out its mission

The OSCE Office for Democratic Institutions and Human Rights (ODIHR), which sends short-term and long-term observers during every election, also pulled out its mission due to restrictions imposed by the authorities.

Other local organizations engaged in monitoring are staying on the sidelines. The Public Association for Democracy Learning says there are no conditions to carry out objective monitoring of the election process. “There is no funding, no team, and no excitement”, said the head of the association Mirali Huseynov in a recent interview with AzadliqRadiosu, Radio Free Europe/Radio Liberty Azerbaijan service when commenting on the elections. In his bleak overview Huseynov also said there was no public interest in these elections.

With the lack of interest and competition, disbelief, and long tradition of manipulated election results it is unlikely November 1st elections in Azerbaijan will bring much change. More likely, they will only reconfirm the projections of results for these elections - one party rule on both presidential and parliamentary levels.