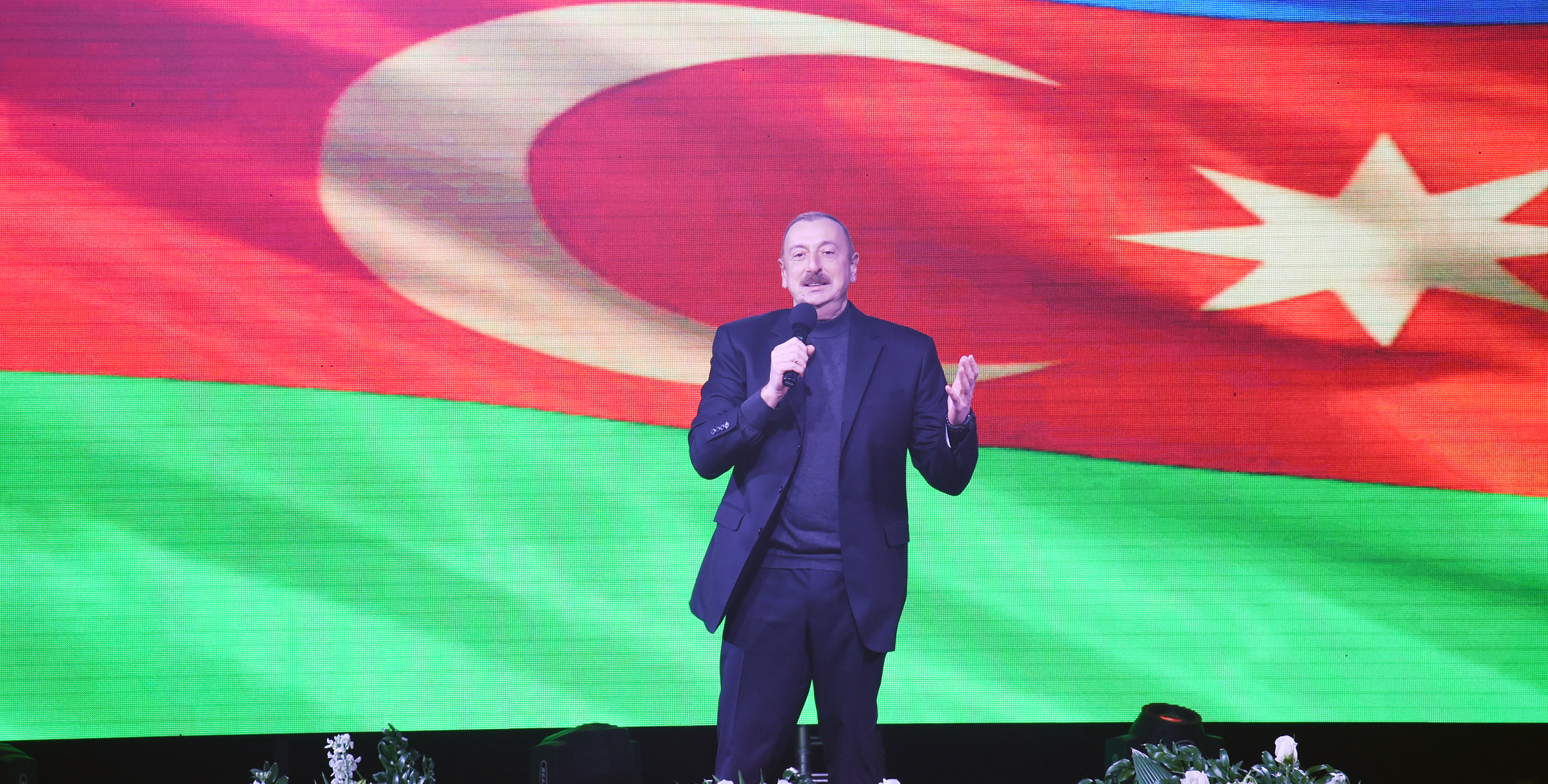 Nothing but a show, with dramatic results for the future of Azerbaijan. A commentary on the recent presidential elections

Standing outside a crowd gathered in front of the Haydar Aliyev Culture Center, dressed in casual clothes rather than in his usual suit and tie, President Ilham Aliyev held his fist high as he delivered yet another victory speech. “I have always felt the support of the Azerbaijani nation”, said the President. “I have always relied on this support [...] The Azerbaijani nation made its choice in this election. The people once again voted for our policy, stability, development and progress”.

Having secured an 86% majority of the vote, there is nothing that stands between President Ilham Aliyev and his next presidential term, which based on the changes made to the state constitution in 2016 through a country wide referendum, extended his leadership from five to seven years.

But was it really the case that the nation made its “choice”, choosing “stability” and “development”? Were other candidates not promising stability? Or progress? The truth of the matter is, it did not matter what their election campaigns promised. While the real opposition boycotted the early election that were originally scheduled to take place in October, the seven candidates that took part in the race were merely the cast and characters of the new season of “The Kingdom of Aliyev”.

Aside from the leading role starring the 56-year-old Ilham Aliyev as the new President, the rest of the crew was a mix of old and new. Gudrat Hasanguliyev, Faraj Guliyev, Zahid Oruc, Araz Alizada, Hafiz Hajiyev, Sardar Jalaloglu kept their roles while Razi Nurullayev was a new cast member to the show. What we have, here, is an exceptional skilful cast of characters, returned for season four with outstanding performances especially during the televised presidential debates. Although, according to the script, the candidates ought to use the allocated time of seven something minutes to talk about their campaign, some used this time to shower the current president and other government structures with nothing but praise. A few even went off the script, calling on the people to vote for the President Ilham Aliyev, in case they were not voting for them.

But it was the election day that really brought forward the role of extras, starring as members of the Central Election Commission, chairs, secretaries and members of polling stations, participants of carousel voting, ballot stuffing and other personnel without whom, the premiere of the new season would have been impossible.

It is these people, that the President Ilham Aliyev should really thank, for their priceless performance and the role they played in really helping the incumbent to stand on the stage, a day later, in front of the Azerbaijani people, holding his fist high and showering the nation with compliments for their vote, choice, and the decision to stick with the show rather than switching to something new.

The making of and international acclaim

It was thanks to the work of independent observers, fearless journalists and activists who managed getting behind the stage, to capture the best moments of the premiere. Some were kicked out from the filming location, others captured participants of carousel voting at their best, while this footage was nothing short of action films, distorting camera view and getting the job done.

Azerbaijan Presidential Election of 2018 were really a team effort. So when the set and actors received their first critical review by a group of international observers from the OSCE, PACE and ODIHR, naturally emotions kicked in. Angered fans of the show, mostly representatives of local media outlets, started yelling at the observers, accusing them of representing the interests of Armenia and talking about a country other than Azerbaijan. It was an excellent addition to the season’s first episode, leaving the viewers on edge.

It was not only criticism, however. A number of other international guests who starred in the season premiere as guests, showered the experience with praise. Invited from various casting agencies of the world - European Committee of the Regions, European Strategic Intelligence and Security Center, Organisation for Islamic Cooperation and many others - spoke of transparency, openness, and fairness during their time on the show.

Having inherited his lead role in the show from his father, Haydar Aliyev, Ilham Aliyev is no doubt a smart character. Throughout his presidency, his persistence to stay the lead resulted in a number of cast kicked out from the show.

Until 2013 there were some characters from the civil society and independent media, but considering them as a potential challenge, Ilham Aliyev successfully stumped them out - some were forced to leave the country, fearing the faith of others who were sent to jail on false pretext. Many have written of the rampant corruption on the show as well. Although known for her likes for fashion and plastic surgery, Ilham Aliyev brought his wife on the show as well: as of last year, the first lady also stars as the First Vice President of Azerbaijan Republic. Critics of the show have asked the producers what Ms. Aliyeva’s role really is on the show, but so far have failed to find answers.

For now, the show secured a fourth season, which will run for the next seven years. It is unlikely we should expect any sudden twists to the plot. So, welcome to the new season of “Kingdom of Aliyev” show.