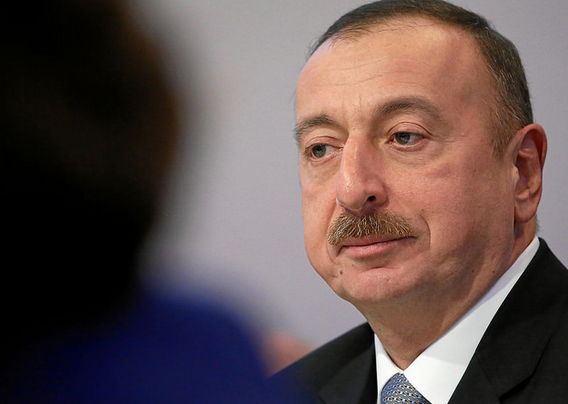 While other presidents are fighting terrorists, dealing with refugee crisis and working towards building well functioning economies, Azerbaijani president Ilham Aliyev is fighting his own enemies. His “most wanted” list reveals names of rights defenders, youth and opposition activists, bloggers, journalists, non-governmental organizations, and media outlets. The list isn’t extensive, and in fact it just got shorter with a local Court verdict sentencing yet another prominent journalist to a lengthy time in jail, two days ago.

Khadija Ismayilova, a Baku-based investigative journalist, had one fault: being critical of the government authoritarian policies and rampant corruption. For the past five years, Khadija was investigating offshore companies, flourishing businesses and the country’s descending democracy record. As she said it herself in one of her statements, following a blackmail case against her, it was never her intention to find out links to President Aliyev and his family while doing her work. It was just that all the records and research brought her to the endless companies and ventures all linked in one way or another to Ilham Aliyev and his family members.

So the 7-½ year sentence that was handed to her September 1 by the Baku Court for Grave Crimes was not a surprise. From the start of the trial, it was clear that the Court was uninterested in the evidence, in testifying witnesses or in Khadija’s own statements. Everything was dismissed or turned down. None of the defense motions were taken into account. And as Khadija said in her final word , “as witnesses testified, the Prosecutor realized that all the lies were coming out and refused the documents to be examined in Court”.

But Khadija’s case and her theatre trial aren’t the first ones. The list of Aliyev’s enemies at home includes recently sentenced Leyla and Arif Yunus, a couple known for their work in the field of reconciliation and political science.

Aliyev also does not like youth activists. His dislike was already visible back in 2009, when he went after two young men who used satire to mock his government. The two were later known as “donkey bloggers”. Both men were released serving a year into their two-year sentence.

In 2014, other youth activists followed suit this time receiving lengthy sentences ranging from six to 8 ½ years. Some were immediately released, after writing letters to the president apologizing for their "acts", others remained months behind bars before being pardoned. Which also indicates President Aliyev’s fear of the country’s alternative minded youth, who are standing against his authoritarian grip despite on-going fear and intimidation.

Others on Aliyev’s “most wanted” enemies list include rights activist Rasul Jafar, human rights defender Intigam Aliyev, the Head of an independent election monitoring organization, Anar Mammadli, the Head of a political movement, Ilgar Mamedov, journalists Seymur Hazi and Parviz Hashimli as well as their colleagues of the Berlin based Meydan TV [its founder is one of the donkey bloggers, Emin Milli].

The list includes award winning men and women, recognized abroad for their courage and work. While President Aliyev himself is walking around free despite breaking a number of Azerbaijani laws, his family members and his close aid continue to engage in illegal ventures despite all the work [by Khadija Ismayilova] proving their criminal behavior. In the meantime, those talking about these crimes end up behind bars, threatened, persecuted, and even killed.

In the past 18 months, Aliyev managed to silence the country’s most prominent voices, some of who might not ever see freedom due to their age and health. In the past 15 years, since Ilham Aliyev came to power after his father, he got rid of all political opposition, ensured undemocratic and fraud elections, changed the constitution and secured presidency for life, changed legislation making it impossible for independent non-governmental organizations to sustain themselves. During his presidency, four journalists were murdered, more went to jail. Corruption reached unprecedented levels and, two days ago, the country saw one of its most well known voices silenced by jail sentence.

Soon there won’t be anything else to shut down, or anyone else to repress. Because soon there won’t be anyone left in Azerbaijan but Aliyev, and his noble aid. As for the people, well, they have been silenced a long time ago when their right to education was taken away from them by the Ministry of Education, making sure it remains this way.