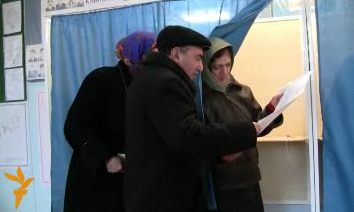 Local elections in Azerbaijan have been accompanied by allegations of fraud. The limited electoral participation can be explained by the local administrations' lack of real power and the lack of authentic democratic competition

“Your vote counts”. So reads one of the posters on a window of a gymnasium by my house. It is around 11 a.m. On 23 December when I leave for work. As I pass by one of the polling stations (where I should be casting my vote), I see little action. There are no exit poll representatives outside of the polling station; there is one police officer standing in the yard with two other men. They look at me with suspicion as I start looking around – no more posters of candidates on the board standing outside of the school gates. I hesitate for a minute, then decide not to vote. It is not going to make a difference anyway.

By the end of the day, I realize I was not the only one to think that way. “It's not going to change anything anyway, then why should I?!” says a taxi driver as I ask him whether he voted today. That evening, I see a number of men and women who share the same view: 'nothing is going to change anyway.'

These are the third municipal elections in the country since 1999 when the Law on Municipal Elections and the Law on the Status of Municipalities were adopted in the National Parliament.

The first elections since independence were held on 12 December, 1999. Since then, close to two thousand municipalities were established in large city districts, with some having branches in rural villages.

In theory, municipalities in Azerbaijan are independent from local state administration offices (excoms) however, in practice, they are not and lack decision-making freedom when it comes to implementation of certain projects and policies. They have small budgets and lack a complete legal framework. Their main income comes from tax collection and land sales.

The number of municipal council members ranges from a group of as small as five members to as many as 19 members. Each member gets elected for a five-year term. Once members are elected, they vote to choose their municipality leader from among themselves.

On 23 December, about 31,000 candidates ran for 15,682 places in 1,718 municipalities (municipality numbers have been reduced over the last year). Though in total there were 18 party representative running in the elections, the majority were affiliated with one ruling party: New Azerbaijan Party (Yeni Azerbaycan Partiyasi).

The election day was declared a holiday to ensure maximum turnout. Despite this, according to official results, the turnout reached only 31.86 percent.

As has been the case in previous elections held in the country regardless of whether they were parliamentary or presidential, the election did not proceed without irregularities. A video published on the website of Radio Azadliq (http://www.azadliq.org/video/4801.html) shows how four women voted twice at two polling stations in two different districts. “Show us who we need to vote for”, said one of the women, addressing commission member at the polling station as she was given the paper with all the candidates. In their interview outside of the polling station, the women said they would be visiting several other polling stations to vote. ‘We will go wherever they tell us to go, even if it means we visit one or five stations today”.

Another video (http://www.azadliq.org/video/1912207.html?isArticle=1) shows a group of people carrying a large sack of ballots around 23:00 in the evening and entering a restaurant on a boulevard for unknown reasons.

According to an article published on Radio Liberty, Azadliq Azerbaijan branch, a list of candidates for each municipality had been prepared well in advance and each polling station received strict commands to make sure the listed candidates won the elections.

Head of the Musavat opposition party, Isa Gambar, stated his dissatisfaction with the elections. “These have been the most disgraceful elections in Azerbaijan in all of its years of independence”. The party’s general conclusion about the elections stressed serious law violations, as well as falsifications. The statement underlined the non-existence of democratic conditions or opportunities to carry out equal campaigning in the run-up to the elections. Given such violations, the Party’s central election headquarters viewed these elections as yet another lost opportunity to establish a real, local, self-governing system and as a step back in forming a true democratic society.

The leader of the political party Umid, Iqbal Agazade, said the government used carousel voting operations extensively (voters going from one polling station to another, voting multiple times), just as it had in previous elections. According to Azerbaijan’s Ombudsman, Elmira Suleymanova, “it is possible that these photos have been taken somewhere else”, thus dismissing any illegal voting allegations.

Despite complaints raised by opposition party members and independent observers, the Deputy Chairman and the Executive Secretary of the New Azerbaijan Party, Ali Ahmadov, in a news conference held on the day of the elections, said “municipal elections in Azerbaijan were held in a free, transparent and democratic atmosphere”. In his statement, Ahmadov characterized municipal elections as “a new chapter in the political history - a landmark in democratic development in Azerbaijan”, adding that the “elections were conducted normally”.

The next elections in Azerbaijan will be held in November, 2010 when voters will hit the polls to elect officials for the Azerbaijan National Parliament. Whether there is more faith in those elections than there was on December 23rd is a matter of wait and see. But let us hope that, perhaps next time, Azerbaijan might see a glimpse of free and fair elections.