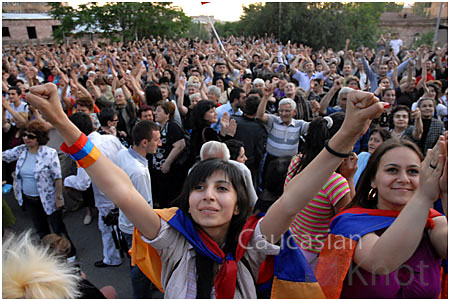 Municipal elections took place in Yerevan on 31 May, "a local election driven by a national agenda". Amidst claims of widespread fraud and intimidation, opposition leader and former president Levon Ter-Petrosyan called for protests

As the first significant election to be held since last year's bitterly disputed and highly controversial presidential vote, the conduct of the poll to determine Yerevan's mayor should have provided the authorities with the sorely-needed opportunity to improve Armenia's democratic credentials in the international arena. However, while a small team of European observers considered the municipal election to be "largely conducted in compliance with European standards," local observers and analysts were not impressed.

Speaking to Osservatorio, Armenian National and International Studies (ACNIS) Director Richard Giragosian is one of many critical of the vote. "It was outrageous and yet another example of the systemic abuse and misuse of administrative resources, the power of incumbency in this country, and yet another lost opportunity for Armenia to actually turn the page after the 1 March fiasco. However, the real hypocrisy comes not from the Armenian government, but from the European observers who once again endorsed a fragrantly abusive election."

Despite such opinions, however, one diplomatic source in Yerevan urges caution when considering the opinion of the observers from the Council of Europe's Congress of Local and Regional Authorities by suggesting that critics wait until the final report is published.

Regardless, the stakes in the election were always going to be high. Although ostensibly a local election, the importance of the vote to determine who controls the economic and political heart of the country had already been heightened by the candidacy of Levon Ter-Petrosyan, Armenia's first president and leader of the main extra-parliamentary opposition Armenian National Congress (ANC). The coalition of over a dozen minor political parties supporting him considered the vote to be a "second-round" of last year's presidential election.

Ter-Petrosyan came in second during that vote to the current president, Serzh Sargsyan, amidst claims of widespread fraud and intimidation. A tense post-election standoff ended only when a state of emergency was declared following bloody clashes between opposition supporters and security forces which left 10 dead. Hundreds of Ter-Petrosyan's closest supporters and allies were detained, some still remain in custody or prison, and a few remain on the run, location unknown.

Considering that, claims from the local affiliate of Transparency International that the municipal vote was the "most illegal, amoral and cynical elections in all the history of Armenia" might be considered somewhat of an exaggeration, but the larger concerns about democratization in the country certainly continue to ring true. From the outset, reports indicated that vote-buying was rampant among an electorate which remains apathetic and unconvinced that it has the ability to determine its own representatives and leaders.

Turnout was only 52 percent, despite probable ballot-box stuffing and reports of bussing in of voters by the ruling governmental Republican Party (RPA). Final results showed that the RPA won with 47.39 percent of the vote, while Ter-Petrosyan's ANC came in a distant third with just 17 percent, leading some in the parliamentary opposition Heritage party to criticize the former president. Two of its MPs, Armen Martirosyan and Zaruhi Postanjyan, said that the ANC's poor showing indicated that it was "not a mature political force yet."

Giragosian agrees, but also says the vote highlighted other shortcomings in Armenia's fledgling democratic system. Rather than focus on local issues of concern, much of Ter-Petrosyan's campaign rhetoric instead centered more on accusing the authorities of "selling-out" national issues during efforts to improve relations with Turkey and reported momentum in negotiations to resolve the long-running conflict with Azerbaijan over the disputed territory of Nagorno Karabakh.

"One of my fundamental criticisms across the board is that we had a local election driven by a national agenda where this wasn't about trash collection, road repairs or local issues of concern to Yerevan's residents," he says. "This is a reflection on the sad state of local politics in Armenia where discourse is already fundamentally limited within certain nationalist parameters. However, this was a miscalculation because it failed and is rooted in the bigger problem of politics driven by personality rather than by policy alternatives."

Moreover, argues Giragosian, while the two main governmental parties could be faulted for resorting to falsification, so too can the extra-parliamentary opposition be for preparing for what it hoped would be huge post-election rallies on the scale of those following last year's presidential vote. Instead, the day after the 31 May election, the opposition only managed to gather just a few thousand, with many of those attending looking depressed and disillusioned. A new strategy was only revealed last Friday at another rally attended by just 4-5,000 people.

Typically, the first three main points from the opposition's 12-point platform focuses on Armenia-Turkey relations and the Nagorno Karabakh conflict, highlighting the fact that political forces on all sides consider such issues as the only way to mobilize support.

But, if falling attendances at opposition rallies and low support at the polls might also represent the gradual demise of the extra-parliamentary opposition, Giragosian argues that last month's mayoral election instead indicates that there could be a new re-drawing of the political landscape, but perhaps in unexpected ways. With clashes reported between the RPA and another ruling party, Prosperous Armenia, the real changes might occur away from the opposition and in the government camp itself.

"The only difference from previous elections is that within the monolith of the ruling coalition we saw new fractures and fissures appearing with members from the two parties literally assaulting and getting into fist fights with each other. The election demonstrated yet again that there is the lack of true political parties in this country and the lack of any grassroots bottom-up driven policy or ideology-driven forces," he says.

"It was strict confirmation that things are still unacceptably bad and we're going in the wrong direction. Armenia is approaching a crossroads where it might become even more authoritarian by following a Belarus model. However, the real determinant here is not politics, but economics. The political stalemate and polarization can sustain the system, and it can be managed, but an economic crisis would be the tipping point. If the government can't handle that, then this will pose more serious challenges."