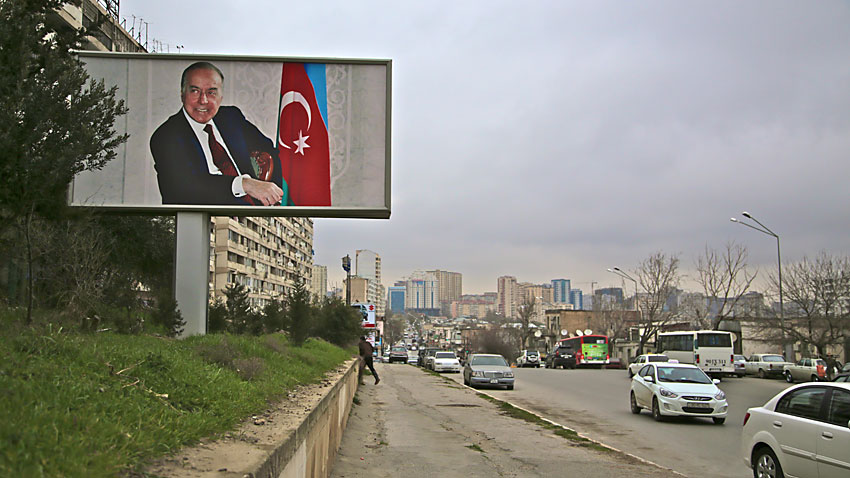 A giant poster of Heydar Aliyev, father of the current President

The Presidential elections in Azerbaijan will take place on October 9th. Nine candidates will challenge the current President, Ilham Aliyev. Polls show a will for change, but few believe it will be possible

In a country set to elect its next president in less than a month, the pre-election atmosphere is surprisingly calm, if not care-free. Most Azerbaijanis go about their business and pay little or no attention to plain election posters decorating many windows of shops, banks, and state institutions. These posters are out-shined by commercial billboards advertising travel to Dubai or elsewhere, a new restaurant or a mall, or the images of the late President Heydar Aliyev casting a smile at the public.

For some, October 9th will be just another ordinary day. Perhaps it is not the people's fault. They have given up on the possibility of having free and fair elections. Or maybe it is their satisfaction with present circumstances that leaves Azerbaijanis certain that the popularity of the current President, Ilham Aliyev, and the unpopularity of the rest of the nine other candidates will no doubt result in yet another victory. A decision about which one of these two will be a winner will be decided through the ballot box in just a few weeks, or will it?

While at home the pre-election atmosphere is rather still, the busy lobby bees are working hard to prevent any damage to the current president's image abroad. A tiny little ad that appeared in the New York Times issue on September 8th, assures its readers of Ilham Aliyev's victory in the upcoming elections. “Azerbaijan: a country facing its future with confidence” reads many grand facts about the country, from the country's GDP which is “expected to double”, to the importance of the energy deals, to the popularity of the current president and a list of achievements all only the result of Ilham Aliyev’s hard labor all these years. The country's human rights abuses, corruption, poor social services, problems with education, and many other pressing issues are certainly omitted. 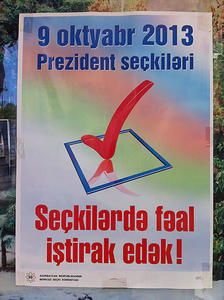 Halfway around the world, back in Baku, in his remarks , the deputy chairman and executive secretary of the ruling New Azerbaijan Party, Ali Ahmadov, also skips the boring human rights issue and gets right to the point: President Aliyev need not engage in any pre-election campaign, says Mr. Ahmadov, adding that Aliyev is the man of the people regularly in touch with his people, standing by the people and for the people. To keep the President at his noble task, a team of devout ruling party members and his country-wide supporters will be running the President’s campaign for him, adds Ahmadov.

It was not surprising then to see a flashmob/promo video prepared by Aliyev enthusiasts dancing away to a song dedicated to the current president. The initiative calls itself “Mənim Prezidentim” (“My President”- not accidentally, the song in the video is also called “My President”). There is a website , a Facebook page with 128 thousand likes (at the time of the writing of this article), and a Twitter handle @MPrezidentim. The initiative’s main aim is to show the results of a successful ten-year political campaign carried out by Ilham Aliyev. The most striking feature of the page is an introductory few lines that roughly translate to:

“I am certain - My President is the protector of independence of this country;

I think - My President compels us to think of our homeland;

I believe - My President will free our lands;

I know - My President thinks of every single citizen (this echoes the words of Ali Ahmadov);

I am sure - My President is the provider of a healthy and successful future;

I consider - My President, young in spirit, is always by young people’s side;

I am proud - My President is Ilham Aliyev”

And yet the President tends to pick and choose which citizens he cares for and which youth he sides with. Not so long ago, eight young members of another youth movement N!DA (English meaning: an exclamation mark) were arrested on trumped up charges, the youngest of whom just turned 18 and the oldest of whom is 28. On September 13th, additional charges were brought against the activists, according to the lawyers working on the case. The eight young men were originally charged with possession of illegal drugs and weapons. The new charges accuse the men of organizing and taking part in mass disorderly conduct.

To date, no songs or video clips were dedicated to any of the other registered candidates (in total, of the original 21 candidates, ten remain) running for the seat in the expected seventh presidential election. In fact, any pre-election political debate is absent. The Central Election Commission (the CEC is the main state body in charge of the elections) announced recently the individual time slots allocated for the candidates: three times a week at 7:00 p.m. on television (six minutes per candidate), and three times a week at 9:00 p.m on the radio (to be decided by the program). Unfortunately, while deciding the times, the CEC might have overlooked one small detail. Hardly anyone watches TV at 7:00 p.m because, at that time, a majority of working Azerbaijanis are stuck in traffic on their way home from work. Similarly, no one listens to the radio at 9:00 p.m when families are most likely to be sitting down together for dinner in the evenings.

The first political televised debate among the candidates and their representatives aired on September 17th. It lacked any structured discussion, and there was no specific debate theme around which the candidates could share their insights. It was a show of statements and accusations.

A local poll conducted by the Adam Sociological Center through its “Democracy and Presidential Elections in Azerbaijan 2013” project asked 1,000 people in six administrative districts 22 questions . The polls revealed that 54.6% of the respondents want to see the leadership in Azerbaijan change. And yet, 49.3% believe this will be difficult as there won't be any democratic elections. Another 33.2% said they won't protest even if the results are falsified as they see no point in protesting (in contrast, 29.9% said they would protest). Back in that New York Times ad, unlike the results of the polls, the authors claims that, according to unspecified polls, the incumbent holds the“vast majority of voters' support".

Approximately five million Azerbaijanis are eligible to cast their votes on October 9th. The ten candidates running for the seat comprise the highest number of candidates of any of the previous ballots. With the ruling party asserting earlier on that there is no credible challenge to the current president, the political atmosphere in the country remains tense, with many analysts arguing that the present situation in the country is insufficient to hold free and fair elections. According to Anar Mammadli, the chairman of the Election Monitoring and Democracy Studies Center (EMDC), “the limits on political freedoms, especially with regard to freedom of speech and freedom to assemble, do not correspond with the international standards to hold free elections”. Mammadli added that there is also a country-wide lack of trust in the election process in general. With this in mind, how anyone can expect a feasible change in a country struck by internal turmoil is yet to be seen.