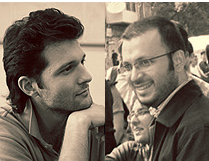 A video clip placed on YouTube on 11 November showed a group of young people in Baku, Azerbaijan standing outside of the Sabayil district court shouting "Azadliq (freedom)" and "Ilham, leave our youth alone!" They were protesting the detainment of two popular activists who had been detained. Then, the camera turned to the entrance of the court where several uniformed police officers, escorting the two detainees, appeared at the door. The men were immediately placed into a police car and taken away.

The two men are Emin Milli, 30, co-founder of the AN Network, and Adnan Hajizada, 26, co-founder of the OL! (To Be) Youth Movement. In the moments before the YouTube clip was filmed, these men had been convicted on charges of 'hooliganism' and 'infliction of intentional physical violence' under article 127 and 221.2 of the Azerbaijani Criminal Code. Adnan was sentenced to two years in prison and Emin to two years and six months.

This was the dramatic culmination of a story that began a little over four months ago when Emin and Adnan were arrested and charged with hooliganism. The prosecution accused Emin and Adnan of starting a brawl in a restaurant in Baku and attacking and causing bodily harm to two young men. But independent observers and international organizations mostly agree that the accusations were fabricated and that Emin and Adnan were being prosecuted for their active participation in youth movements that have harshly criticized the current leadership of Azerbaijan. These men have also organized in support of freedom of the media and human rights and published vocal posts online.

The arrests and the court case

After their initial 48-hour detainment, Emin and Adnan were sentenced to two months of pre-trial detention, followed by a series of trials that began in September. Many of Emin and Adnan's supporters in Baku characterized the trials as "comedy shows".

The alleged victims, Vusal Mammadov and Babek Huseynov, together with their attorney, put on a quite a show. During one of the hearings, Vusal, who was questioned by Isaxan Ashurov, Adnan's attorney, said he couldn't remember much from the night of the incident, not even the gender of the doctor who checked his "wounds". Not surprising, given that neither of the two "victims" ever produced evidence of their injuries apart from a photo of one of them with a blood stain on his shirt. The photo was placed on the internet two weeks after the alleged incident.

During another hearing, Babek confessed that, at the time he wrote his initial statement at the police station, the police officers had told him what to write.

But the best trial moment was yet to come. In response to a question addressed to him by Emin, Vusal publicly denigrated both Emin and Adnan, saying they lacked the strength necessary to beat him up. Earlier, he had also said that he was practicing martial arts.

In an attempt to charge the two with another crime, an investigator added the charge that the two violated Article 127 of the Criminal Code: "inflicting intentional physical violence".

Throughout the legal process, there were several violations of the European Convention on Human Rights, to which Azerbaijan is a member. Emin and Adnan's lawyers raised several appeals and complaints about the following violations: violating the principle that a person is presumed innocent until proved guilty; denying visiting rights and releasing the defendants between the preliminary hearing and the trial; and, when the courtroom was too small to accommodate those in attendance, refusing a request to change courtrooms. The lawyers' appeals were rejected.

The prosecutor played it well too. Despite all the evidence supplied by Emin and Adnan's attorneys, including security camera and mobile phone recordings from the scene, all of it was rejected. This is in violation of article Six of the European Convention on Human Rights. During the hearing on Wednesday, the prosecutor went as far as to denounce the phone recordings from the day of the arrest (which took place on 8 July), submitted by the telephone operating company Azercell. "The streets of Baku are big and you can't tell where they Emin and Adnan were", he said, assessing the recordings.

Officials deny any political meddling in the case and fully support the court's decision. In an interview with Radio Liberty, one prominent parliamentarian who is also Editor-in-Chief of "Azerbaijan", a pro-government newspaper, said he believes it was a "fair decision". "I wasn't at the hearing but I am sure that the process was open and transparent. That is why I respect the court's decision; the judge made a just decision. Azerbaijan's court system is independent".

However, supporters and attorneys of Emin and Adnan do not agree. "This was not a normal legal case. It was political," Elton Guliyev, Emin's lawyer told RFE/RL's Azerbaijani Service outside of the court room on Wednesday. "Starting from now on, we can say that these young people are political prisoners because they were arrested solely on the basis of political motivations." Both lawyers, Elton Guliyev and Isaxan Ashurov, plan to appeal. Erkin Gadirli, a well-known lawyer and friend of the two, said they would go as far as the European Court of Human Rights, if necessary.

This is not the first time representatives of the media have been placed behind bars in Azerbaijan. On many other previous occasions, a number of critical journalists have been detained or arrested. However, what makes Adnan and Emin's case unique is the mass movement that mobilized following the arrest.

Made up mostly of friends and acquaintances of Emin and Adnan, this movement quickly spread the word about the case and built up the number of people involved. They used everything from Facebook to Twitter, You-Tube, Blogs and personal connections with international institutions and media. This network of support that shares the same values as Emin and Adnan is standing strong, even after the court decision.

According to Rashad Shirin, an independent political analyst and a friend of the arrested bloggers, it doesn't look like the movement will stall. In fact, according to Shirin "the authorities have touched a very sensitive nerve of society progressive youth and it will continue growing".

So, given such a large network of people involved, it wasn't a surprise to see that the court's decision resulted in a wave of criticism on online social networks and in the media. Twitter and Facebook were flooded with Tweets and updates on the ruling and messages from users expressing their anger, frustration and annoyance. The BBC, CNN, The New York Times, and RFE/RL were some of the international news outlets that responded to the arrest by telling the story of the bloggers and the outcome of the trial.

And yet, while the saga of the prosecution of Emin and Adnan appears to end here, the "progressive youth" of Azerbaijan seem more determined than ever to continue united in their struggle.