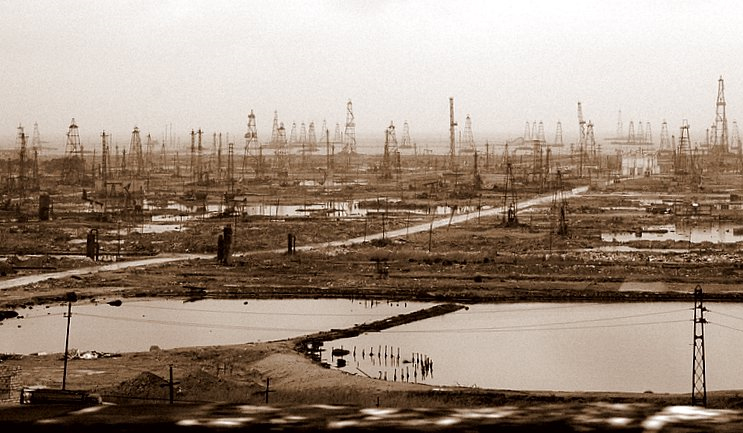 Azerbaijan (Today is a good day/flickr)

As a member of OSCE and the Council of Europe, Azerbaijan has made specific commitments to protect freedom of expression – but the current government does not always respect these obligations. International governmental and non-governmental organisations support several projects to improve freedom of expression, especially as regards the media. Yet, oil and gas make Baku increasingly resistant to criticism.

Even after the “Arab Spring”, Europe's borders are dotted with dictatorships. Weakened by the financial crisis, the old continent struggles to advance their mission démocratisatrice with their neighbours. In this context, countries traditionally gripped by state censorship will likely limit freedom of expression even more. A prime example is Azerbaijan, where Western governments and international organisations who support the country's government must delicately address the conflict between advancing democracy and satisfying energy interests.

The brutal treatment of non-aligned journalists by Azerbaijan authorities is not news. From illegal arrests and unpunished murders to torture and retaliation, international media has accurately reported everything. Unfortunately, Azerbaijan's government fully controls domestic television news. Educational reports show the opening of a gym and the president performing gymnastic feats under the eyes of the charming first lady, Mehriban. However, the sports journalists must carefully weigh their criticism of the national football team. It is inconceivable to spread alternative voices on politically sensitive themes. The picture is completed by journalists' self-censorship and the lack of professionalism, the criminalisation of libel, the complicity between the judiciary and the executive, the jamming of international broadcasts in the Azeri language, and blocking of the Internet. Article19 and Freedom House have also reported the emergence of worrying trends that signal the determination of Azerbaijan's dictatorship to strengthen repression. Restrictive measures were intensified for the 2009 constitutional referendum and the parliamentary elections of the following year. In May 2010, foreign journalists were targeted for the first time .

However, Azerbaijan – a member of the OSCE and the Council of Europe – is obliged to comply with specific international commitments. Facts show these institutional frameworks have limited influence over the Azeri autocracy. For nearly a decade, many NGOs have aimed to compensate for the lack of institutional checks and balances, but their efforts have questionable effects. Azeri citizens are sceptical about international actors contributing to freedom of expression in their country. The more disillusioned denounce the futile efforts of such organisations, even suggesting that they cover a tacit agreement with the Caspian oil-regime, which promises energy security as a reward for Western silence on human rights issues. To describe the role of the international community in promoting freedom of expression in Azerbaijan, however, one must resist the allure of conspiracy theories and evaluate the facts. Where have they spent the millions of euros and dollars allocated for the country's democratisation? Do the international organisations and NGOs produce the desired effects?

The key organisation is undoubtedly the OSCE, whose office in Baku can coordinate most international initiatives thanks to a strong presence and good relations with the Azerbaijan presidential administration. To avoid inconsistent actions, the office promotes dialogue between the various actors in the field, such as associations of journalists, NGOs, European institutions, and government agencies. For example, the OSCE routinely invites stakeholders to roundtables that gain international visibility because the embassies participate. "Sometimes we feel alone," an employee of OSCE's Baku office told Osservatorio, "which is regrettable given that the Council of Europe Convention mandate is much broader than ours. But they have their hands tied by lack of resources and personnel." The objective difficulties of moving in a hostile environment did not prevent the OSCE from implementing interesting projects. For example, the organisation offers the government legal advice on decriminalisation of libel – a reform urged by the international community. Similarly, OSCE experts contributed significantly to drafting the law on information passed in 2005 and the amendment of the code of professional ethics for journalists in 2010.

The OSCE activities normally intensify during elections and pre-election periods. During the presidential election of 2008, the Baku office worked with the BBC in preparing election coverage by reporters of the public broadcaster ITV. The Office for Democratic Institutions and Human Rights (ODIHR) monitored media coverage of candidates during the election campaign. The organisation also maintains a close relationship with civil society and NGOs. In addition to direct funding, the OSCE informally channels European funds and provides practical and political support to the most deserving organisations. A key partner, IREX, implements OSCE projects to promote the sociopolitical use of new media among young bloggers and journalists, including in rural areas. Another long-term collaboration takes place with the local NGO Media Mərkəzi in journalism training and with the Media Rights Institute and the Institute for Reporters' Freedom and Safety (IFRS) in the field of advocacy.

The politicisation of NGOs, resulting from their economic dependence on only a few donors, has caused a split between pro-government and anti-government organisations that hinders harmonisation between their projects. The OSCE continues to try diplomatically balancing criticism with cordial government relations. After all, the OSCE is highly political itself, because its survival ultimately depends on consensus from all 56 Member States. Russia's pressures to start phasing out missions in the southern Caucasus mark OSCE budget discussions. The situation is exacerbated by a partial diversion of funds to Central Asia and the financial crisis that in 2011 deprived the Baku office of important resources. The OSCE can compensate by expressing its political influence through its representative for media freedom, who repeatedly condemned the conduct of the Azeri government. Another new actor is the EU delegation, which – thanks to considerable funding – is trying to build up a more important role, not without controversy. According to the latest report of the European Instrument for Democracy and Human Rights, half a million euros was allocated to the Council of Europe to promote freedom of expression in Southern Caucasus and Moldova. In Azerbaijan, 300,000 euros was allocated to the Internews and IFRS NGOs. The magnitude of the last European funding to civil society surprised some analysts, also because the funds were allocated on politically sensitive themes, and such a large flow of money might bring the risk of dispersal.

Oil and gas make a country impervious to criticism

There is, therefore, no shortage of criticism from within. What few are willing to admit publicly, though, is that the West is losing influence with a government emboldened by its energy wealth. A Wikileaks dispatch reveals the doubts of Anne Sanders, a former U.S. ambassador to Baku, who sent a note to the State Department in 2008, "The increased confidence of the Azeri government is reflected in an increased resistance to external pressures, including those on democracy and human rights." The ambassador herself recognises oil as the source of renewed resolve in Azeri foreign policy and recommends that the American diplomacy combine pressures with "smart incentives". The government’s behaviour confirms the ambassador's worries: relations with Norway, Azerbaijan's energy partner, have been compromised since a Scandinavian politician dared to question President Aliyev on freedom of expression in 2007. He claimed a year later, "Azerbaijan does not need financial support or the recommendations of the international community [...] and will not allow any interference [...] what happens if we leave organisations such as OSCE and Council of Europe?" Last August, the threat turned into the rejection of visa application by Christoph Strasser, Special Rapporteur of the Council of Europe on political prisoners in Azerbaijan. So far, indeed, the only "smart incentives" applied by the United States have been to minimise criticisms, as was apparent from Hillary Clinton's trip last year.

In Azerbaijan, the genuine dedication of so many activists and international officials to the cause of freedom of expression collides with powerful political and economic interests that prevent the international community from speaking in one voice. Despite these limitations, however, it is important to persevere in these efforts: without the international community's help, Eynullah Fatullayev, Emin Milli, Adnan Hajizade, and many other journalists would no doubt be still in prison.