Journalists in Europe: one attack per day 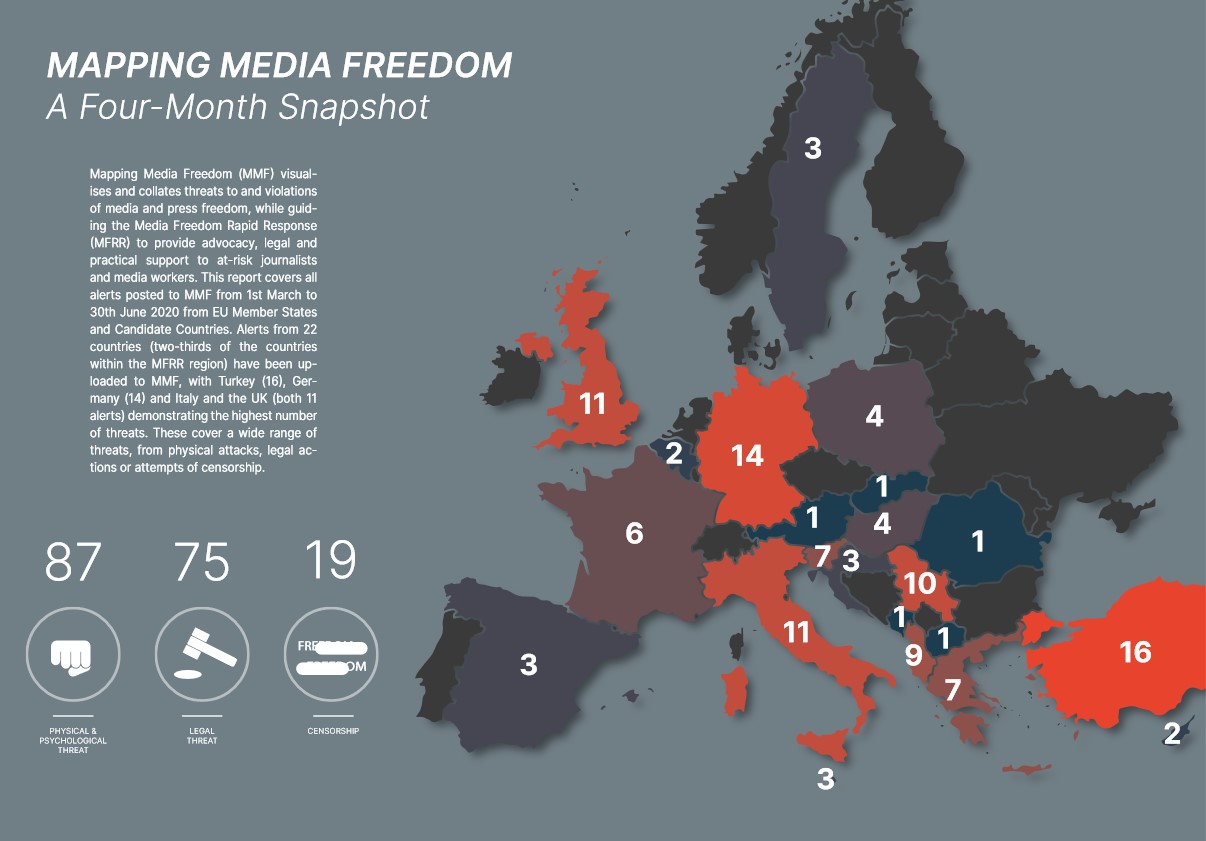 The data from the first four months of monitoring by the MFRR consortium confirm a concerning landscape for the safety of journalists and the state of media freedom, both in EU member countries and in countries as Serbia and Turkey

Almost 100 attacks and intimidations, 75 legal threats, and about 20 attempts at censorship: these are the disturbing findings of four months of monitoring violations of press freedom in EU countries and candidate countries (Turkey, North Macedonia, Montenegro, Serbia, and Albania). From physical attacks to social media threats, from vexatious lawsuits to arbitrary searches, reports – including from external users – have been recorded and verified by the Mapping Media Freedom platform, managed by the MFRR consortium of which OBCT is part.

“There is no one way journalists and media workers are targeted or attacked across EU Member States or Candidate Countries. There is a range of different types of threats faced by media workers”, reads the analysis by experts from ECPMF, the European Federation of Journalists (EFJ), and the International Press Institute (IPI). "The most common type of threat is Intimidation/Threatening (59), followed by Insult/Abuse (26) and then Discredit and Criminal Charges (both 17). However, this is only a partial picture”.

Journalists and broadcasters in Europe and in candidate countries are in fact subject to pressure and threats not only in notoriously autocratic regimes, such as Hungary and Turkey, but also in countries where attempts to control and gag the media are more subtle, such as Slovenia, where the independence of the public broadcaster is under threat, and in Poland, where an anomalous form of “repolonisation” of media ownership is attempted by limiting access for foreign investors. Most threats and intimidation come from individuals (42) and law enforcement agencies (27), followed by legislative measures (25), political parties (9), judicial measures (9), other outlets (9), large companies (8), organised crime (7), and public authorities (6).

The attacks therefore also come from above, and in recent months governments have taken advantage of the pandemic to limit the activity of journalists.

COVID as a pretext

The effects of the pandemic on the world of information, and consequently on the right of citizens to be informed, are one of the most interesting topics of monitoring which covers the 4 crucial months of the evolution of the coronavirus outbreak in Europe, from the beginning of March to the end of June 2020. With the closure of borders and the declaration of a state of emergency in many countries, governments have had a new, unprecedented pretext – but one they were quick to familiarise with and abuse. Out of 34 countries monitored, also thanks to the tracking tool implemented by IPI, violations related to the coronavirus have been recorded in 15 states, including new laws on "fake news", limitations on access to sources, and physical attacks on journalists, often prevented from entering press conferences or barred from asking questions.

Demonstrations and protests emerged as another area at risk for information workers: squeezed between the mass of demonstrators and the violence of the police, even if they clearly declare their role, journalists, photographers, and camerapeople came under attack on at least 28 occasions in 13 countries, including Germany, Italy, and France, involving a total of 45 people.

Serbia, on the podium of the black jerseys

With 10 recorded violations, one every 12 days, Serbia is one of the most cited countries in recent weeks on the Mapping Media Freedom platform: according to four alerts, the government attempted or managed to restrict the publication of information related to the pandemic, experimenting a new press conference format which, as it is conceived, hinders the work of journalists (written questions to be provided in advance, no interaction with interlocutors, no follow-up questions). One of the most striking episodes concerns a journalist, detained and deprived of her mobile phone and laptop for a number of hours after revealing chaotic conditions and mismanagement of the situation in a local hospital in Novi Sad – just for doing her job.

"Government control over information – explains the report – has created an environment in which journalists challenging the official narrative on the virus are accused of acting against the interest of the state or are labelled as friends of COVID-19".

Eight alerts document harassment and psychological abuse such as smear campaigns and online bullying against critical journalists – campaigns involving not only individuals hidden by anonymity, but also outlets close to the government. During this same period, three reporters received death threats, and investigative journalism network KRIK came twice under severe pressure for publishing investigations on links between criminal groups and police and politicians, as well as for publishing a photo of the son of President Vučić in the company of a well-known criminal.

The mere number of reports is not, and cannot be, the only indicator of the seriousness of the situation: more numerous than in Serbia are in fact the violations reported in Germany (14), in Italy and the United Kingdom (11), and in Turkey (16), but such a ranking would not provide a fair picture. The internal classification that the MFRR consortium drafts for research purposes to develop reaction and advocacy strategies, on the other hand, is based on both the severity and the type of the attacks, in the awareness that it is impossible to measure the climate of the media through a single numerical parameter: how to compare the murder of a journalist to the number of SLAPPs, or the number of journalists in jail with online harassment, or government censorship with aggression?

Hence the commitment to "build and strengthen the foundation of our analysis and as a result our ability to counter threats, address trends directly and reach out to support at-risk journalists and media workers across the EU Member States and Candidate Countries”.

The monitoring by MFRR has concrete repercussions on the advocacy activity and above all on the strategies and support tools to journalists and newspapers, like protected residences and emergency funds to cover legal expenses, replace equipment destroyed during demonstrations, and get psychological help for post-traumatic stress.