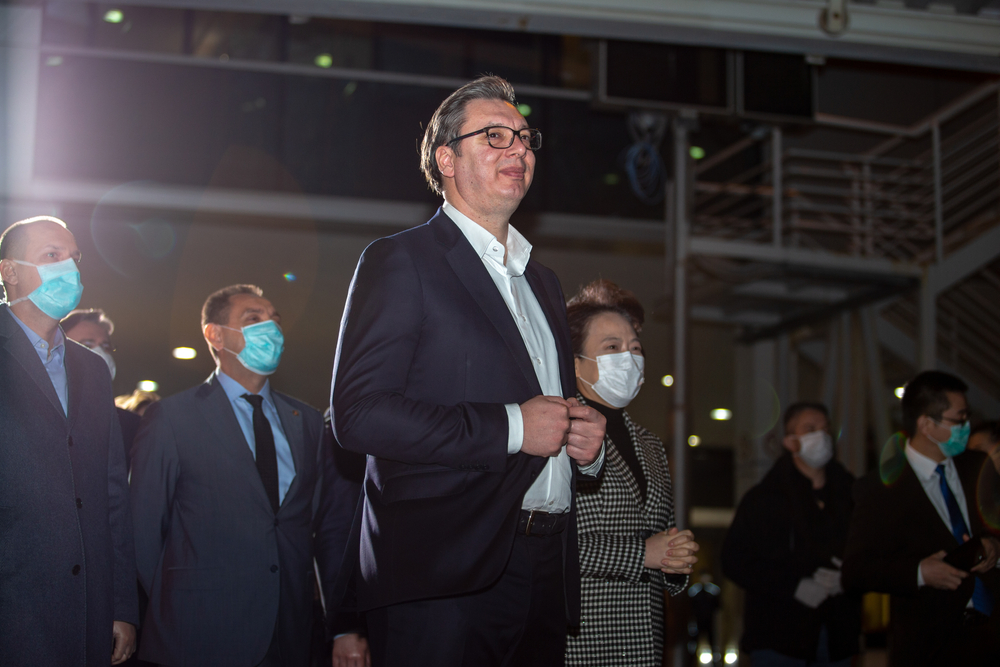 The Covid-19 pandemic is likely to be used by the Serbian authorities to violate the Constitution, break laws, and even formally attempt to introduce censorship – all this by manipulating citizens' fears

Serbia has entered the fourth week of state of emergency, proclaimed last March 15th, and the sixth week since, according to official data, patient zero was identified in the country. The Crisis Unit to contain the spread of the virus, consisting of doctors, informs citizens every day on the progress of the pandemic and on the numbers of the infected and the dead, while president Aleksandar Vučić addresses the population several times a week.

Citizens are mostly focused on news about the pandemic, the fear of the virus, the purchase of food made more difficult by restrictions on freedom of movement, compliance with the emergency containment procedures recommended by epidemiologists. Few people are concerned with the fact that the government has violated other, no less important, procedures by acting against the law and the constitution.

The dubious legitimacy of the state of emergency declaration

Contrary to the law, that prescribes that only the Serbian parliament can approve the introduction of the state of emergency, president Vučić proclaimed a national emergency on March 15th in the presence of prime minister Ana Brnabić and president of Parliament Maja Gojković.

Before the introduction of the state of emergency in Serbia, the election campaign for the political elections initially scheduled for April 26th was underway, and the ruling party (Serbian Progressive Party, SNS) had already started a large signature collection campaign for the presentation of the electoral list. During a press conference held in late February, a doctor stated that the new coronavirus was "the most ridiculous virus in the history of humankind", and that women affected by the virus tend to exhibit milder symptoms thanks to the estrogens so, in his words, they could safely go shopping in Milan. During the same press conference, president Vučić advised citizens to consume avocado and rakija to prevent the risk of contagion.

Then the situation suddenly changed and the president explained that the Parliament could not meet due to the coronavirus epidemic, which at the time had not yet been officially proclaimed. Paradoxically, the state of emergency was introduced four days before the approval of the March 19th epidemic ordinance.

With the introduction of the state of emergency and the suspension of parliamentary work, all decision-making power was concentrated in the hands of the ruling party. Following the recommendations of the Crisis Unit, the Serbian government has introduced some contradictory measures that do not comply with the laws and regulations in force.

With the ordinance on the ban on gatherings in closed spaces, kindergartens, schools, theatres, and cinemas were closed as well as restaurants, while gaming and betting rooms remained open and only closed a few days ago.

The latest restriction on freedom of movement introduced by the government prohibits gatherings of more than two people in public places. At the same time, employers were left free to organise the work as they pleased. Those who can have adopted smart working. However, the ban on gatherings does not apply to companies, which continue to work but often do not provide their employees with the necessary protective equipment. In some cases, workers stopped working, denouncing the lack of masks and disinfectant products.

Despite the harsh penalties foreseen, and already applied, for those who violate the measures adopted in the state of emergency, the authorities did not intervene when, a few days ago, a group of faithful gathered in front of a church in Novi Sad and received communion, all from the same spoon.

The ordinance on the limitations and the prohibition of movement was also issued in a manner not compliant with the law. Some jurists have pointed out that such a measure can only be approved by parliament or, in exceptional circumstances, by the government. However, the order in question was issued by the Minister of the Interior and has been amended several times. The curfew introduced by the ordinance lasts from 17:00 to 05:00 on weekdays, while during the weekend the timetable changes, and the last version forbids leaving home from 13:00 on Saturday to 05:00 on Monday.

Citizens over 65 are allowed to leave the house only on Saturdays (until last week they were allowed to go out on Sundays) from 04:00 to 07:00, exclusively to go shopping in the stores that remain specially opened. Even the times when it is possible to walk the dog change constantly, only the allowed duration of the walk has remained unchanged: maximum 20 minutes, with the obligation not to move more than 200 metres away from home.

Those who do not regularly follow the news risk violating movement restrictions without knowing it. To further increase the confusion related to the constant changes of the rules, there are repeated announcements on the possible introduction of the absolute ban on leaving the house for several weeks.

Measures taken to deal with the emergency are usually made public by president Vučić during press conferences broadcast live by all national TV stations. Whenever Vučić appears in public, he takes the opportunity to threaten "disobedient" citizens, to implore pensioners not to leave the house, to boast of having personally committed to the purchase of new respirators, and to attack opposition figures who, in those few independent media outlets that give space to their opinions, criticise some government decisions.

The censorship and arrest of a journalist

On March 28th, the Serbian government approved a provision on information during the pandemic, which provides that only the premier and those authorised by the Crisis Unit can disclose information on the ongoing health emergency. Anyone who publishes information disclosed by an "unauthorised subject" risks one of the sanctions introduced in the context of a state of emergency. Serbian journalists' associations and a part of public opinion protested against this measure, which actually introduced censorship, but the government justified itself by saying that the purpose of the measure was to counter the spread of false news.

The first effects of the measure began to emerge soon. On April 1st, Ana Lalić, journalist of the Nova portal, was arrested because of an article in which she reported the dangerous conditions in which doctors and health workers of the Vojvodina Clinical Center (KCV) in Novi Sad work. On the basis of the complaint filed by the KCV – which denied what was reported in the article – the prosecutor ordered a 48-hour detention against the journalist, while the police searched her apartment, seizing her computer and two cellphones.

Ana Lalić was released the day after the arrest, and prime minister Ana Brnabić said on the same day that she had decided to withdraw the controversial measure at the request of president Vučić. However, it seems that the premier was prompted to withdraw the measure by reactions from Serbian journalists' associations and various international organisations that severely criticised the measure and the decision to arrest the journalist.

In Serbia, not only independent media, but also non-governmental organisations struggle to find information of public interest. At this time, it is not known exactly how many respirators there are in Serbian hospitals. President Vučić has repeatedly spoken of the difficulties in purchasing respirators. Transparentnost Srbija (Transparency Serbia) recalled Vučić's recent claim that Serbia has already ordered and paid for over 1,000 respirators. However, this piece of information is not found on the public procurement portal, where only some documents have been published relating to a tender for the urgent purchase of 15 respirators, called in the first half of March.

Campaigning on the coronavirus emergency

Vučić has concentrated all the power in his own hands – he decides when citizens can leave the house and when they can take the dog for a walk; it is thanks to him if respirators and other devices necessary to face the emergency arrive in Serbia; only he has the right to approve or cancel a government decision.

The president has blamed the spread of the coronavirus in Serbia on the gastarbeiter who, when the epidemic started to spread in Europe, returned to Serbia bringing the virus with them, while the premier said that the massive return of Serbian workers was an anti-patriotic act because they burdened the Serbian healthcare system.

Meanwhile, the Serbian citizens, fearing the epidemic and the news of the increase in the number of the infected and the dead, respect the measures introduced by the government and only rarely, on social networks, do they question their legitimacy. In the past eight years, since Vučić came to power, almost all institutions in Serbia have been destroyed, and it is on their ruins that Serbian citizens will wait for the end of the quarantine – which will end, of course, when president Vučić says so.