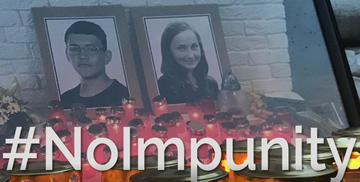 The undersigned international and regional press freedom and journalism groups welcome the start of the murder trial this week against the suspected killers of Slovak journalist Ján Kuciak and his fiancée, Martina Kušnírová

The suspects on trial at the Specialized Criminal Court in Pezinok, Slovakia, include the alleged mastermind, Slovak businessman Marian Kočner, who prosecutors say ordered Kuciak’s murder in retaliation for his journalistic work. A confidante of Kočner’s, Alena Zsuzsová, is charged with having arranged the murder via a middleman, Zoltán Andruskó, who in turn contracted two alleged hitmen, cousins Tomáš Szabó and Miroslav Marček.

Andruskó previously admitted guilt to prosecutors and was sentenced to 15 years in prison in December. He testified in court on Tuesday against Kočner and Zsuzsová, stating that Zsuzsová provided him with a detailed surveillance file on Kuciak on Kočner‘s behalf and asked for the journalist to be killed and his body disposed of without a trace.

Kuciak and Kušnírová were murdered in their home in Veľká Mača on February 21, 2018. Marček plead guilty on Monday, describing to the court how he knocked on Kuciak’s door, shot the journalist in the chest, and then followed Kušnírová into the kitchen and shot her in the head.

The murders rocked Slovak society, prompting the largest protests since the Velvet Revolution.

The undersigned organisations believe that the start of the trial marks an important step toward securing justice for Ján and Martina and for their families, who have suffered a deep and irreplaceable loss. We stand in solidarity with them.

The killing of two people to prevent the release of news is an abhorrent and unacceptable act. It is imperative that all of those who played a role in this crime receive just punishment. The Slovak justice system must ensure that impunity is not allowed to gain any foothold and must demonstrate that no one is above the law.

We also underscore the need for action beyond this criminal trial. The Slovak authorities must investigate and take steps to counteract the conditions that allowed for this murder to take place and introduce effective measures to prevent violence against journalists in the future. The authorities must also fully investigate all attacks on the press, including the mass, unlawful surveillance of numerous journalists allegedly conducted at the behest of Kočner.

All of the undersigned groups will be closely following developments in the proceedings, a reflection of the great international interest in ensuring justice in this case. Representatives of the Vienna-based International Press Institute (IPI) and the Organized Crime and Corruption Reporting Project (OCCRP) are also attending the trial as observers.