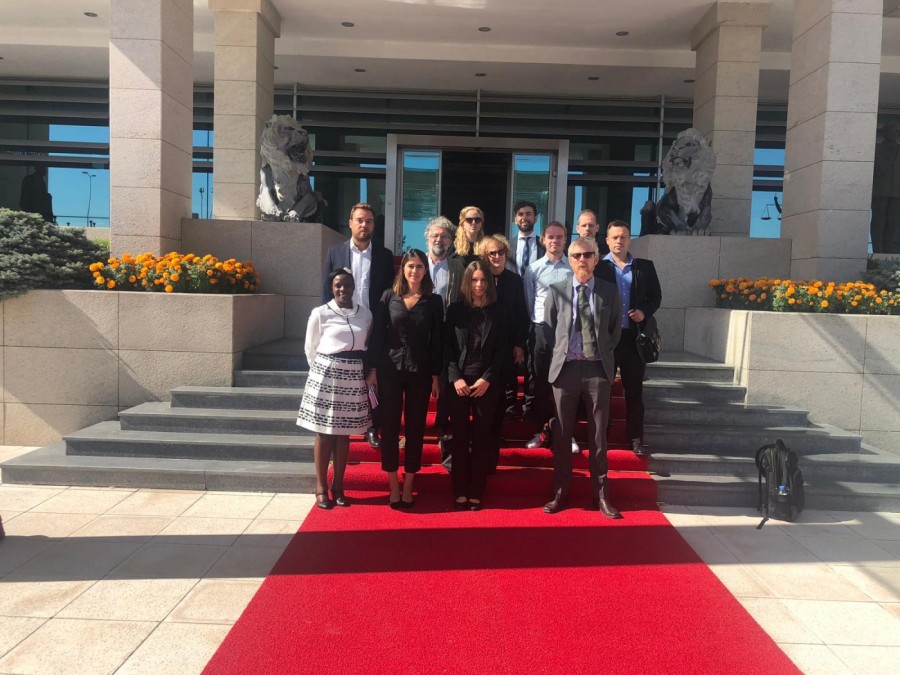 The delegation in Turkey (© ECPMF)

For three days our partners of ECPMF joined 7 other freedom of expression organisations on a joint mission to Turkey, led by the International Press Insitute. Despite some glimmers of hope, press freedom in the country remains in crisis. Here the final statement, released on 13th September

We, members of international press freedom groups, report that press freedom and the rule of law in Turkey remain in crisis despite grounds for very cautious optimism, such as yesterday’s ruling releasing several former Cumhuriyet journalists.

Over three days this week, our international press freedom delegation held meetings with journalists, civil society, the judiciary and the authorities to assess planned reforms and the continued crackdown facing journalists in Turkey. Convened by the International Press Institute (IPI), the delegation also comprised representatives from Article 19, the European Federation of Journalists (EFJ), the Committee to Protect Journalists (CPJ), PEN International, Norwegian PEN, the European Centre for Press and Media Freedom (ECPMF) and Reporters Without Borders (RSF).

A Judicial Reform Strategy, announced in May 2019 by the Turkish government to address flaws in the justice system, will not be credible unless it guarantees judicial independence in both law and practice and ends the persecution of journalists.

Protecting press freedom and promoting the transnational public debate on violations registered in the European Union, in the countries of enlargement and Eastern Partnership are the objectives of the European Centre for Press and Media Freedom (ECPMF). OBCT is part of the project, developing and curating the Resource Centre on Media freedom in Europe through a constant work of information and in-depth analysis on key issues for European democracy.

We welcome the intention of the authorities to undertake reform. However, our delegation highlighted in meetings with officials how the press freedom environment in the country has not improved since the lifting of the State of Emergency in July 2018, how scores of journalists remain behind bars or under travel bans as a consequence of an extended, politically motivated crackdown against the media, and how a subsequent wide-ranging capture of the judiciary has progressively and severely damaged the rule of law and the public’s right to access information.

As part of any judicial reform strategy, Turkey should urgently revise anti-terror and defamation laws, repeatedly abused to silence critical press. It should take immediate steps to end the arbitrary prosecution of journalists, characterized by baseless indictments, politically driven judgments and severe violations of the right to a fair trial. It should reverse moves that allow disproportionate political interference into the operations of the judiciary, including the April 2017 amendment to Article 159 of the Constitution, which allows for political control over the nomination procedure to the Council of Judges and Prosecutors, affecting the independence of the entire judicial system.

As proposed changes are discussed and examined, we urge Turkish authorities to closely involve independent civil society, journalists and international experts in the fields of freedom of expression, judicial independence and the rule of law and to enact reforms to bring the independence of the judiciary in line with Turkey´s commitments under international human rights law.

The delegation met with local civil society groups and journalists in Istanbul and then travelled to Ankara, where it met with the Constitutional Court, the Court of Cassation, representatives of the Ministry of Justice, and the EU and other foreign diplomatic missions. The delegation regrets that a long-planned meeting with Justice Minister Abdulhamit Gül was cancelled one day in advance.

In its meeting with the Constitutional Court, our delegation said Turkey’s highest judicial body must give priority to applications regarding detained journalists and administrative measures blocking websites, including Wikipedia, which has been banned in Turkey for two-and-a-half years. The delays in these cases seriously harm the public’s fundamental right to access information. We also expressed concern over recent inconsistent rulings involving journalists.

The delegation strongly welcomed a ruling on Thursday evening by the Court of Cassation to overturn convictions for seven defendants in the Cumhuriyet trial, concerning cases of journalists detained because of their work. The ruling led to their release. While that decision marks belated but significant justice, it cannot reverse the personal damage done to those defendants as a result of their extended imprisonment. In addition, Cumhuriyet’s former accountant, Emre Iper, remains behind bars and journalist and MP Ahmet Sik is set to be retried under a new set of more serious charges. The delegation had been denied permission at the last minute to visit the Cumhuriyet journalists in prison on Wednesday, in a decision illustrative of a systematic denial of prison visits to observers.

In addition, the delegation is profoundly alarmed by the implementation of new rules from Turkey’s audio-visual regulator, the Radio and Television Supreme Council (RTÜK), that extend the agency’s control to online broadcasters, threatening their existence through a costly and opaque licensing regime.

Finally, we are concerned about the system of issuing press cards, which has been taken over by the presidential office and is profoundly affecting the capacity of national and international media to operate in the country.

Protecting press freedom and promoting the transnational public debate on violations registered in the European Union, in the countries of enlargement and Eastern Partnership are the objectives of the European Centre for Press and Media Freedom (ECPMF). OBCT is part of the project, developing and curating the Resource Centre on Media freedom in Europe through a constant work of information and in-depth analysis on key issues for European democracy.