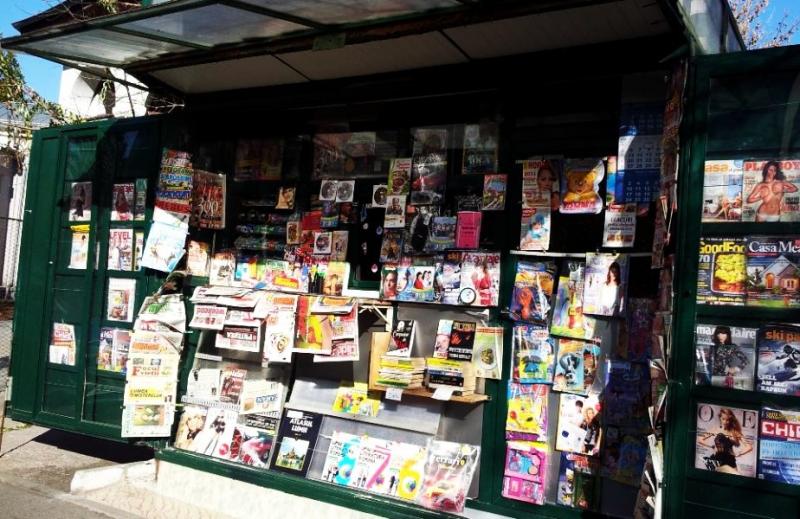 Starting from Bucharest newsstands, the closing down of distribution channels of newspapers and magazines represents one of the main threats agains press freedom in Romania. A comment

(Originally published by Dilema Veche , partner of the ECPMF project, on September 28-October 4, 2017)

According to a statement released by newsstand owners last week, the council of sector 4 of Bucharest has been illegally closing off stands. As I write, a one-day strike of the capital's newsstands is being organised. The council denies the allegations, swears that the freedom of the press is its first and last thought every day, and states that dozens of newsstands have been authorised just over the last year. Newsstand owners say the opposite – that the council has been moving them around all the time, denying them permits, and therefore exposing them to police harassment.

This might seem like one of those typical Dîmboviţa situations [a region in Romania, stereotypically known for futile quarrels, ed.], a noisy quarrel between kiosk owners and the council. However, this incident is just an episode of a long tragedy – the collapse of press distribution networks.

In 2017 Romania, entire cities no longer have press distribution, not to mention rural areas. The great arteries of our big cities and whole neighbourhoods do not even have one kiosk. The monthly meetings of the publishing editors invariably begin with the announcement that one, or two, or three local distributors have disappeared since the previous meeting.

According to more than a few commenters, we are witnessing a tacit, slow, and cross-party effort to sever the link between the press and the public. A larger audience enables the press to support itself and, therefore, be independent. On the contrary, a shrinking audience leads to lesser wages – which makes it impossible to hire quality staff – and makes the press dependent on the cash of entrepreneurs and, therefore, servile.

We have the press we have because we have no readers. And one of the main reasons we have no readers is the strongly limited access to the press. The situation is the same in the book market – the lack of bookshops is directly linked to the fact that Romania is the EU country with the least readers. The same goes for the movie market: what is the point of having some excellent filmmakers in Bucharest if there are no longer cinemas in the country? The music market, with its lack of concert halls, is also one of the least significant in Europe. I hear that in Romania, a country of almost 20 million inhabitants, a gold disc means selling 5,000 copies, like in Singapore (5.6 million inhabitants) or Iceland (almost 400,000 inhabitants)! This lack of interest in the development of infrastructures to support a stronger relationship between creators and public makes us look like primitives. Will we ever understand it?

In general, the link between culture and the public is a thin one. It is extremely easy to turn the public against newsstand owners and the like. Against this backdrop, it is not surprising that conspiracy theories have flourished. Someone – I believe, many – wants us ill-informed dummies. Why? To be fooled, manipulated, or deceived. Who? Here, the public imagination has a huge choice of enemies: the Russians, the Americans, the Mossad, the Hungarians, the PSD, Băsescu, the Masons, Soros, the new world order, finance, etc. But what if – let's say – we are making dummies of ourselves, day after day?

I know that every plea pro domo sua is met with utmost suspicion in Romania, the country of chronic mistrust. Yet, I will try – especially because I am only secondarily arguing in favour of our Dilema Veche. In fact, I am arguing in favour of press freedom, of our rights as journalists to write for you, and of your right to have access to what we write. Furthermore, we – those who write the articles you read – are also readers in our turn. So, when I say that my plea is, in fact, for all of us, I am not lying. I am arguing for the health of the society we live in, as the communication channels between the press and the public must be 100% open at all times. Just as blood must circulate in the body for us to be healthy, newspapers and magazines must circulate without obstacles for the country to be healthy. Even if the council of sector 4 became more reasonable, the issue would not be resolved. We need a law that really protects the press in Romania.

Like any politician (albeit far from being like just any other politician), Thomas Jefferson got angry when newspapers wrote something he did not like. Perhaps he was right, or perhaps the newspapers were right – not even now, after such a long time, do historians agree on these issues. However, Jefferson wrote one of the strongest statements ever in support of the press. In a letter of 1787, he states "if I had to choose between having a government without a press and a press without a government, I would not have a moment of hesitation in choosing the second". If we understand that such a foundation turned a country into the most powerful in the world, we could hope for a future.