Protests in Bulgaria, the voices from the square 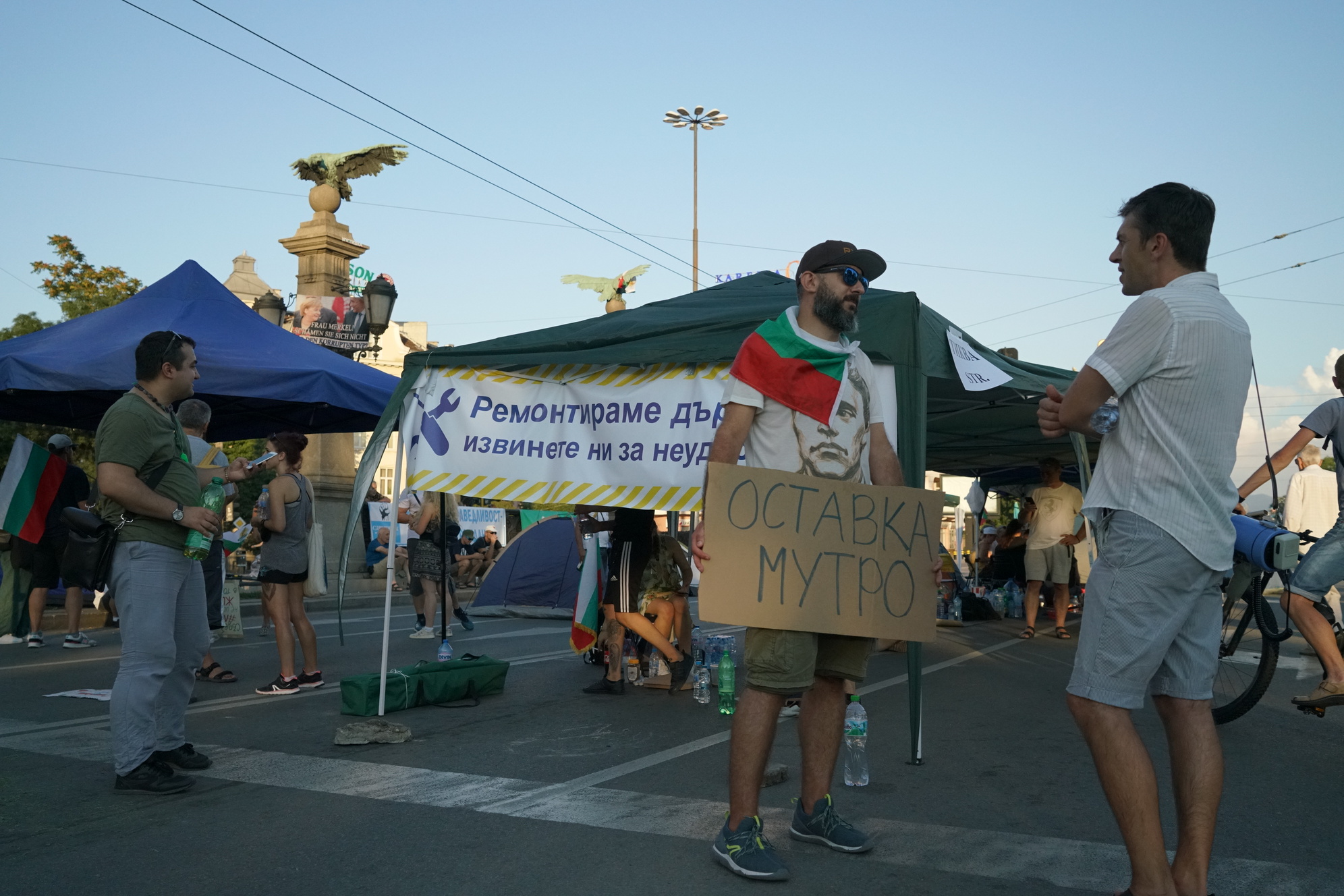 Protesters on the "Eagles' Bridge" in Sofia - fmartino/OBCT

Protests against the Borisov government have been going on for over 20 days in Bulgaria. Our correspondent was at the heart of the demonstrations – in the centre of capital Sofia – to collect the live voices of the protest

As has been happening for over 20 days, the street that crosses the heart of the Bulgarian capital, from the park of Borisovata Gradina to the Presidency passing through the University and the low parliament building, quickly comes alive with groups of citizens who walk, cycle, and skate. Many waving the Bulgarian flag, they take over the public spaces, the worn, still hot asphalt of the boulevards and sidewalks, to renew their protest against the Borisov government.

Traffic is blocked by the big demonstration of last Wednesday night, the most animated since the protest started, with at least 20-30,000 people on the streets. Since then, groups of citizens have opened their tents on the main road junctions of the city, paralysing traffic in the centre 24/7.

Among the various "protest camps", Orlov Most stands out, the bridge of eagles, traditional epicenter of protest and civil disobedience movements in Bulgaria. Among the many who preside over the bridge, now day and night, there is Stoyan Atanasov, a young law student from Burgas who, after a long experience abroad, decided to seek his way in Bulgaria.

"We have never seen a real democracy in our country, and now we want it", he tells us under the shelter of one of the canvas kiosks lined up along the wrought iron railings of the bridge. "I wish the infinite transition would end and that a normal elite would finally rule". According to Stoyan, many of those in the streets are young people who have returned home just like he did, also because of the coronavirus crisis.

“If these protests fail”, he says firmly, “our generation will definitely lose all hope of being able to make its dreams come true here. In a country already marked by a very serious demographic crisis such as Bulgaria, this could prove fatal. I want to stay, but if things don't change, I will be forced to leave again".

A little further, towards the rectorate of the "Sveti Kliment Ohridski" University, a group of people discusses lively. Many wear the pennant of "Boets", an organisation born in 2013 during the demonstrations against then Prime Minister Plamen Oresharski, and which in recent years has distinguished itself above all in the struggle for an actual rule of law in Bulgaria.

We stop to talk to Georgi Georgiev, president of the organisation. “The reasons for the explosion of anger and protest are many, all connected. The main one is the tragic spread of corruption that has been affecting the country for years and which the institutions have proved unable to control. The second is the infiltration of organised crime at all levels of the administration. The third – a direct consequence of the first two – is the lack of justice and rule of law in Bulgaria".

According to Georgiev, the protests must not stop until the primary goal is achieved – the resignation of the Borisov government and chief prosecutor Ivan Geshev. “If we manage to maintain unity and determination to the end, we will win. Resignation is the first necessary step, which must be followed by the approval of a new electoral law capable of finally guaranteeing free and fair elections".

After the big demonstration on Wednesday evening, the level of the conflict has risen with the blockade of central junctions in the centre of Sofia, but also with the interruption of traffic on some of the main motorway arteries, which has caused many inconveniences. Borisov himself invited protesters "to burn the 'Sekvoya' residence [the Prime Minister's official residence] if necessary, but to clear the streets and let citizens live".

I ask Georgiev how far they are willing to raise the level of confrontation. "We ask for legality, therefore we want to continue our struggle with legal means", he replies. “We certainly don't believe in violence because chaos and anarchy don't solve problems. But blocking traffic, not only in Sofia, but in the country, is civil disobedience, an instrument that we believe is indispensable to make our voice heard".

Going towards the presidency, I meet the colourful and noisy procession that every evening, after gathering in the "Largo" – the triangular square that both the presidency and the council of ministers overlook – runs through the centre's streets, going up to Orlov Most via different itineraries. I follow the section that goes down Rakovska street, making a long stop under the glazed building of the EU representation in Bulgaria. Many of the signs raised by the crowd appeal precisely to the Union, seen by most as one of the factors capable of pushing the government to step down and the country to a more sustainable modernisation. 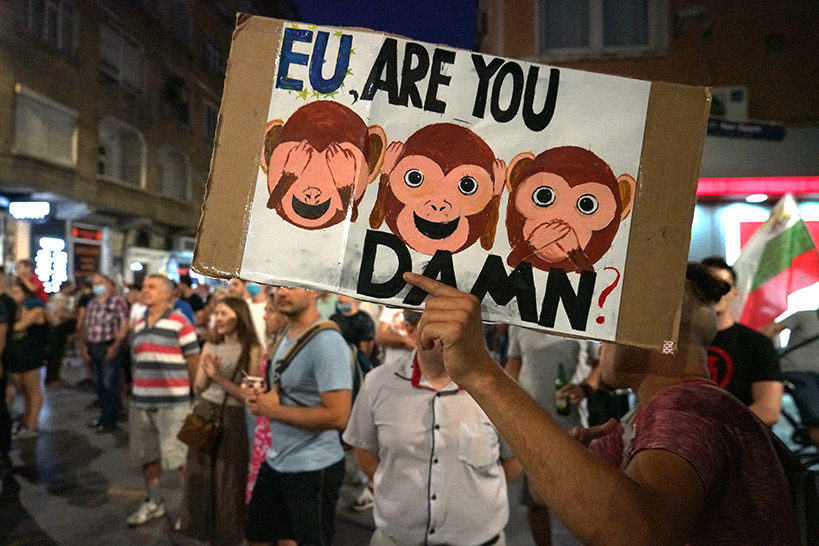 Protesters outside the EU headquarters in Sofia (photo F. Martino)

"European membership remains a life jacket for Bulgaria, I am convinced that without Europe the conditions of our country would be much worse", says Tervel Nikolov, a small entrepreneur active in the purchase and sale of agricultural land. "Unfortunately, the lack of rule of law and widespread corruption mean that funds from Brussels, including those recently approved for the Recovery Fund, can be used without government control".

"Our politicians", continues Tervel, shaking his head, "do not have the slightest idea of ​​what 'sustainable development' means, they are only capable of vampirising national and EU resources. In their hands, we will always remain the continent's unhappy Cinderella".

Among the thousands of people who walk on the Boulevard Vasil Levski to scream and protest despite the late hour, there is Vanya Tsvetkova, a civil servant. When I ask to interview her, she is skeptical, and only agrees when I show her my journalist's card.

"These are difficult times", she says. “I am not afraid, but in institutions the control exercised by power is profound, widespread. Generally public sector workers are afraid to express their discontent for fear of losing their job. That's why I think there are mainly students and professionists in the square".

Vanya is ready to fight to the bitter end but, as she explains, “the system is so infiltrated that even the resignation of Borisov or the attorney general could not guarantee a real change, but here we have to start. The generation I belong to, and who lived through the transition, has been deceived. Today I am here because I don't want the same to happen to our children too".

As the hours pass, many go home, in small groups. The police watch, but let go: clearly, after the clashes that marked the first days of protest, the government has given orders to lower the level of tension as much as possible, confident that the August holidays and a certain general tiredness would demobilise the square.

Before leaving I stop to talk to Arman Babikyan, a public relations expert and former radio journalist, who has become one of the most popular voices of the protest. “Our protest is a matter of values. We want to truly, and not only formally, enjoy the founding values ​​of the EU: democracy, freedom of expression, and not only receive economic resources that end up largely in the pockets of a few".

The government's response to the protests, according to Babikyan, has so far been "arrogant". "They offered the head of some minister and promised us some money, like when we give children candy to make them stop crying, but this time we won't be duped".

"This time, unlike in the past", he tells me hopefully, "I see that people from all over the political spectrum and from different social backgrounds have joined in their discontent and desire for change. Something that perhaps only happened in Bulgaria in the early 90's, when we fought to end the dictatorship. I believe that the wall of fear created by this elite has finally been broken".