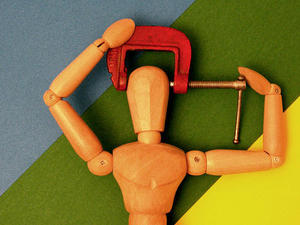 Donors hardly ever support projects if they are not partially co-financed by the applicant. In principle, this makes total sense, but in practice the rule often sets off creative accounting and limits NGO capacities

Ask an NGO manager what scares him/her most and s/he is likely to say: co-financing. It is the rule in grant making that the donor does not cover the entire cost of the project, meaning that the grantee has to secure a portion of the funding from other sources.

As a principle it is fair, but in practice it has never brought anything but headaches and a bending of the rules. It is especially problematic for NGOs that also happen to be the most affected by the mechanism, as prime recipients of grant funds.

The rule has been around for a long time, but it has become more stringent lately under EU grant regulations.

It can be inferred to mean many different things. It relates to ownership: the implementing agency has to contribute to the cause. It is associated with sustainability: the recipient is not to be solely dependent on the donor, other sources of finance are to be pooled in. It is about coordination, cooperation, mobilising (grass-roots) support. All big words. Alas in practice, the rule mainly give project writers a migraine and stimulates creative accounting.

The reason is simple. NGOs generally (with small exceptions) do not have unrestricted money, that is, funds which they can spend as they see fit. Most of the funding they have is earmarked, thus has to be spent for very specific purposes listed in their grant contracts.

If NGOs had 'free money', such as that from a core grant (a rare breed lately), or from unrestricted donations (individual, corporate), or self-generated revenue, the problem would not exist. They would simply pull out the co-financing amounts from this chunk of non-earmarked funds.

However, this is most often not the case. Whatever money NGOs have is generally tied up. So, in order to be able to use any funds as co-financing, the consent of the donor is required.

This is where problems start. In fact, coordinating donor funding for this purpose often borders with the impossible. Individual donors care about their own projects, despite more projects possibly sharing similar objectives (such as promoting the same NGO mission, gender equality, etc.) and thus hypothetically linking up in terms of co-financing.

But the question of bringing different projects together for co-financing purposes cannot even be asked (rare exceptions do exist).

Getting around the red tape

Too much regulation. So what happens in practice is that funds are shifted anyway, without donor consent. The funding provided by one donor, let's say for travel, communications, staff, is presented as co-finance (expense receipts) for another project.

Some would even argue that this practice is to some extent legitimate. It may appear so but it is not, in the sense that donors providing funding for something specific may end up funding other budget items without being aware of this.

Another way of creating co-finance is by “saving” on one project in order to have money to put into another one. Some organisations pay their staff full salaries as per the project's official budget, and then unofficially make them donate part of their wages back to the organisation. And so forth. Either way the practices involved are neither ethical nor (often) legal.

In short, the principle does not work. Especially not for NGOs. It may work high up, among big donors, public or private alike, which have the autonomy to operate according dictates like the following “if you put ten million in, I will put in three”. It may also work with bodies that have autonomous funding, such as municipalities, universities, private companies (eligible for some EU grant programmes).

However, prime grant seekers and recipients are NGOs. And for them it generally does not work, thus they end up conducting some of their activities illegitimately.

Many donors, aware of the reality, apply the rule rather leniently. They may for example request co-financing without asking for the financial records (receipts) proving it. They may also allow co-funding, to be contributed in-kind (e.g. rent free offices, use of existing equipment, unpaid staff or volunteer time, etc.). This is easy for most NGOs to provide and effectively resolves the issue of co-financing without accounting acrobatics.

At the EU level

However, for some donors, for EU grant programmes in particular, the rule must be applied more restrictively. In-kind contributions are not eligible as costs, meaning that they can be contributed and noted in the narrative, but they cannot be counted as part of the budget itself.

Moreover, the grantee is requested to present the financial records of the co-financing (no turning of a blind eye) and such funds often have to go through a separate account. All this makes creative accounting attempts much more difficult and the problem remains unsolved. In fact it is exacerbated.

Donors could say that it is not their problem. Well, then the first question they should ask before awarding a grant is whether the recipient has unrestricted funding. This would obviously be a rhetorical question: a quick glance at the applicant's annual accounts is enough.

Otherwise the donor could decide that the funding is not only for NGOs, but for other organisations that do have funds for co-financing. This would not work either. Such guidelines would in fact exclude most relevant applicants.

So what should be done? There are several alternatives. Co-financing could be minimized. Some EU grant programmes follow this option asking for 5% of co-finance only. This is fair.

The in-kind option is also an elegant solution, hence donors should revert the trend of excluding it. This applies for EU programmes in particular. Precise rules, however, would be needed on how to calculate it.

Donors could also stop asking for co-financing, especially from organisations which (they know) cannot produce it.

Finally, the sector would surely benefit from an open debate on how and under what conditions different projects' funds could be combined. Such a debate does exist but it is chaotic and unofficial. A clear set of rules agreed by all could help NGOs work more constructively and do wonders for the effectiveness of project work.