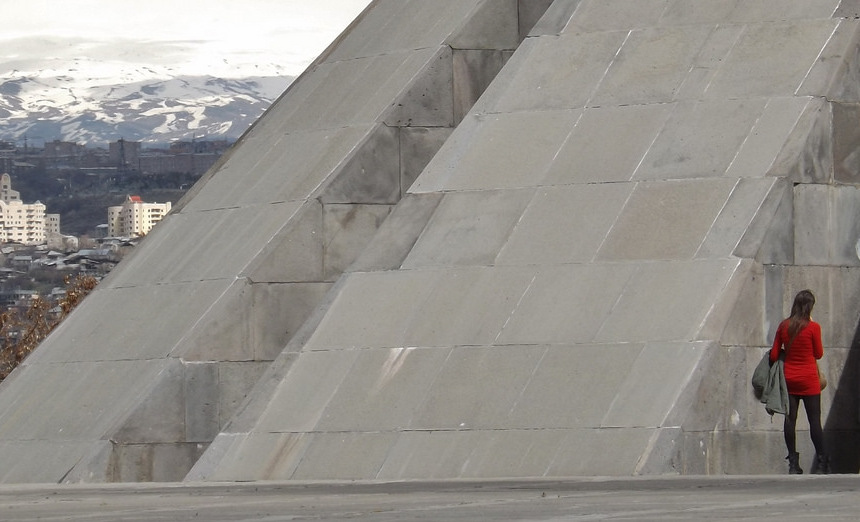 Two dates of symbolic importance for Armenia passed recently. One is well-known all over the world: April 24 marked 99 years since the Armenian genocide in Ottoman Turkey. Another date is less known outside of the region: on May 12, exactly 20 years ago, the ceasefire that put an end to the war in Nagorno-Karabakh was signed. These two dates symbolize what can be considered the two main external challenges for Armenia today: Armenia-Turkey relations and the Nagorno-Karabakh conflict. During the latest weeks there have been certain developments in both issues that may be signs that status quo is changing. However it is still hard to say whether these changes are for better or for worse.

Against the background of the crisis in Ukraine, where Kiev, Moscow, Brussels and Washington are unable to stop the escalation, the ceasefire in Nagorno-Karabakh suddenly seems almost a success story. Of course, today’s imperfect peace is fragile: Azerbaijan and Armenia are effectively divided by a frontline and engaged in an arms race. Time after time border incidents take place, sometimes with tragic consequences, as soldiers are killed or wounded, mostly by sniper fire. However, in spite of all this, the ceasefire has largely held for 20 years, remarkably, in the absence of a peacekeeping force in the region.

Sergey Minasyan, vice-director of Caucasus Institute, a Yerevan-based think tank, says that two major factors have contributed to the continuing relative peace . One is the balance of power: though Azerbaijan has been heavily arming itself, Armenia has so far managed to keep up, partly through its alliance with Russia and membership in the CSTO (Collective Security Treaty Organization). The other factor is the presence of international institutions, first of all the OSCE, or more precisely, the so called OSCE Minsk Group Co-Chairs, i.e. Russia, the U.S. and France.

Recently, the newly appointed US representative James Warlick has been the most active among the mediators. Thus, he initiated a series of meetings with stakeholders, including, for the first time, representatives of Armenian and Azerbaijani Diasporas in the U.S. Later, he issued a statement, in which he voiced the main principles that have been on the table of negotiations for several years. Warlick’s activity has made him a target for angry reactions from both sides: Azerbaijani government was unhappy about his meetings with US Armenians, and both Armenian and Azerbaijani media criticized his statement. However, if Warlick’s aim was to lift the veil of secrecy surrounding Nagorno-Karabakh talks and to revive the debate around the peace plan, he definitely succeeded.

In his statement Warlick also stressed the importance of 2nd track diplomacy, i.e. contacts between civil society. However, the future of citizen diplomacy when it comes to Nagorno-Karabakh is today uncertain. On April 30, Azerbaijani well-known journalist Rauf Mirkadyrov, who had participated in numerous citizen diplomacy programs with Armenian colleagues, was detained by Azerbaijani authorities on charges of spying for Armenia. Several days later, two prominent representatives of Azerbaijani civil society, who also participated in such programs, Arif and Leyla Yunus (they are husband and wife), were detained with similar charges.

This is the first case when such charges are leveled at participants of citizen diplomacy efforts. The authorities, whether in Yerevan, Baku or Stepanakert, have traditionally tolerated 2nd track diplomacy efforts, mostly sponsored by the West, even though these programs were often viewed with suspicion. Participants of such initiatives were sometimes harassed by nationalist activists, police or security services, but they were not jailed. It is hard to say whether the recent arrests are a conscious attempt to stifle citizen diplomacy programs or an attempt to silence government critics. Since Ilham Aliev came to power, Baku has been more suspicious of such efforts than Yerevan and Stepanakert, since it saw them as legitimizing the status quo .

Whatever the case, recent arrests have had a chilling effect on Armenian-Azerbaijani peace-building initiatives, like the EU sponsored ambitious EPNK program and increased the level of overall tension in the region . Marina Nagai, from the London-based International Alert NGO, which has worked in the field for years and is today part of the EPNK, says that “The concept and purpose of peacebuilding is often not fully understood and fraught with wrong expectations and misconceptions… this partly explains the reason why the societies and authorities might treat peacebuilding initiatives, particularly dialogue and joint activities, with suspicion and mistrust.”

When it comes to Armenia-Turkey the situation is quite ambiguous too. On the one hand the Armenian-Turkish protocols signed in 2009 seem dead, and propaganda warfare is intensified in expectation of 2015, the 100th anniversary of the Armenian Genocide. On the other hand, there are signs that Armenia-Turkey relations may be not as frozen as they seemed until recently.

On April 23 Turkish prime-minister Recep Tayyip Erdoğan made a statement, offering condolences to the “grandchildren of… Armenians who lost their lives in the context of the early twentieth century”. The rest of the statement for most part reproduced the official Turkish version of events, i.e. Armenians in 1915 were subject to “relocation” rather than genocide, therefore Armenians’ suffering was a consequence of war and “difficult times for Ottoman Empire”, just like “the suffering for Turkish, Kurdish, Arab, Armenian and millions of other Ottoman citizens”. Thus, Erdogan’s statement by no way means recognition of genocide, or even of the fact that Armenians were deliberately targeted by the Ottoman state. However, in any case Erdogan’s statement attracted a lot of attention since it is the first time a head of Turkish government has offered his condolences to Armenians in relation to the events of 1915.

On May 2, Turkish foreign minister Davutoglu published an article, elaborating on Erdogan’s message . Like Erdogan, Davutoglu, while remaining within the framework of the official Turkish position on 1915, tried to strike a conciliatory note: he acknowledged the prominent role of Armenians to the Ottoman Empire, and even mentioned some prominent Ottoman Armenians, including musician Komitas, who was one of the victims of 1915 (though he survived the exile to desert, he lost his sanity and never recovered).

Too little, too late?

For most Armenians, however, both in Armenia and in the Diaspora, these messages are “too little, too late”. Aram Hamparian, head of the Armenian National Committee of America (ANCA) called Erdogan’s statement “denial repackaged”, and Serzh Sargsyan’s chief of staff, Vigen Sargsyan, described it as “an advanced form of denial”. Refusal to acknowledge that Armenians in 1915 were subjected to deliberate extermination continues to anger Armenians, and the conciliatory tone of Turkey’s leaders is undermined by the continuing blockade of Armenia by Turkey. However, while rejecting Erdogan’s view of history, the Armenian government also was careful to include a conciliatory message: Serzh Sargsyan’s April 24 statement emphasized that “we do not consider Turkish society as our enemy”, and devoted a whole paragraph to “Turks who lent a helping hand to their Armenian neighbors”.

Commentators note that changes in the Turkish leaders’ tone may be a result of a changing Turkish strategy in expectation of 2015. While the Turkish government is not ready to recognize the events of 1915 as genocide, today, after genocide recognitions by several countries, the advent of Internet and increasing openness of the Turkish society, simply dismissing the issue as “Armenian propaganda” is no longer an option. Another reason behind Erdogan’s attempt to strike a conciliatory tone may be geopolitical. Some commentators are talking about an attempt on the part of mediators to revive the Armenia-Turkey normalization process. Conciliatory notes in both Erdogan’s and Sargsyan’s statements can be a sign that these efforts have not been completely futile.

In any case, in one respect the Armenia-Turkey relations are strikingly different from the situation around Nagorno-Karabakh. In spite of all the ups and downs of government diplomacy, civil society contacts have been steadily strengthening for several years. Armenian and Turkish NGOs have been engaged in citizen diplomacy efforts long before the Armenia-Turkey protocols, and these contacts are further expanding today. A group of Armenian journalists and NGO activists went to Turkey on April 24, where they took part in the Armenian genocide commemoration organized by liberal Turkish groups. Visits of Turkish civil society representatives to Armenia have also become routine. Marine Manucharyan, whose NGO Civic Forum is engaged in both Armenian-Turkish and Armenian-Azerbaijani reconciliation efforts, says that the two processes are very different. In the first case, in spite of some significant obstacles, there is also significant support for dialogue within the societies. But, in the second case, she says, things are more difficult: “With the recent events in Azerbaijan, we are afraid that there will be no people left who would be willing to cooperate with us”.