Armenians of Kessab: Hostages of the Civil War 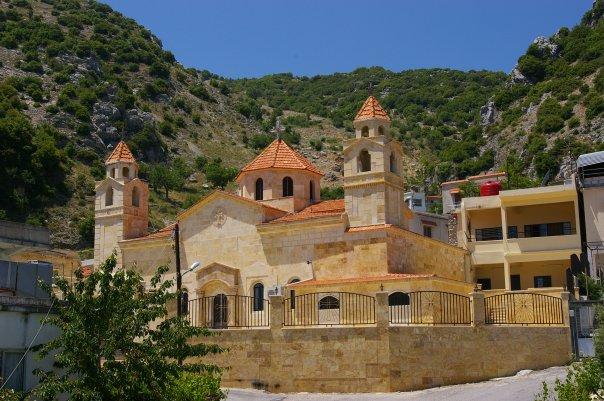 The small Armenian-populated town Kessab in north-western Syria found itself in the middle of a battle since the end of March. 99 Years after the Genocide the Plight of Syria’s Armenians Stirs Memories of 1915

The small Armenian-populated town Kessab (Kassab) in north-western Syria found itself in the middle of a battle since the end of March. As Syrian opposition fighters, allegedly supported by Turkey and including militant Islamist groups, entered Kessab, several thousand Armenians living in the town were forced to leave their homes and look for refuge from the fighting in the nearby Latakia, a major city under government forces control. Several elder people, unable to move to Latakia, were transferred to the village Vakif, the only Armenian-populated village in Turkey today. The town they left has become a battlefield for fierce fighting between Assad’s forces and the opposition.

A global campaign supported by Armenians worldwide, under the hashtag #SaveKesab helped to draw attention to the plight of Kessab’s Armenians. US State Department and Russian Foreign Ministry, in a rare case of agreement, both expressed concern over developments in Kessab. Unfortunately, the legitimate concern about the Kessab's population became a subject of media manipulations: unchecked reports, according to which 80 Armenians had been murdered, flooded online media and social networks, even though both Kessab’s mayor and later Armenian government sources issued statements refuting these rumours.

As journalist Gegham Vardanyan  sums up, reports of civilian deaths, based either on unchecked information or on outright fraud, were multiplied by yellow press outlets looking for publicity, and were further manipulated by various political actors.

While the reports of massacre, fortunately, were proved wrong, the fighting in Kessab did result in the destruction of a well-established community, members of which lost their ancestral homes. The plight of Kessab Armenians can serve as a metaphor for the fate of Syrian Armenian community in general. Once more than 80 000 strong, this was one the most thriving Armenian communities in the Middle East. Today Armenians of Syria are hostages of bitter civil strife. Majority of Armenians have tried to avoid taking sides and stay away from the conflict.

As the spiritual leader of the majority of Middle East Armenians , Aram I, the Catholicos of Cilicia (based in Lebanon) said, “as a community, we should not associate ourselves with any given regime, political ideology or person, they are provisional…we remain attached to the supreme interests of Syria”.

However, keeping neutrality is not an easy task. Armenians, as other minority groups in Syria, have reasons to worry about some rebel groups, which follow fundamentalist ideology, and these fears are often exploited by the government camp. In any case, thousands of Armenians, including many from the largest community in Aleppo, have become refugees, either relocating within Syria, or leaving the country for Lebanon, Armenia or the Western.

There is an additional cause for Armenian worries: the support some rebel groups, particularly those with Islamist leanings, are receiving from Turkish government. Against the background of a closed Turkish-Armenian border and the continuing denialist attitude to the issue of genocide, Armenians of Syria perceive Turkey as a hostile power, bent on destroying Armenian communities in its neighborhood.

Kessab, as Swiss-based analyst Vicken Cheterian points out , has immense symbolic significance for Armenians, because it had been home to Armenian population for over a thousand years, since the times of Cilician Armenian kingdom. Many Armenians saw it as the last remaining bit of historical Western Armenia, in what is today Eastern and South-Eastern Turkey, home to millions of Armenians before 1915. Given this background, Armenians all over the world are especially sensitive to Turkey’s role in Syrian civil war in general, and in Kessab events in particular.

Harout Ekmanian, Armenian journalist from Aleppo who is currently based in Yerevan, says that the perception of Turkey’s role in Syria could have been different, if the so-called Armenian-Turkish normalization process had produced any significant outcomes and Armenia had diplomatic relations with Turkey. However, the Armenian-Turkish protocols signed in 2009 were never ratified by the sides. Armenia and Turkey remain at odds over many issues, including the issue of genocide recognition.

While many Turkish intellectuals are today publicly acknowledging that the extermination of Armenians constituted genocide, the position of state has not changed. On April 10 the US Senate Foreign Affairs Commission adopted a resolution recognizing and condemning the Armenian genocide, the Turkish government reacted sharply as it had done for decades. Most probably, Turkey will once again use its links with to the US executive government to prevent such a resolution from being passed by the Senate, as it has done in the past. Turkish position regarding relations with Armenia has also remained unchanged: closed border, no diplomatic relations, and unilateral support for Azerbaijan when it comes to Nagorno-Karabakh conflict.

Against this background, reports that Turkey backs Syrian Islamist groups have added to the concerns about Syrian Armenians’ safety. Some voices in Armenia have even been calling for sending volunteer fighters to Syria to help Armenians protect their homes, but president Serzh Sargsyan stepped in to cool passions down and said that interfering into the Syrian conflict “would have been the biggest stupidity” and Armenians should avoid becoming a side of the conflict in Syria.

Harout Ekmanian says that in this situation the Armenian government should ask the Syrian government not to use Armenian populated territories as military bases and try to establish contacts with the countries supporting Sytian opposition, in order to assure that Armenian communities are not attacked by the rebel groups. In the worst case, if none of this works, says Ekmanian, Armenia should organize transportation to Armenia of all those Armenians who would be willing to leave Syria.

While many Syrian Armenians have moved to Armenia since the beginning of the war ((about 10 000, according to some estimates), so far there has been no organized government effort to repatriate the entire Syrian Armenian community. There are several reasons for this. First of all, many Syrian Armenians are extremely reluctant to leave Syria, which they perceive as their homeland, hoping that the fighting will subside sooner or later.

Syrian Armenians, who trace their origins to historical Western Armenia, rather than the territories which are part of the Republic of Armenia today, speak a dialect distinct from Eastern Armenian spoken in Yerevan, and have other cultural differences from “Hayastantsi” Armenians (i.e. Armenians living in the Republic of Armenia). While these differences can be overcome, as previous waves of Diaspora repatriation have shown, a more significant obstacle is Armenia’s economy.

Since 2008 Armenian economy has been going through hard times, and even many “Hayastantsi” Armenians are today looking for work abroad, mostly in Russia. Thus, Armenia has neither job opportunities, nor the funds for financial aid, which could help to resettle Syrian Armenians. Government inefficiency and corruption are further complicating the situation.

The Syrian Armenians who moved to Yerevan have the same bread and butter issues as the locals, says Ekmanian, but they also suffer from material and psychological consequences of war. In any case, they are trying to integrate: some of them found jobs here, some are even using the savings they managed to bring with them to start a business.

Syrian Armenians who had relocated to Armenia in the past are now helping the recent newcomers to adjust. Some Syrian Armenians see Yerevan as a temporary shelter and are planning either to return to Syria, when things calm down, or move further to the West. But many see Armenia as their homeland and are not planning to go anywhere.

Vrezh, 23, who works as a cook in a small family restaurant, says that, whatever happens, he is planning to stay in Armenia. “Of course, I miss Syria and I am worried about how things will work out there” he adds, “but our future is here, in Armenia”.