Welcome among Armenians in Lebanon 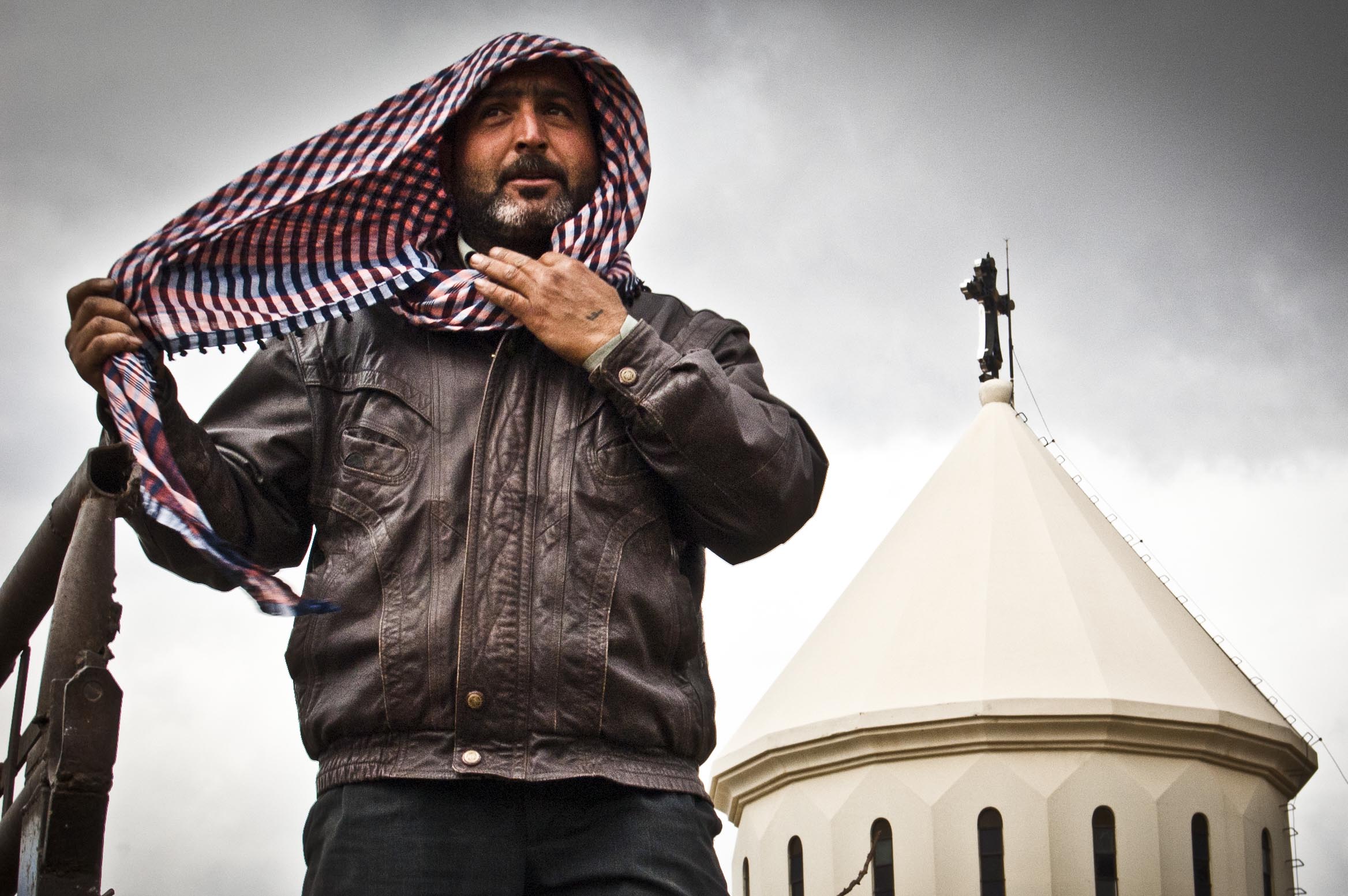 In the Bekaa valley, in Lebanon, in the company of Hrayer, a boy from the local Armenian community. Among fruit trees, vegetables and a tragic past. The first episode of the report “From the Caucasus to Beirut”

Hrayer slits the darkness step by step, trusting sporadic clues on the ground. Sudden rays of light cross the snowy cap of Mount Lebanon, calling the new day. “We’re there, better not to get too close to the border”. The big boy sinks into the gravel, settling down for a break. The hand reaching towards South points at a pass, already cleared up of the aurora about to conquer this side of the sky. “If you keep going along the ridge, and pass that saddle, you’re in Syria”. The word leaves behind a trail of silence.

The Turks made two mistakes.

The first was to kill almost all Armenians.

The second was to not kill them all.

Under the pan, straw is burning like gasoline, with no smoke. The water is already boiling. “A few months ago, I would have gone with you up to that point and over, but now the border is a minefield”. While Hrayer pours the tea, a crackling of stones and hoofs anticipates two horse riders, coming down the side of the mountain. Hrayer offers them a cup, but they just raise their arms without stopping, rolling down towards the valley. “Smugglers?”. It is the first word I have uttered since waking up. Hrayer blows on the steam, while his head nods.

Down the valley, a morning SUV’s window spreads the triumphant atmospheres of Aram Khachaturian, the Armenian composer who enchanted Stalin, lifting the space between us and Anjar, the village from which we left in the middle of the night. Hrayer smiles, while daybreak bursts into a flood of light that gives the Bekaa valley back the colours of its plantations. We finally savour our sweet tea. “Welcome among the Lebanon Armenians”.

I have lived in Beirut for almost a year now. Time is running out. Again, Rafi tells me that my interest in the Armenian diaspora will lead me nowhere. “Of us Lebanese Armenians what you will soon hear is what has always been said about all Armenians throughout history: they came, they built schools and churches – then they left”. To justify the decay of the present, Rafi sinks his fingers in history’s wounds: “Look at Ani. The millennial capital of an immeasurable Armenian empire is now forgotten, in a corner on Turkish soil, left to wind and rocks. We Middle-Eastern Armenians are sinking just like Ani”. Rafi’s shoe factory has not produced at full stretch for too long; hanging from the wall are bent pictures from the early ‘70s, when the Lebanese civil war was a nightmare that could still be put off. Amongst his employees, two Shiite workers, a Sunnite turner, a Kurdish shoemaker, two Syrian hand labourers and an old Maronite tailor: not even an Armenian, even though production is in the heart of Burj Hammoud, the part of Beirut that for a century has been the home of the largest Armenian community in the Middle-East. In trying to dishearten me, Rafi increases my curiosity for this world that has begun its journey towards disappearance.

Stripped from the pruning, the rows of almond and apple trees put up no resistance to the unceasing wind in the valley, while in the ditches squaring the 80.000 acres of Anjar run four fingers of clear water. “They were designed by the engineers of the French army in the early ‘40s, when we were assigned this land”.

Strolling down the plots surrounding Anjar, Hrayer goes over the history of his people as if reading on each clod the memoires of generations of Armenians that worked this land before him. “Oranges and pomegranates grow better at the foot of the mount we climbed this morning, as it is less windy and the sun is warmer. This part is good for vegetables, vegetables always need a lot of water”. Crouching over the edge of a cement compound, Hrayer drinks from his full hands. 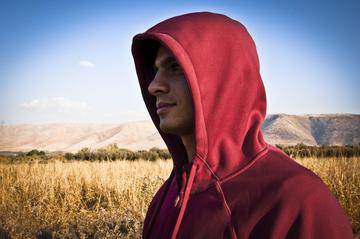 Hrayer, my Armenian guide, in the Bekaa valley

About a century ago, while Anatolia was witnessing the Armenian genocide, in the Gulf of Alexandretta the seven Armenian villages of Musa Dagh put up an armed resistance that held its own against the Ottoman troops for a few weeks. Saved by a transiting French fleet, the survivors were able to return to their homes after four years, when in 1919 mandatory France expanded its Syrian dominions up to the Orontes river. At the break of World War II, though, Paris exchanged that region with the promise of Istanbul’s neutrality in the imminent conflict, and Musa Dagh returned under Turkish sovereignty. The compensation offered to the Armenians was a pocket-handkerchief plot in the Bekaa valley, in French mandatory Lebanon, where refugees arrived, after two months traveling, the evening of September 12th 1939, and founded Anjar.

“Tomorrow morning we are going to look for Angel, Anjar’s oldest woman”. Hrayer is toasting kefte, skewers of spicy minced meat, on the embers taken from the heart of the bonfire, while only silence comes from the darkness Bekaa has sunk into. “She can tell you about the childhood in Musa Dagh, the escape, the harsh early years in Lebanon”. At the height of over 1.000 meters, in the valley, the cold of the first two winters killed 800, one every seven, out of the 5.500 refugees arrived in 1939. “Of everything you see here”, Hrayer smiles, almost as if his eyes could penetrate the darkness, “there was nothing. The refugees scraped roots for food, and lived in tents made of rags. The Musa Dagh combatants’ resistance against the Ottoman soldiers, in 1919, was not the harshest battle for my ancestors. Bekaa’s winter was a far more lethal enemy”.

By moving to Lebanon, the destiny of the Musa Dagh refugees collided with that of the hundreds of thousands of Armenians that 20 years earlier had found refuge in the Arab Middle-East. Aleppo, Baghdad, Damascus, Amman: the list of the cities where the Armenian survivors of the genocide settled comprises the names of all Levantine capitals. Places where cosmopolitanism, language blending, a multi-religion-based society and the co-existence of various economic and social models gave the exiles wide room for integration. However, scattered across the four corners of Mesopotamia, the new-born diaspora constantly felt the calling of a place that was quickly becoming a synonymous with opportunity, work, development, citizenship, freedom: the place where the most articulate, hard-working, intrigued and largest Armenian community in the Middle-East would take shape. The place that would become mind, interpreter, spokespeople and armed wing of the whole Armenian diaspora in the world: Beirut.

In the silence of Bekaa, I jump at my mobile ringing. “It’s Rafi. Your man has accepted to meet you here at the factory tomorrow morning. He has a flight to Moscow in the early afternoon, I told him you would be here”. The lights of the truck taking me back to Beirut turn on the yellow on the flags of Hezbollah, the Shiite militia controlling the valley. The gruff beard and the turban of the leader Hassan Nasrallah, number one most wanted by Israel and United States, are at every intersection, every flyover, every lamppost, while down in the valley Beirut’s heart is already pounding with orange light. I only bid a brief farewell to Hrayer, apparently: the tracks I am following draw a trail that will soon cross his again. Meanwhile, my mind plunges into a nebula of faces, places and suggestions gathered during the months spent close to the Armenian diaspora in preparation for tomorrow morning’s meeting. I will finally put a face to the man I had been awaiting for months, Sarop the warrior has accepted an interview.