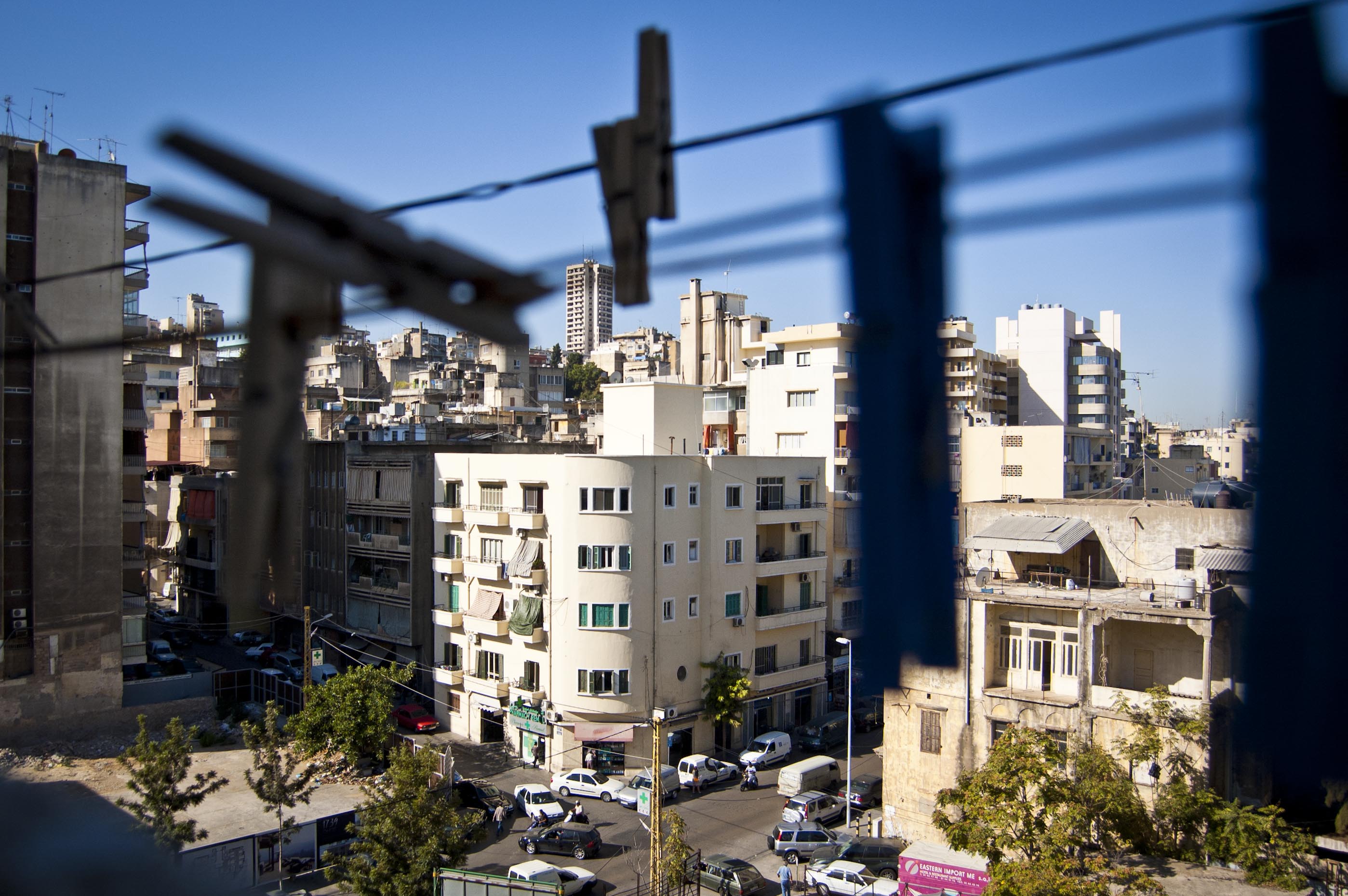 Beirut, a view on the Armenian quarters (Photo Paolo Martino)

Arafat’s bodyguard, then on the front line in the Armenian armed struggle and for 10 years a prisoner in a Syrian jail. “When I came out, everything had changed. The USSR no longer existed”. The meeting with Sarop, in Beirut’s Armenian quarter. The second episode of the report “From the Caucasus to Beirut”

Dawra wakes up while the night slips into the sea, followed by a trail of fog. Still sleepy on the sidewalks, Syrian hand laborers take part in the day labor lottery. Dawra, “the roundabout”, is the epicenter where every trip starts and ends. To the North-East, Junie, a Maronite stronghold guarding Tripoli and Syria; to the West, the highway, an aorta that chokes off in the jam of Martyrs’ Square; to the South-East, the Mountain, refuge for the mosaic of minorities that have populated Lebanon throughout the centuries. But all around, lapping the sidewalks of the roundabout, is Burj Hammoud, Beirut’s quarter where the soul of the Armenian minority nests, after having come here a century ago following a journey with no return.

you have understood Lebanon

it's because it was not explained

to you well enough”.

Sarop’s shape appears in the frame of the door to Rafi’s factory, in the backstreets of Burj Hammoud. The two old friends allow each other a long embrace, surrounded by sewing machines, presses, turns and hammers. “Ever since I’ve known him, Sarop is always in a hurry. And when he leaves, you never know when he’s going to come back. Once, in the ‘70s - Rafi smiles- he came to say goodbye to me saying he was leaving on a very short trip, just a few days. I saw him again after ten years”. Rafi has worked for weeks on organizing this meeting with Sarop. The moment for greetings and tea gives me time to go over my memories again and organize my thoughts.

In the early ‘70s, Lebanon was already a powder keg: Palestinian fighters, come out of Jordan after the Black September, moved to Lebanese land. Society struggled to hide the tension, distracted only by the economic boom and desire for normality. In this climate, also the Armenian community, on its third generation and comprising as many as 300.000-member, started developing political demands, first and foremost the recognition from the International community of the genocide inflicted by the Ottoman government sixty years earlier.

The encounter with the Palestinian armed movements served as a catalyst. On October 14th, 1974, Yasser Arafat gave his first speech at the UN with the holster on his belt: thanks to the armed struggle, the Palestinian issue was now part of the worldwide agenda. For some Armenians, the way to obtain equal visibility had been paved. At noon on October 22nd, 1975, the Turkish Ambassador Danis Tunaligil was murdered. The assassination, whose responsibility was claimed by the Armenian Secret Army for the Liberation of Armenia, gave way to a decade of repeated armed attacks on Ankara's diplomatic staff, Turkish air lines, representation seats of Turkey and its allies. Operations caused victims in France, Italy, Belgium, Switzerland, Greece, USA, Iran and Turkey and were planned in Beirut, which had in the meantime sunk into the vortex of civil war.

“Why did you choose the armed struggle?”. In Rafi’s office time runs fast, there is no way to dodge around the issue. “What did you say your name was?” Sarop answers with a question. “Paolo”. He stares at me. “You know, Paolo, I saw many like you, years ago, coming to Beirut with their pencil and notebook to interview, study, understand the war. After a few weeks, I would see them going around with a machine gun on their shoulder and their war name, enlisted in this or that other militia”. He pauses. “War only speaks one language. If you want to survive, you learn it”. Middle-aged, Sarop has the tone and the look of a fully self-confident man.

“What started your armed struggle?” On his face, a melancholic smile. “Without the Palestinian revolution, nothing would have happened. Even the name I bear, it was given to me by Yasser Arafat. One day, he told me ‘We Palestinians are fighting so history does not forget us like it has done you Armenians’. So I understood we had to put up an armed struggle too”. For a few years, Sarop served as Arafat’s personal bodyguard, until the Palestinian leader was forced to flee Lebanon because of the Israeli occupation. Soon after, the world witnessed the massacres in the Palestinian refugee camps of Sabra and Chatila by the Christian phalangist militias, who had often used their arms against the Armenians as well.

“In September 1979, about 200 Armenians were lined up in front of a wall and shot to death. The phalangists did not tolerate that in this Country there were Christians who did not follow their orders”. Only three years earlier, right outside Burj Hammoud, 4.000 Palestinians were slaughtered in the siege of the Tall Zatar refugee camp and in the Karantina massacre. Rivers of blood ran across the perimeter of the Armenians quarter. “But our dead were avenged and if their number was not too high, it was thanks to our secret armed organizations”.

Sarop played a leading role and was a witness in this story only until 1980. He was then the victim of an attack that kneecapped him, and was taken to Romania to get treatment. Here, in the shadow of the Soviet godfather, Syrian agents approached him to have his collaboration, given the huge interests Damascus exercised on Lebanon. With his refusal, he was doomed. “I spent ten years in a Syrian prison and when I came out, nothing was the same. The USSR no longer existed, Armenia was a free Country, the war in Lebanon had come to an end. In the Palestinian camps, Marx and Lenin’s portraits had been replaced with the verses of the Qur’an. And the revolution had died”.

“Do you still believe that killing Turkish diplomats was justified?”. Sarop checks his watch. “Until 1915, my family used to live in a large farm. My grandfather, surviving the genocide, ate sand in the Iraqi desert during the deportation before finding himself in a filthy shed in Beirut”. The pace of his voice speeds up: “But nobody cried for those tragedies then. I’m sure not going to cry the death of Turkish officials today. Armed struggle, right or wrong, is now over, anyway. And we obtained a lot. Many Countries have recognized the genocide and others will. However – Sarop is already standing up – the souls of the hundreds of thousands of victims of the genocide are still marching in lines on the Anatolian plateaus, awaiting justice. I swore I would never walk that land as long as it is occupied by the Turks, but you are free to go there. Go, you will still find the dead souls.”

Sarop comes out of the office annoyed for having to prove the moral legitimacy of his armed group’s operations. In war, indeed, one principle stands, by which the end justifies the means. As for the ongoing uprising in Syria, he himself admitted: “I hold strong resentment towards the Assad dynasty, it owes me ten years of my life. But in this moment, its regime is the only one that can protect the Armenian minority in Syria. Until alternatives are found, it is good for the situation not to evolve”. Victims and murderers hold hands.

Rafi takes me back through the streets of Burj Hammoud. Signs, road signs, merchants screaming: all in Armenian, as if to tie again a knot to the thread of continuity between this community and its origins, a thread that history cut off a century ago. Plaster coming off the walls reveals hails of bullets that riddled the quarter in 20 years of civil war, even though the Armenians had declared their neutrality right from the beginning. “Rafi, did you believe in the armed fighting too?” The alleys finally open on Dawra and all of a sudden Rafi stops: “Right in this spot, there was a small market where they sold Kalashnikovs and grenades. On that street” he points at one of Dawra’s tangents, “my brother was killed by a bomb. Sarop was shot by a running car in front of those bar tables. He made it thanks to his bodyguard’s sacrifice. You understand what Sarop meant when he said that war only speaks one language?”

The taxi is leaving Dawra, where history has left the story melting with the present. My thoughts are on the challenge Sarop cast when he left: “The ghosts of my people still roam in the wind of the Anatolian plateau. Go, you will still find them there”.