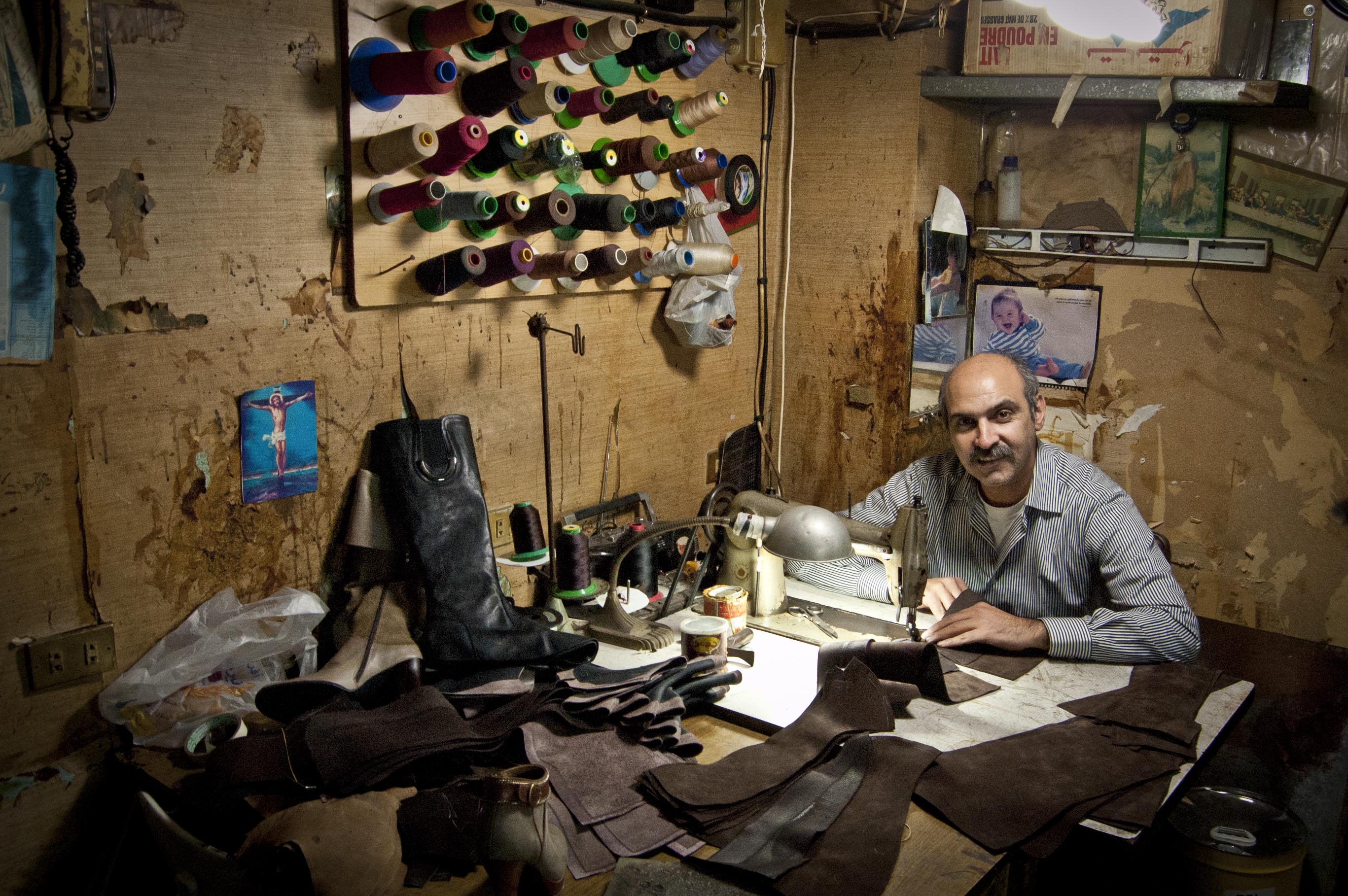 Professor Adakessian’s slow pacing up and down the halls of the Armenian University of Haigazian, Rafi and his shoe factory in centre city Beirut, the present that shows up again in the old pictures of the Pobeda, the Russian ship that carried thousands of Armenians from the Lebanon to Soviet Armenia. The third episode of the story “From the Caucasus to Beirut”

“It is not collective memory, language or culture, that keeps an exiled people alive”. The cafeteria on the second floor of the Armenian Haigazian University, on the central Rue Hamra in Beirut, is soaked in sun. “A people unhooked from geography only survives if it can replace the founding myth of origins with a mirror one: the myth of the return”. Professor Adakessian speaks slowly, to allow me to take notes while we are having lunch. “So do not ask me if I truly believe that one day I will return with my people to Western Armenia, my land. As the other Lebanese Armenians, I already am on my land. However, that myth is essential in defining our identity: it reminds us of where we come from”.

After 1915, while the survivors of the Armenian genocide were settling down in the Arab Middle-East, Lebanon spread its fame of Switzerland of the Mediterranean. Beirut was becoming the natural outlet for activities for which Armenians traditionally stood out. Armenian shoemakers, tailors, upholsterers, watchmakers, goldsmiths, blacksmiths and printers enriched Beirut’s flourishing economy. Across one generation, after overcoming the survival phase, the domestic demand for culture, research and knowledge-sharing led to the founding of the Haigazian University in 1955, the only Armenian university of the whole diaspora.

“Until the dissolution of the USSR and Armenian Independence in 1991 – states Adakessian, Professor of history of Armenian political thought – Beirut was the only arena where our community could express itself freely, define objectives, strategies. Even though Lebanese democracy was limping, Armenians were able to found political parties, unions, intellectual circles, interest groups: the mind of the whole Armenian community was here. Unfortunately, this did not spare our people big mistakes and suffering”. From the window at his back, the façade of the adjacent building bears the signs of fierce gun fighting.

Armenian refugee camp, Aleppo, 1917. Armenian shelter, Tyre, 1917. Armenian shacks, Beirut, 1918. Strolling through the library’s silent halls, Adakessian translates the captions from the pictures hanging on the wall, among long shelves where thousands of Armenian books lay among French, English and Arabic volumes. The pictures tell the stories of a miserable humanity, ghosts roaming bare shacks. A woman dressed in black takes out from the wash basket just one shapeless piece of cloth, while a boy sits naked beside her. “They were the luckiest. Most of them didn’t make it, killed by thirst in Syria’s deserts or by the Ottoman soldiers during deportations.

I am left alone in the reading room, where lancet windows chase each other along the walls and sunset saturates the air with warm light. Flipping through the photo books, I find traces of the stories I have gathered till now. The Musa Dagh Armenian refugees setting up a tent city in Anjar in 1939. A new school opening in Burj Hammoud in 1927. An Israeli patrol going around the Dawra area in 1982. A particular image catches my attention. Entire families with suitcases in line on a pier. The caption in English reads: “Pobeda sailing, 1948. The ship carries thousands of Lebanese Armenians to Soviet Armenia”. Migrations adding up to other migrations, seeking a future that is so hard to grasp.

There is an invisible thread in the history of this people pulling tight between the Middle-East and the mountains of the Caucasus. It connects Beirut’s sweltering coastline to Yerevan’s avenues lined with trees, crossing the Syrian Sahel and the Hatay hills, sweeping Anatolia’s plateau to the North-East, brushing against the foot of the Ararat. In this library, refuge for a culture that endures in exile, I get the feeling that the categories of history and geography do not walk the same line, but in this case, symbolism, especially that of the return, carries greater weight in the annals than do dates, places, testimonies. Exploring that region would mean going deep into beliefs even before geography, into the myth even before history. Into nostalgia before memories.

Late October days go by slowly among Burj Hammoud’s alleys. The shoe factory, and the so many anecdotes Rafi tells me, fill the afternoons that are getting shorter by the day, while worrying news travels from neighbouring Syria. “The Syrian Spring is going to turn into a civil war. And Armenians are going to be stuck in the middle, as in Lebanon 30 years ago”. Rafi quickly moves the pieces on the board of the backgammon, the most widespread pastime. “But you made it out alright, in Lebanon”. My turn to move. “Well, we immediately chose neutrality and self-defense. ‘Work during the day and be on guard during the night’, that was our slogan. But do not forget one thing”. Dice fly. “At the time we had a protector to whom it was difficult to say no, for anybody”. In just one move, Rafi settles the game. “The Soviet Union”.

In 1979, right in the middle of the civil war, the Christian front suffered internal fractures. In search of new alliances, the Phalanges knocked at the door of the Armenians. “They wanted to use Burj Hammoud as an ammunition storage house, because it was the only area that was still neutral”. When the Armenians refused, the militias barricaded the quarter’s exits with their tanks, threatening a rain of grenades. “But their leader Bashir Gemayel received a call from Andrey Kolotosha, the Soviet Ambassador”. It was passed down that the diplomat only uttered one sentence to Gemayel, without waiting for an answer: if you do not wish to turn the tide of your war, leave Burj Hammoud. “The morning after, the siege was over. But who – Rafi asks me while setting the pieces for another game – who would lift a finger for Syria’s Armenians today?”

The road from Beirut glides down on the Bekaa valley after the descent from Mount Lebanon. In Anjar, the small Armenian village on the plateau, 3.000 people await a winter that is looking tense. “The Syrian army has already trespassed in this area more than once, chasing the rebels that seek refuge on Lebanese land”. Hrayer, the guide that has accompanied me through the valley for months, speaks while looking at the Anti-Lebanon, the thin mountain ridge that divides his village from Syria. “Let’s not waste time, someone is waiting for us, as I had promised”.

At 93 years of age, Angel is Anjar’s oldest citizen. A lifetime of roaming. “I was born in Port Said, where the Musa Dagh refugees arrived in 1915 to escape from the Ottoman soldiers”: the Musa Dagh region, composed of seven Armenian villages on the rises of Antakya, was able to resist the troops of the Sublime Porte for over a month, inspiring Franz Verfel’s 1933 novel The Forty Days of Musa Dagh. “When I was one, we came back home, because the French had reached Musa Dagh and threw out the Turks. But then the Turks came back 20 years later and we fled again, this time to Lebanon”.

I ask Angel who she shares her apartment with, and her eyes turn watery: “I am alone. My children are married and my sister Vartuhi left for Armenia over 60 years ago. I remember the day I went with her to Beirut Port as if it were yesterday”. I interrupt her: “Did she leave on board a Russian ship?”. Angel looks at me with curiosity: “Yes, the Pobeda”. My thoughts go back to the picture I had seen a few days earlier at the library. An invisible thread binding places and destinies so distant from each other transforms into an ever more obvious trace. Vartuhi could be one of the people immortalized in 1948, one among the many children in line waiting to board. “Angel”, I ask on impulse, “do you have Vartuhi’s address, by any chance?”