The Armenians of Musa Dagh 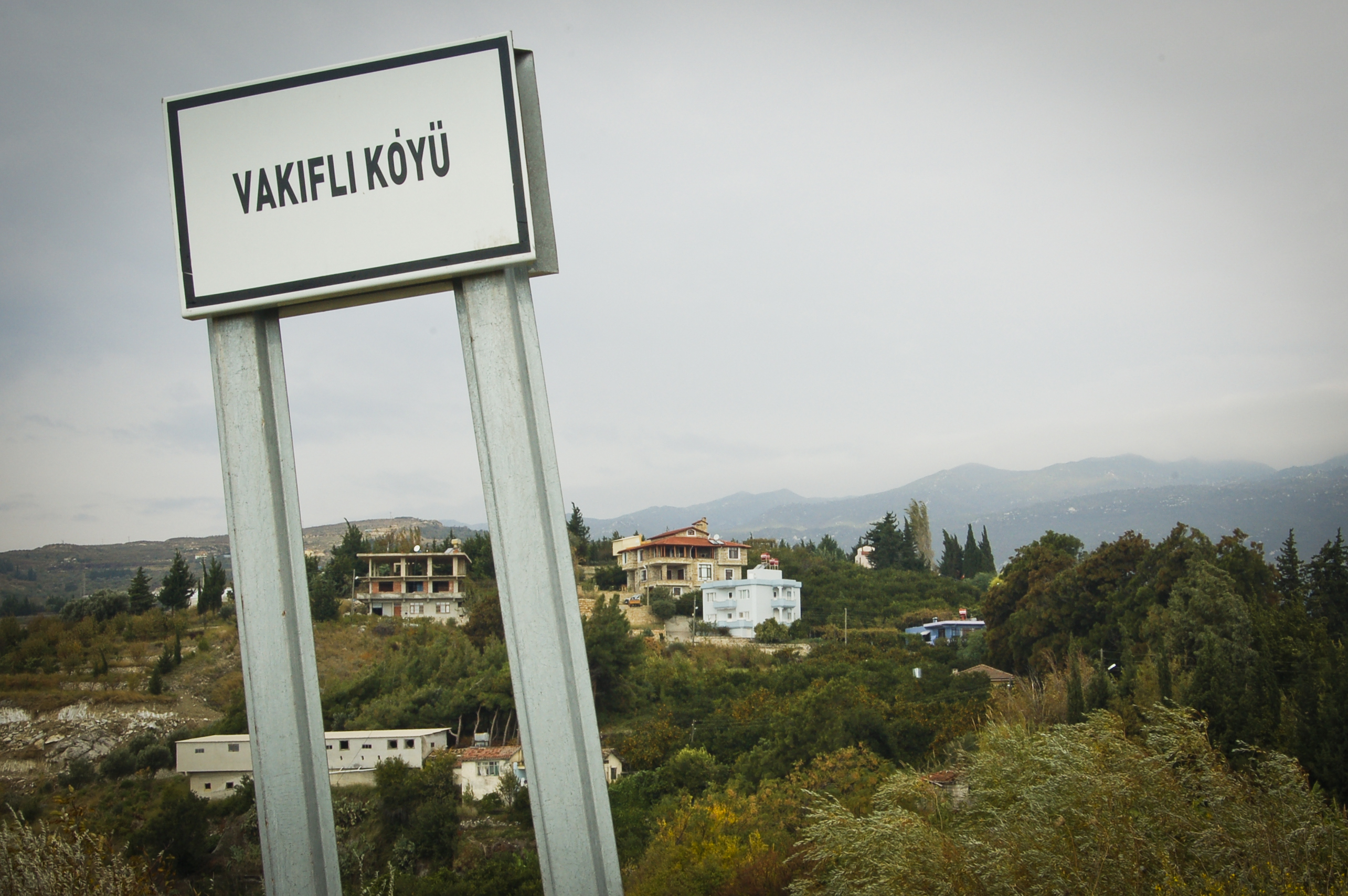 An Armenian, a Syrian and a Turk are playing cards in the only inn in town. The three eldersliven up an empty room with ritual jokes, amidst the vapor of coffee. Each of their lives is asynthesis of individual and collective stories gone bad, forsaken like this place. The tenth episode of the story “From the Caucasus to Beirut”

The reflection of the orange light saturates the room, giving the nightmares the stylized shapeof the shadows surrounding me. An encrusted sink, sinuous in old-fashioned shapes; the siphonhanging on the wall, damp with carelessness; a formica clothes stand, shiny from wear. Themagnificence of an ancient Middle-Eastern capital implodes in the torment of a sleepless hotel fortruckers and wheeler-dealers. Rise soon, sun: put out this nauseating reflection of the light on thewalls, kill solitude, finally tell me if your day will or will not see my journey continue to Syria.

Antioch, a handful of kilometers North of the Turkish-Syrian border. The Orontes river, a watertongue born from the perennial snows of Mount Lebanon, cuts a luxurious city in half. Ancientbazaars for centuries swarming with the same euphoric wish for small business; restaurantsinvading the streets till late at night; Roman capitals and columns integrated in the geometry ofan aesthetic Islam. The Syrian civil war is only a half hour-drive away, but on the festive riversidein Antioch, a city Ankara snatched away from Damascus only 70 years ago, no one seems to mind.Waiters take orders in Arabic, renewing the perfect bilingualism of this young corner of Turkey.

Thursday morning. November is almost over, while the Syrian revolution is already eight monthsold. The United Nations have announced yet another ultimatum which (disregarded) will befollowed by yet other sanctions. Just like every Friday, at the end of the most awaited prayer ofthe week, Syrians will carry out a mass demonstration howling with rage against the 40 year-old autocracy of the Assad dynasty. The hundred thousand Armenians populating the Country, aminority amongst minorities, children of the orphans of the genocide, will look out their windowsin Aleppo and Damascus: they will witness the rush of rage fill the streets, in the land that hasgenerously given them shelter for a hundred years.

Everything is ready to cross the border. On the memory card in my camera now I only have thepictures that any tourist with my visas on their passport would have shot: Caucasian sunsets,snowy mountain tops, children smiling, flocks pasturing. The other pictures, transferred on a DVD,are already in Istanbul, along with the rest of the material: notes, clippings, drawings, maps, lifestories. Again, I go over the itinerary from Armenia to the Turkish-Syrian border ad nauseam: foreach leg of the journey, I make up a subject: for each stop, an anecdote; for each detail, a lie…so that, if asked, the month-long journey I am leaving behind will appear to the Syrian customsofficers to only be an insignificant whim of a solitary tourist on a trip out of season.

I know how I mean to die -
not on the road to Deir ez Zor,
not amid the filth of the deportation camp.
No! I mean to die on the threshold
of my own house, with a gun in my hand.

The Orontes invades the sea with its full spate force, flooding the floor of the Mediterranean withmud. These shores, beat by the same wind blowing on Beirut during rainy autumn afternoons,mark the last leg of the journey before the most treacherous border. Amidst the mountainscovered with a blanket of pine trees and closely chasing the coast, a village of about ten souls hasbeen renewing its same patient life every day for centuries. A handful of farmers and shepherds’houses, gone unarmed through a violent history, is the connection of a memory flow thatoriginates in the Armenian villages of the Bekaa in Lebanon and lands in the suburbs of Yerevan, inArmenia. It is Vakif, the last Armenian village of Turkey.

An aluminum sign swings squeaking on thin stands of steel. “Vakifli koyü, Hosgeldiniz”. Welcometo Vakif. The road winding along the slopes of Musa Dagh, the Mountain of the Muses, stageto the most memorable episode of the Armenian resistance against the Ottoman Troops, iscontinuously beat by the wind. Along with five other villages in the valley, Vakif is an importantpage in history for the battle that on these very mountains saw a small group of Armenian civiliansoppose the soldiers for forty days. The soldiers had come to deport them. The civilians were finallysighted from the sea by a French ship: at the end of their strength, the combatants fled bringingto safety only a red cross sewn on a piece of white cloth that made them visible from the sea.It was 1915. Today that flag is in the Bekaa valley, in Lebanon, guarded in a glass shrine by thedescendants of the Musa Dagh heroes, along with the pride of a gallant descent.

The slow walk climbing up to Vakif gives me time to compare the ground with the maps of thebattle that I collected at the Musa Dagh museum in the suburbs of Yerevan. Red arrows indicatethe directions of the army attacks; black arrows in the opposite direction, even in number, markthe withdrawals. In the end, eighteen Armenians died. The eighteen martyrs of Musa Dagh.History has kept no trace of how many casualties were among the regular troops. What is knownhistory, though, is that the refugees found shelter in Port Said, Egypt. The adult men enrolled in avoluntary battalion employed in the campaign to conquer the Ottoman provinces of the MiddleEast. By 1917, the conquering of Syria was complete, and the refugees of Musa Dagh were able toleave the Egyptian tent city to return to the shades of these flourishing woods.

The grating around the Armenian Church in Vakif is locked. The silence is broken only by the blowsof a salty wind. A gentleman, torn between curiosity and indifference, is slowly coming closer.I finish reading the inscription telling the rest of the story. In 1939, during World War II, Franceobtained neutrality from Ankara giving up this land to Turkey. The Armenians of Musa Dagh lefteverything again, this time to move to Lebanon. All of them, except for some: a group remained,giving continuity to a very ancient human presence, to which this small church bears witness. Inthe meantime, the gentleman has overcome his fear. Two huge black eyes look closely at me. Hishand up to his mouth, a very eloquent gesture. “Coffee?”

An Armenian, a Syrian and a Turk are playing cards in the only inn in town. The three eldersliven up an empty room with ritual jokes, amidst the vapor of coffee. Each of their lives is asynthesis of individual and collective stories gone bad, forsaken like this place. The Armenian, adescendant of the survivors of Musa Dagh, was an emigrant to Germany for forty years as a Turk,like millions of other Turks. The Syrian was forced to become a Turkish citizen in 1939, when thisland switched sides. The Turk is the son of merchants who, prior to the fall of the Ottoman empire,lived in Greece, on the Aegean Sea. He settled here because of re-population policies by whichthe repatriated Turks were assigned Armenian houses left empty. How much history around onetable? How much of neglected memory dies in these old men? I come out of the inn and lookdown the valley. The border is down there, splitting this clear view in two.

The Syrian customs officer touches his moustache while shaking his head. Illuminated by a milkyneon, the passport lies open on his table. It has been lying there for hours, now, among piles ofbullets that two soldiers are patiently inserting in the chargers. “Sometimes, faxes take the wholenight, to get here. If I were you, I would give up”. The waiting room is empty: up until a few weeksago, it was crowded with people and goods. Today, silence rules. Finally, a policeman brings apiece of paper from upstairs.

I write to keep busy, to avoid meeting the sharp gaze of the young officer on duty. Tidy, clean-shaven, very short hair. Uniform ironed. He must be my same age, but he seems to belong toanother world. I know the fax is a farce, I know he is the one who makes the decisions, aroundhere. And I know that he will never let me pass. His is the thin face of a power feeling threatenedand who now recognizes and speaks with his fellow officers only.

“Italian? I’m sorry, you can’t cross here”. The clock marks 1 in the morning. I walk backwards andretrace the stretch of sky towering over the no man’s land. Stars big as nuts carefully watch overmy path. While announcing the end of my journey, the officer never took his eyes off a Turkishsoap opera on the colorless monitor of his small television.