After 10 years of violence, bombings, terrorist attacks, the fire in Syria has ceased, but human suffering is not over yet. There are still millions of people living as refugees. Some of these people, who have lost everything, dream of returning to Syria, some are settling elsewhere

A new life in Armenia

Raffi and Yoland Rshtunis are of Armenian descent, but were born and raised in Syria. The couple, who used to come to Armenia as tourists, moved to that country in 2012 for another purpose, trying to save their own lives. They fled the Syrian war, which began in 2011. On March 15 of that year, the Syrians took to the streets demanding democracy and freedom, but instead got a war and a country buried in ruins. Peaceful demonstrations within months turned into an armed conflict, leaving thousands destitute.

“When the war broke out in Syria, our daughter went to school, she was 17 years old. This school began to be bombed. We decided that we needed to leave. In Armenia, for people like us, refugees from Syria, university studies are free. Thus our children got their higher education already here”, Raffi says.

In Aleppo, Raffi had his own plastics manufacturing factory. As a result of the bombing, the factory was completely destroyed, and subsequently everything that was in the warehouses was plundered by looters. Both the house and the cars remained in Aleppo. Raffi estimates all this property at 500,000 dollars. But now, he says, it could be sold for only 150,000.

“Our house in Syria was only 9 km away from the airport. But it took us hours to get there. There was a bombing that day. I already thought we would not catch the plane. But we caught it. I will never forget the day the plane landed in Yerevan. As we went to the airport lounge, reporters were waiting for us with flowers and a sign reading “Welcome Home.” At that moment we realised that we were home, we were safe”, says Yoland.

“During the 1915 Genocide, our family somehow survived and settled in Syria. I am a child of a refugee family: then I became a refugee myself”, tells Rafi.

The couple lived in Armenia as tourists for a year, thinking that life in Syria would be peaceful and they would be able to return. When they realised that their plans could not become reality, they thought about establishing permanent residence in Armenia.

In 2014, Yoland took cooking classes and is now a much-needed pastry chef. Her husband also helps make pastry molds. They say the family business is booming. Both the state and private and international companies helped them get back on their feet. They also extended a helping hand to refugees like them.

In Armenia, Yoland has created a non-governmental organisation that is engaged in helping refugees from Syria like them.

“In total, about 12,000 people came to Armenia from Syria. However, most of them later moved to other countries, in Europe and the United States. Today there are about 5,000 refugees in Armenia. The fate of our family is well settled, but there are people who are still burdened by the war”, Yoland says.

“It was 2015 when I left Aleppo. The war had worn me out. I came to Armenia, but stayed there for a short time, then moved to Artsakh, Nagorno Karabakh. The state helped me. I got a house, a land plot... Little by little I got to my feet. I was satisfied and happy. I managed to survive”, says my interlocutor, a middle-aged man who did not wish to disclose his personal information. He says he does not want those who know him to know him as “homeless” now.

My interlocutor mentions that he had a house in Aleppo and his own art studio. He lived a peaceful life, dreaming of starting a family.

“My dream in Syria remained unfulfilled. Previously, I was only in Armenia as a tourist, I hadn’t been in Artsakh, I did not know much about it. When I came to Artsakh, I lived in the environment of these people, I fell in love with this country and people. I was very warmly welcomed. And I decided that I would start a family here, my children would grow up in this land”.

However, September 27, 2020 shattered this man’s dream again. On that day, a war broke out between Nagorno Karabakh and Azerbaijan, which lasted 44 days.

“I was in Yerevan that day, I was a guest. At 7:10 in the morning, I received the first news from Artsakh that Azerbaijan had launched an air and missile attack. I went back quickly. I understood on the spot that this was not a fight for one or two days, this was a large-scale war… Do you know that war smells? The smell I felt in Syria had just left my body when I started breathing it again...”. 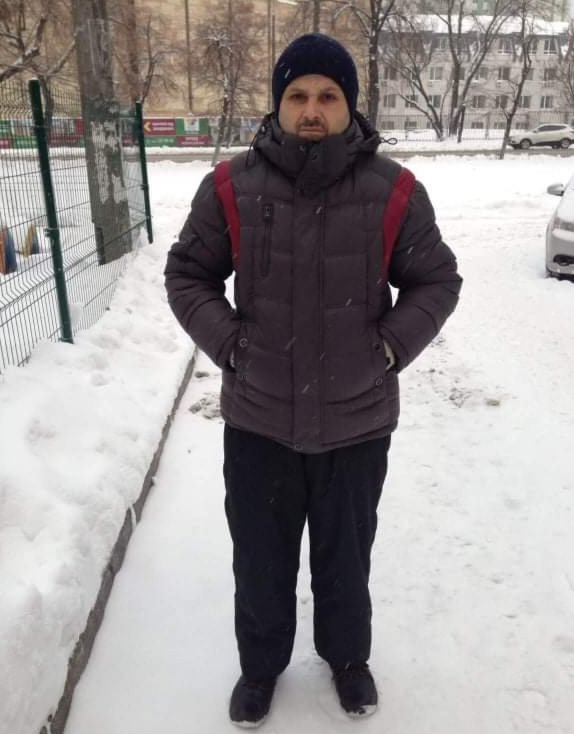 My interlocutor did not just feel the smell of war again, but also experienced the pain of loss again. “My friends died...”. He cannot talk about this topic too much. The wound is still fresh.

He lost his house as well, which was located in one of the villages now under the control of Azerbaijan. Despite everything he did not leave Nagorno Karabakh. He settled temporarily in one of the districts there, in Martakert.

He says it is hard, but he is sure that he will get to his feet again, build a house, and have a family.

“I lived in Lviv at a young age. I was a student there. Those were wonderful times”, recalls Syrian Ahmad Abdou, 52, who lives the next stage of life in Ukraine, this time in the capital Kiev.

If the man came to study in that country before, now he has to live here. He is a refugee. He left Syria in 2013.

“There was war there, and I was seeking peace. I came to Ukraine because I knew the country. I thought it would be easier to adapt here, and then thought it was temporary, but I came and stayed... At that moment, when I left there, I was leaving the earnings of my years - home, prosperous life, work...”.

Ahmad is an engineer. He worked as a chief engineer for 17 years and is currently unemployed.

“I cannot find a job; I have a document problem at the moment. The paper from the local migration service does not help me, I cannot find a permanent job, and travelling is a problem”.

Ahmad lives in a rented house today. Buying his own apartment seems like an unattainable dream. From time to time he thinks about returning to Syria. He says his desire is great, but he does not take that step today, because life in Syria is not settled yet.

“I have to start from scratch there as well. I lost everything I had. And there are many problems there now, the economy is not in good condition, there are a lot of issues”.

The future is unknown for him. He says he has entered a stage where he does not even know what will happen next. As the years go by, it becomes more and more difficult to create something new.

“If I went to Europe, I think it would be easier to arrange my life. I know that after living in Germany for 8 years, the issue of citizenship is solved, but in this country the rules are different. I have been here for 9 years, now I am only thinking about getting citizenship so that we can get back on our feet. I have no other dream, the years go by, my life wears out...”.

As a result of the ten-year war, a number of cities in Syria have been reduced to rubble; the country's economy has collapsed. About 6.5 million people have become refugees.