War in Ukraine: reactions from the South Caucasus 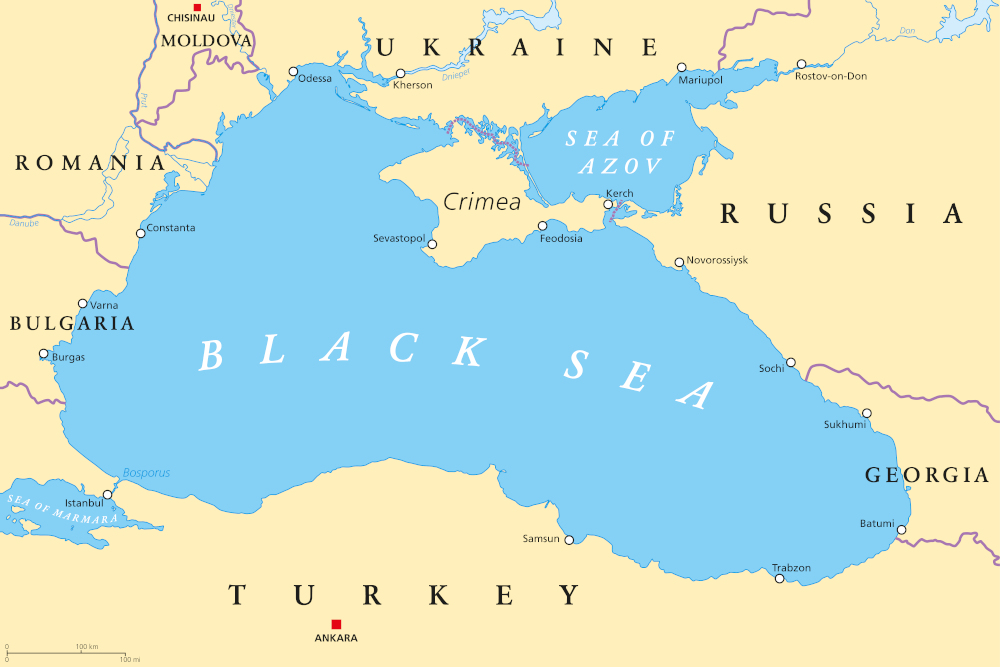 A map of the Black Sea - © Peter Hermes Furian/Shutterstock

If the secessionists of Abkhazia and South Ossetia celebrate the Russian recognition of Donetsk and Lugansk, Georgia reaffirms the integrity of Ukraine, while Armenia finds itself in a difficult situation as an ally of Moscow but with good relations with Kiev. Azerbaijan, on the other hand, coordinates with Turkey

The secessionists of Abkhazia and South Ossetia, historically supported by Russia, celebrated the recognition of Donetsk and Lugansk. On 23 February, the "Day of the Defender of the Fatherland" was celebrated, as in Russia. On this occasion, Abkhazian President Bzhania made a short public speech while South Ossetian President Bibilov attended a ceremony during which he reiterated all the accusations made by Russian President Vladimir Putin against NATO.

South Ossetia had already recognised the two Ukrainian breakaway areas in 2014 and Abkhazia did it recently. In addition to political support, South Ossetia has made itself available to host the orphans of the conflict and has put its defence on alert. Bibilov had a series of meetings with the Minister of Defence of South Ossetia in relation to the Ukrainian crisis to verify the state of the forces and means of defence, military equipment, weapons, personnel as well as the willingness to respond to possible provocations from Georgia, should regional tension spread.

A first group of 51 refugees from the "Lugansk People's Republic" was evacuated to the Russian Federation today and a transfer is planned to Abkhazia. According to reports from local authorities, "Abkhazian Emergency Minister" Lev Kvitsinia personally supervised the transfer from Lugansk. About a hundred refugees are expected to arrive.

In addition to political support, therefore, South Ossetia and Abkhazia will provide active assistance in favour of the invasion.

The recognition of Donetsk and Lugansk was received very differently in Tbilisi. In recent days, many have drawn a parallel between war and Russian recognition of secessionist areas in Georgia in 2008 and what is happening in Ukraine. If it is true that there are common elements, that is military coercion and political recognition, it is equally true that there are also big differences. In Georgia, the recognition took place after a brief war on a very limited area (even if the strategic bombing had extended beyond the area of the invasion by land). In the case of the attack on Ukraine, however, the recognition provided the pretext for much larger military operations. But also, as Georgian President Salome Zourabishvili noted: "Russia in 2008 was not exactly like Russia in 2022 [...] Russia is moving directly towards annexation even without the pretext of war, which means that we are a step higher in the level of conflict".

The Georgian parliament recently approved a Resolution in support of the territorial integrity of Ukraine , much criticised by the opposition because at no point is Russia openly mentioned. In the reactions of the entire ruling class of Tbilisi today, however, Russia is indicated as an aggressor without the reticence of the past which, according to Zourabishvili, was due to the precarious Georgian security situation.

Until a few days ago, Armenia was the only country in the Caucasus to be linked to Moscow by an alliance pact. Nevertheless, like Belarus, Armenia has not officially recognised the political choices of the last 14 years of Russian wars, and therefore does not recognise either Abkhazia or South Ossetia, or the annexation of Crimea. As regards the recognition of the two new secessionists in Donbas, and the crisis in general, questioned by the press, the Armenian Foreign Minister replied: "We certainly want the existing issues between our two friendly states to be resolved through diplomatic dialogue, negotiations and in accordance with the norms and principles of international law and the Charter of the United Nations. We hope that the necessary steps are aimed at reducing the tension and resolving the situation peacefully". Asked whether Armenia would recognise Donetsk and Lugansk, he replied that recognition is not on the agenda.

Today’s Russian military aggression puts Armenia in a very difficult situation, not only because Armenian-Ukrainian relations are good, but also because an important Armenian community resides in Ukraine – in Donetsk alone, more than 50,000 Ukrainians of Armenian origin and Armenians who emigrated to Ukraine. The Armenian Embassy  is operational in the country and a possible evacuation plan for the Armenians is being prepared.

The reaction of the de facto president of Nagorno Karabakh Arayik Harutyunyan was far more enthusiastic. Karabakh is not recognised by any country, including Armenia and Russia, although the latter is stationed there with a military garrison of peace-keepers, similarly to what happens in Transnistria, a separate region of Moldova. Harutyunyan was quick to compare the situation in Karabakh with that of Donetsk and Luhansk, thus hoping for recognition for the de facto entity he chairs.

On 22 February, Azerbaijan's President Ilham Aliyev travelled to Moscow, just shortly after Russia recognised the independence of Donetsk and Luhansk. The meeting between Putin and Aliyev lasted about 5 hours and led to the signing of a Declaration of Allied Interaction which takes collaboration between the two countries to a higher level. During the meeting, Putin took care to inform Aliyev that Russia's non-recognition of Ukrainian sovereignty does not concern the other post-Soviet republics. On 14 January. as the crisis was mounting, Aliyev went to Ukraine  where he signed a Declaration of Deep Strategic Cooperation with President Volodymyr Zelenskyy which establishes the willingness to provide mutual support for the sovereignty and territorial integrity of the two states within internationally recognised borders, also against hybrid threats, for stability in the Black-Caspian region and beyond. The Allied Integration Declaration  signed by Azerbaijan with Russia instead provides for mutual military support but within the framework of the United Nations Charter or separate international agreements.

On 23 February, Aliyev then talked on the phone with his true great ally, Recep Tayyip Erdogan, after the latter had had a telephone exchange with Putin during which he had condemned the recognition of Donetsk and Lugansk. There is no doubt that Azerbaijani and Turkish policy in reaction to the ongoing invasion – which directly threatens the interests of the two countries because it puts the security of the entire Black Sea region at risk – will be coordinated.