Georgia applies to join the EU 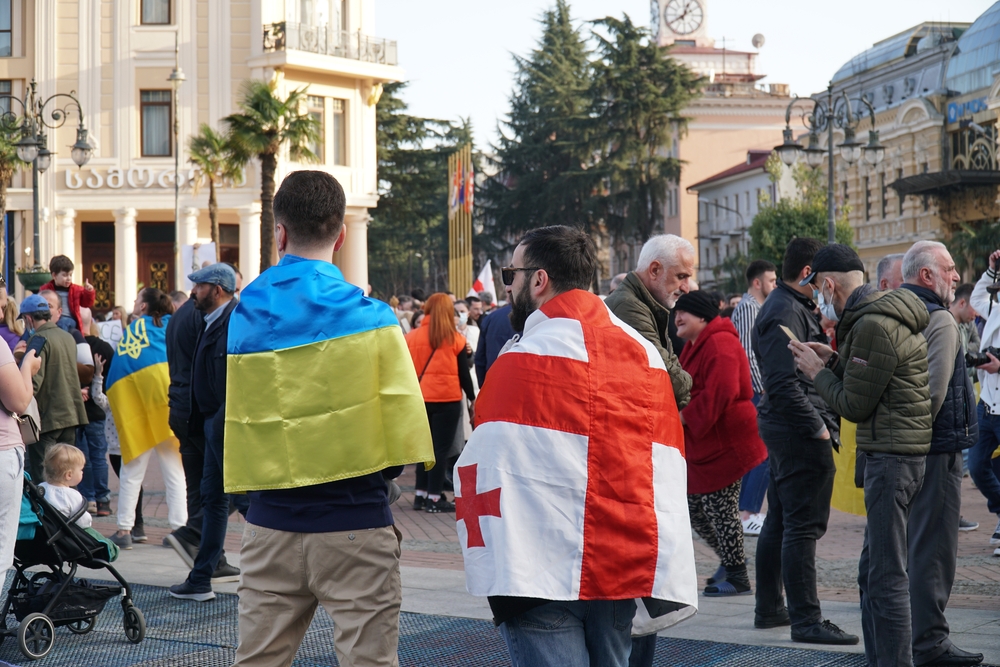 The aggression against Ukraine has generated a series of so far unforeseeable consequences, particularly in the countries of the former Soviet bloc. Georgia is experiencing an acceleration of processes that were underway but were not on the agenda, including the request for EU candidacy

The aggression against Ukraine has detonated in its political as well as military dimension, well beyond fighting. All is coming to a head for all those political forces that flirted with the Kremlin even when it had positions clearly hostile to the countries in which these political forces operate. In many countries, Putin's friends of yesterday now distance themselves from his actions and more or less openly deny past ties. In Georgia, the situation has led to an acceleration of all the processes that were certainly already underway, but with results that were unimaginable up to 10 days ago.

When Georgian Dream won the elections in 2012, rumours of the entire political project's link with Russia circulated abundantly. Founder Bidzina Ivanishvili is an oligarch and made his fortune in Russia. Especially in recent years, the Georgian government, now led by Ivanishvili's chosen heir, Irakli Garibashvili, has made relations between the European Union and Georgia more uncomfortable, if not difficult. Growing rumours in the country warned that Tbilisi had reversed the course with respect to the Euro-Atlantic aspirations also enshrined in the constitution. The process, however, was not carried out openly, also because when the government gave space to Russia in the political arena, public opinion unequivocally disagreed. This was the case in 2019, with the anti-Russian protest due to which direct Russia-Georgia flights are still suspended.

This was the context in which the political bomb of the aggression against Ukraine detonated, with the obligations it imposed on non-belligerent countries in terms of taking a stand with respect to the parties, and deterrence through their soft and hard power.

The position of the Georgian Dream

In 2008, when the Russian assault on territorial integrity targeted Georgia, with bombings throughout the country and fighting a few kilometres from the capital, Tbilisi had received full Ukrainian solidarity. The reaction of Georgian Prime Minister Irakli Garibashvili has been very different. He condemned the attack, but stopped there. By explicit will of the premier and his majority, Georgia does not participate in the sanctions against Russia, has not closed the airspace to Russian transit flights, and has declared that it is not necessary to personally bring one's solidarity to Kyiv. According to the premier's assessment , Georgia does not participate in the sanctions because they would have too high a cost and in any case are useless, obviously including in the judgment those imposed by other states.

While governments and parliaments in a large part of the world meet to discuss and condemn the aggression, coordinate legislative and executive activities, open consultations with their respective security bodies for constant monitoring of what is happening and any repercussions in terms of national security, in Georgia everything is silent. The extraordinary session of parliament requested by the opposition and authorised by President Salome Zourabishvili did not take place. Georgian Dream, which holds the absolute majority of seats, has boycotted it as a "show". The MPs who showed up on the day of the session literally found the door closed in their faces. Parliament was closed  to its own representatives.

Not a single meeting of the National Security Council was held, although it was called for by both the opposition and President Zourabishvili, and this despite military movements recorded along the administrative line between the secessionist territories and the area under the control of Tbilisi. In fact, since the beginning of the invasion – in the case of South Ossetia even before it began – the secessionists have increased their military operations in the event of an expansion of the conflict.

The behaviour of the Georgian government did not go unnoticed in Kyiv. President Volodymyr Zelensky, seeing the mobilisation of Georgian citizens, tweeted  that sometimes the citizens are not their government, but better than the government.

The real fracture came a couple of days later. The Georgian government blocked 60 volunteers heading from the Tbilisi airport to Ukraine, where a Georgian Legion has been fighting with the Ukrainian regular army for years. Following such refusal, Kyiv recalled its ambassador  from Georgia for not letting volunteers leave and for its "immoral position" against sanctions.

The position of the Georgian state

However, a tide is swelling: these are the daily demonstrations  that are held above all in Tbilisi but also throughout the rest of the country against Putin's Russia and in favour of Ukraine and the free sovereignty of post-Soviet countries. The tide is rising not only quantitatively, in terms of the number of participants, but also qualitatively. The demonstrations were in fact born as a protest against aggression, but are increasingly developing an agenda of domestic and international politics. Protesters continued the call to join the sanctions. After the refusal to let volunteers leave – whereas many countries are loosening limitations on foreign fighters to support the Ukrainian resistance – Georgian protesters have called for a policy of open skies for Ukraine and closed skies for Russia. But it was after the withdrawal of the Ukrainian ambassador that the outrage reached a peak, with protesters disavowing the incumbent government and demanding the resignation of Garibashvili and the immediate return to the European path.

The Head of State is moving in this direction.

President Salome Zourabishvili has deployed all the resources that her institutional role allows her to mend Georgian-Ukrainian relations. She sent a message  to the Ukrainian people. She then called Zelensky who thanked her for her support. Georgia is sending humanitarian aid and Georgian ambassadors are supporting Ukraine in all international fora where war is discussed.

President Zourabishvili then left  for Paris and Brussels. Zourabishvili stated that the Ukrainian tragedy is changing the scenario of European interest and willingness towards Eastern Partnership countries that have ambitions to become EU candidate countries, and she identified this as a great opportunity for Georgia.

While Georgian Dream argued that no candidacy would be presented before 2024 and got lost in bizarre accusations against the Ukrainian ruling class for the ambassador’s withdrawal, President Zourabishvili actively brought a counter-narrative to Europe about the nation’s will.

The Presidency's diplomatic initiative and the pressure from the streets led Georgian Dream to decide to bring forward the presentation of the  EU candidacy  to March 3, 2022.

The opposition's positive reaction was immediate. The Secretary of the main opposition party, Nika Melia of the United National Movement, hailed   this passage as follows: “I congratulate the Georgian people for their struggle, for their presence [in the streets], for their determination and thirst for freedom which have produced results: the government of Georgia was forced to apply for EU membership. I would like to appeal to the Western world: we agree with President Zelensky, we may not have a decent government, but we are a respectable and combative nation. Our government may not deserve your trust, but we, the Georgian people, deserve it. We therefore appeal to all of Europe to accept this question. Georgia's place is in Europe".