Putin, the Russians and the Ukrainian war 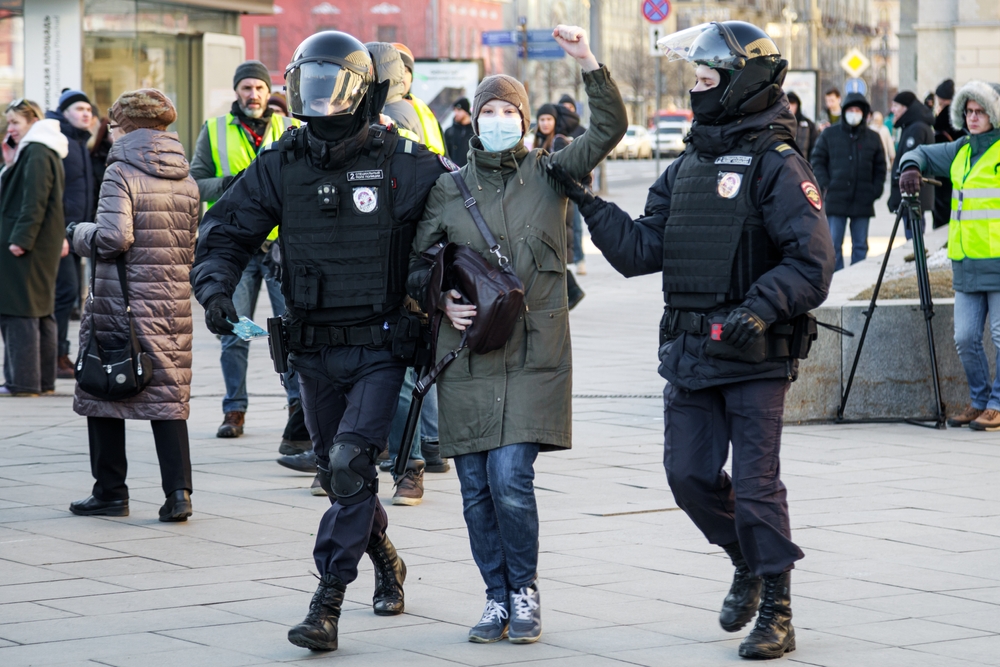 Moscow, Russia - 2022.02.27 - police officers detain a woman on Pushkin Square on the day of an anti-war rally © Konstantin Lenkov/Shutterstock

Analysis of Russian aggression and invasion of Ukraine understandably focuses on chauvinist revanchism and Great Power pretensions within the Russian elite seemingly shared by what appears to be a broad part of Russian society. While the constructivist and neorealist approaches that come out of political and geopolitical scholarship are valid, I want to pay attention to a “bigger” and simultaneously “smaller” picture. This is the issue of Russia as matter-out-of-place in Europe since 1989, and the disturbing lack of interest among Europeans — and European scholars — in Russians themselves.

My main points are as follows: Russian society is diverse, and attitudes towards the war are complex and hardly revanchist or neo-imperialist. Furthermore, incredulity in the West about an “absence” of resistance to the war in Russia demonstrates our own ignorance about the nature of the authoritarian state. Finally, we should resist the urge to ascribe collective guilt and imposing collective punishment — we should avoid vulgar sociological conclusions about “low-information”, uneducated supporters of Putin’s actions within Russia.

Defining Who Is (and Isn’t) “European”

It is understandable that people are focused on the struggle of the Ukrainian people against invasion, but the conflict itself proves the point that “Russia lost Ukraine” (a popular phrase in Russian geopolitical thinking) long ago — in 2004 in fact, or even 1989, when the Soviets permitted a civil-political opposition, Narodyni Rukh (“People’s Movement)”, to form in Ukraine.

Ukraine is a European nation, and soon a European state. But so is Russia. And few are ready to reflect on this. It’s a function of our ingrained Cold War mentality that we think it right and natural that the biggest country by population and size in Europe is not relevant to the “European project”.

Without going into detail about the failure of the Eastern Partnership of gradualist integration of some former Soviet states — which itself reflected the (self)-exclusion of Russia from consideration — it has suited the EU to ignore the 110 million Russians (if we discount Siberia and the Far East). It has been perfectly willing to issue golden visas to the tens of thousands of Russian millionaires, but the fact that there are only piecemeal scholarships and bilateral educational ties, and little chance of an average-waged person to get more than a two-week Schengen visa reveals engagement for what it is — negligible.

What was one of the first responses from the Czechs to the Russian invasion? A proposal for collective punishment by suggesting that Russian citizens be banned from Schengen. Similarly, there are plenty of my colleague-scholars who feel comfortable in Europe, writing and signing letters calling on intellectual communities to exclude Russians completely.

Of course, the Russian leadership was also very comfortable with the situation up to now — Putin got to visit his residence in Spain, his ideologues and their children had permanent homes in Italy and the UK. Entire political factions in European countries are now tainted by their willingness to take money in exchange for whitewashing Russian autocracy. The silent consensus to allow corrupt Russian capital funnel money to the West is a form of connivance not lost on most Russians, whose national wealth has been stolen for more than a generation.

Perhaps this is the real ressentiment we should be speaking about: these “other” Russians, rather than the English-speaking intelligentsia and the smart new rich, remained (along with the Serbs) the last not-quite Europeans, unworthy of mention or consideration. But they were the ones pumping our oil and gas and digging out metals. There is no EU-Russia bilateral instrument that views relations other than through the lens of trade or economy, in stark contrast to the concept of “freedoms” within the bloc that are at least partly social and people-centric.

Boris Yeltsin rode to power partly by exploiting the opportunity presented to him by the historical denial of Russians as political subjects, as a nation-state. And once again, we were, as Europeans, very happy to support him, even when he abruptly turned around and created the authoritarian revanchist state we see today. As Viacheslav Morozov notes , despite the creation of the Russian Federation, different peoples, including ethnic Russians, remain denied any political subjectivity within a “subaltern Empire”.

Russia occupies the no-man’s-land between the “civilized” centre and the orientalized periphery. It is doubly oppressive, both at home and abroad. But its inhabitants are victimized a third time when we project our liberal fantasies derived from social movement theory about the possibilities of “good” regime change. Then we chastise and judge unfitting those who are not willing to destroy themselves in symbolic virtue signalling. For us it is only a click on a mouse. For them it is losing their jobs, their educations, their citizenship, their lives.

Russia itself, with enormous centrifugal and centripetal energies grinding with deafening silence against each other, is also silenced by our focus on elite politics. Russians essentially serve as a “lack” in the European imagination, to be counterpointed to our own plenitude. We supposedly enjoy civil society, a deliberative public sphere, democratic institutions and traditions. Russia supposedly has none of these, but, as I write, over 8,000 people have been arrested for protesting openly against the war in Ukraine — an act that is now tantamount to “treason”. Nonetheless, informal NGOs organise social solidarity and legal aid for political prisoners.

It bears emphasizing that everyday life in Russia is incompatible with widespread opposition to the regime and political elites, because spaces for solidarity-building that would help such resistance to effectively grow and sustain are closed down. Ukrainians and other Eastern European nations that have been victims of Russian and Soviet historical crimes are now rehearsing speeches I have heard so many times: blaming lack of visible action among everyday Russians, holding them accountable as complicit. These are well-worn arguments for anti-racist scholars, too. Blame and punish people who are oppressed. How does this build solidarity? We know that it does not.

Everywhere, even in Ukraine, Russians use everyday prefigurative tactics to try to become political subjects. A tank driver emptying his fuel on a winter road outside Kharkiv is not only an act of self-interest, it’s a claim to think differently than the forces controlling us. Jacques Rancière calls this “politics as a process of subjectification”.

Many Russian soldiers have been violently coerced or tricked into service . In Russia itself, Russians have been living in an autarkic securitized state where living standards have noticeably deteriorated since Putin’s annexation of Crimea in 2014. David Harvey, writing for Focaal , focuses on the economic and moral humiliation of Russian people in the 1990s, and their exclusion from international institutions on any but the most immiserating terms. As Tony Wood points out in response , it is dangerous to psychologize from humiliation, as this can be misinterpreted as a justification for Russian aggression.

My ethnographic work in Russia tries to bring out the diverse powers of agency, world-making and critical political thinking among “ordinary” people. We see this now in the widespread revulsion within Russia towards its warmongering elite, the significant protests against the war . However, the “social” question is more complicated: we have a demoralized and economically exhausted population whose thoughts are mainly about making ends meet as a rapacious elite holds them in near bondage. The “minor mode” of resistance and subtractive action is probably the most we can hope for at the moment, although political education among precarious workers is bearing fruit. We should avoid magical thinking about mass mobilization in the Russia of 2022.

For both Ukraine and Russia, the challenges are how to undertake collective action against the same aggressor. So far, Ukrainians are teaching a lesson in solidarity as much as resistance. There remains the problem of our conditional and instrumental recognition of Europeanness. We need a prefigurative politics that recognizes and embodies common principles and ideals regardless of nationality. We need counter-institutions, anti-hierarchies, and embodied international solidarity — and here we come back to the best of Rosa Luxemburg’s work , whose ethical position proclaimed the universal worth of all people in an era of elite-captured states and global inequality.

Already there is a mad dash to emphasize the alleged “civilizational” unfitness of Russia and Russians. Suddenly, an ugly rash of journalists, scholars, and “thinkers” who didn’t give a toss about Ukrainians or Russians until last week are now channelling Thanatos and advocating World War III. The arrogant decisions of who is European, and how they are European to suit us, is partly how we got here. To assume that dictatorship means consent, coerced acceptance, or Stockholm syndrome is a facile way to avoid confronting the condition of our fellow Europeans in Russia, a highly incoherent state that has failed the majority.

Ukrainians are not “superheroes” fighting for civilization against barbarism, they are fighting for self-determination against a revanchist aggressor, an authoritarian state. They may yet lose that fight, or their fight may be submerged in a global conflict. The majority of Russians are neither passive dupes nor nostalgic chauvinists.

The sociological “mistake” here is a similar one made about the class identity of Trump supporters in 2016. The most vocal supporters of neo-imperialism are as likely to be “cosmopolitan” or materially comfortable Russians as not. They are also “social racists” at home: calling their compatriots “cattle” and “cotton-wool heads”.

What’s missing from the picture is the position of the vast majority of immiserated people, who are at worst “morally indifferent” to what’s happening — just as most of us are to the many conflicts Western states are responsible for. But mainly they are against war in principle. With both their blemishes and desires for a better life, Russians are barely distinguishable from the not-yet postcolonial peoples of France and England and have more in common with citizens of the United States than either nation would like to admit.

Jeremy Morris is a researcher at Aarhus University, Denmark, where works on labour relations, political economy, and life in the former Soviet Union. He is the author of Everyday Postsocialism (Palgrave, 2016) and blogs at www.postsocialism.org