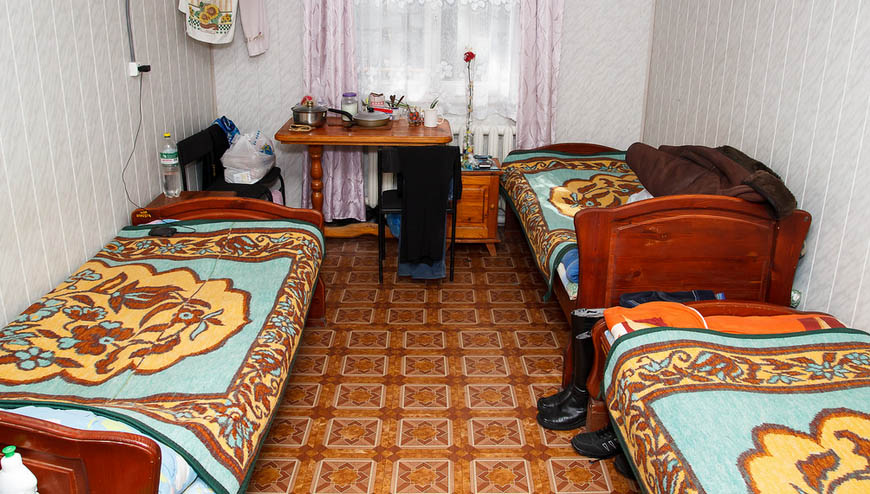 Two years after the outbreak of war in Donbas, there are many internally displaced persons in Ukraine. After the initial burst of solidarity by citizens, however, the willingness to host is wearing thin

Lviv – Mariia works in a fashion atelier. She often stays overtime, sometimes even to sleep. "I do not feel as safe as before. There are a lot of thefts in homes and shops. It used to be quiet here, but then a lot of desperate people came from the East. They have no money and cannot find a job, so they start to steal". Yet, Mariia has not witnessed a single such episode.
Also Olya, who teaches English at a private school, relates episodes secondhand. "A couple of friends had an empty second home, they immediately made it available for a family of Luhansk. They only asked to pay for the electricity and gas. Six months later, they were gone overnight, leaving a pile of bills to pay".

Stories like these have become anything but rare. The crime rate is on the rise across the country, especially as regards theft of cars and at private homes, with a +45% peak in Kiev in the first three months of 2016, according to the National Statistics Office. Obviously, there is no evidence or hint to suggest that this is in some way tied to the presence of internally displaced persons. However, a widespread feeling of insecurity can offer fertile ground to intolerance and scapegoating.

In the weeks immediately following the annexation of Crimea, in March 2014, thousands of Ukrainian citizens, especially of Tatar origin, fled to escape the climate of intolerance that was being created against them. After less than two months, it was the turn of the people of Donbass to flee war and bombs – this time, however, in hundreds of thousands. The so-called "second wave" has seriously strained the country's formerly nonexistent reception system, which now has to deal with the fourth highest number of IDPs in the world after Syria, Yemen, and Iraq.

According to the last reliable data, which date back to June, the various regional departments of social protection have registered over 1.7 million people, of which only 20,000 come from Crimea. According to humanitarian organisations, this figure could reach 60,000 – a small minority, however, compared to the total number of IDPs.

Yuriy Shyvala works for Krym Sos, an association that provides assistance to internally displaced persons. "We do not know precisely how many there are. We do not collect data, but we have reason to believe that the numbers are larger than official statistics". The Krym Sos office in Lviv is located in a dilapidated building in the city centre. Its activities are fully financed by the United Nations' High Commission for Refugees. "We used to receive private donations too – not anymore".

Despite the name, Krym Sos routinely works with people from Donbas. "Stereotypes on Eastern Ukrainians have always existed, especially around here", says Yuriy. "What happens now, though, is the fault of the media – always after the sensational news. The arrest of a thief from Luhansk is newsworthy, but no one talks about all the honest people who fled the war".

The inhabitants of Donbas are accustomed to the clichés, widespread west of Kiev, that paint them as uncouth and backward, or Donetsk as a city of criminals – prejudices often used to discredit the widest pool of votes of former President Yanukovych.

Already at the time of the Orange Revolution, in 2004, stickers circulated with phrases such as "Do not urinate in the subways, you are not from Donetsk" and "People of Donetsk, do not break the public phones – you can use them to call someone". After the Maidan revolution and separatism in the East, all of this has strongly resurfaced.

"They think we're all thieves. Not that they tell you, of course – they'll let you know", says Olga, one of the first arrived in Lviv from the Donetsk region. "I happened to rent an apartment, the first time I was here, and was told by the owner that when I went away she wanted to find all the paintings and the furniture", she says, holding back laughter. "She did not realise that the money I gave her could buy all new furniture".

Also Anna Samolyenko arrived in Lviv from Donetsk, a year and a half ago. She saw a lot of people leaving the region before her, then she also decided to pack up. "I had heard all the stories about people that hosted refugees in their homes or let them stay in a second apartment for free. However, no one has offered me anything – actually, I have always paid expensive rents".

Anna had no difficulty finding a house – she and her husband run a business and can afford to pay. "When they hear that you are from Donetsk, sometimes things change – an apartment that was available before, suddenly no longer is. Or you have to pay several months' rent in advance. I have heard of so many people in trouble for this".

The authorities do little or nothing. Public intervention is mostly organised on a local basis and almost entirely relies on UNHCR funding. The situation differs widely from region to region.
"Ukraine was not ready to cope with such a large number of IDPs and for such a long time", told Oleksandr Pavlichenko, president of the Ukrainian Helsinki Human Rights Union, to Ukraine Today. "There is some improvement, there is special legislation for refugees, but little results. We lack funds, the implementation of reception mechanisms, and the commitment of institutions – there is an evolution, but we would rather need a revolution".

In recent months there has been a slight decline in the number of internally displaced persons. The repeated truces, even if continually broken, have significantly lowered the intensity of the conflict, and many areas that were previously off limits today are inhabited, although with great difficulty and in front of a danger that is never entirely absent. This has partly stopped the flow of IDPs and also enabled some returns. Too often, though, there is no alternative. "When you run out of savings, you cannot find a job, and the State does not help you, you have no choice but to go back to your home, even if it is close to the front", continued Pavlichenko.

If going back is the only option for someone, others have no other choice but to stay and start a new life – hopefully, someday these people will cease to be IDPs and go back to being citizens.