Tamara and Van, a same fate 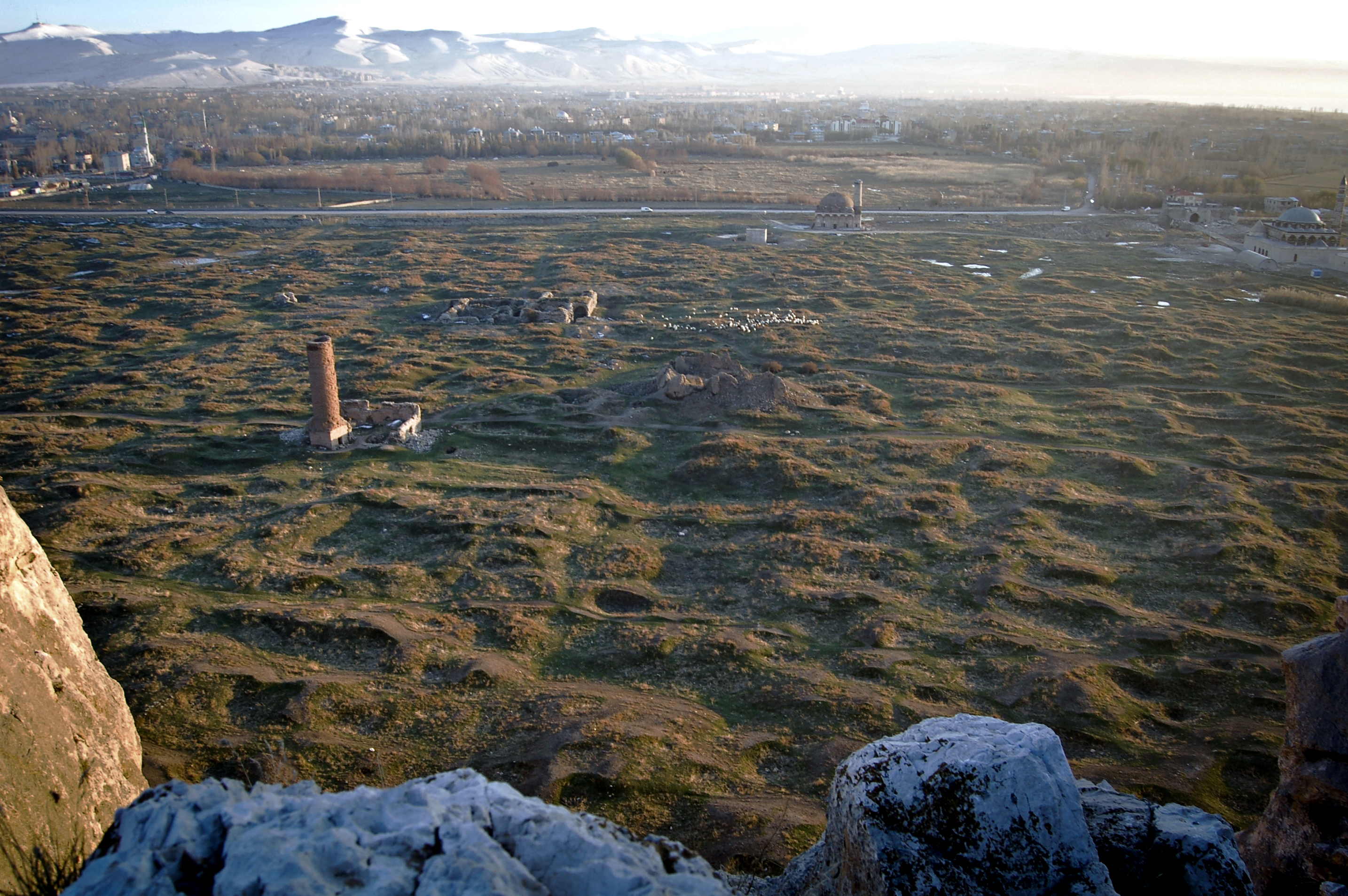 A city symbol of the Armenian resistance. Razed twice to the ground, first by the Ottoman troops and then by the terrible earthquake of last winter, Van seems to share its destiny with the beautiful Tamara, a legendary figure disappeared in the abysses of the lake it looked over. The eighth episode of our report, “From the Caucasus to Beirut”

A minaret lies on the ground like a log brought down by the wind. Made with twisted iron and breached concrete, the relic gathers a silent crowd around it. In turn, each of the people weighs its splinters, measuring the caducity of something that faith would want to be eternal. In silence, the men take their coats off, laying them Southwards on the ground, until everyone in the square, in unison, kneels down among the ruins. Meanwhile the snow quickly covers everything, as if nature would want to draw a white veil of shame over the wounds brought by the earthquake a few hours earlier.

Van in this world, paradise in the next

Van, far Anatolian East, a crossroads of routes, the foundation of empires, witness to massacres, trophy of wars. The Orient Pearl now counts its dead. Under the ruins brushed by the snow, tens of corpses await to be found, while those who are still alive burn frames found amidst the debris, so to get warm. Resigned, a man in a jumpsuit is having his hand bandaged, laying down on the street, while with the other hand he asks for cigarettes to passers-by. In the air, jackhammers are pounding asynchronous, muffled only by the heavy snowfall. This morning, Van finds it hard to recognize itself, shaken within the limbs of the earthquake violence. The grimace of the city’s excruciating pain, though, is just a scratch, compared to the destruction that the armies, not nature, brought to it 93 years ago.

A flake falls slowly, floating in the air. Before it touches the ground, I stop looking at it and bring my gaze back towards the sky, seeking another one. And so on, till I muster the courage to look down. My destination – the hostel where I spent my summer two years ago – is a pile of rubble under the snow. On my way from the Caucasus to Beirut, Van would have been the only place where I could have drunk tea with my old friends, watch the stars in company, listen again to the stories of an old hostel keeper met some time ago. While it piles up, the snow softens the sharp profile of the rubble: there are ten souls, along with that of the hostel keeper.

Another Van unravels at my feet. Four kilometers away from the modern city, embedded between the Urartian fortress and the banks of the largest lake in Anatolia, another expanse of debris marks the land. The ‘resistant city’, the stronghold where Armenians in 1915 barricaded themselves to face the Ottoman troops, ancient Van lies still, framed by ruins scattered within the radius of one glance. The city welcomed within its walls 250.000 Armenians, refugees fleeing the inland provinces.

Supported by the Russian Empire, the resistance went on for months, echoing in the stories of the newborn diaspora, from Yerevan to Iraq. When Atatürk’s troops marched on the city, in early April of 1918, Turkish officials decided that day would mark Van’s funeral: 3000 years of history were razed to the ground and the new city was rebuilt four kilometers away, on a modern street axis and with avenues forming squares. The same avenues that yesterday’s earthquake filled with debris and corpses.

A flock makes its way through the mud and the snow. Like Ani, a ghost of stones and solitude, ancient Van is a sterile expanse of remains left to the wind and the shepherds. There is only a minaret still towering over the ruins, while on the Southern side of the city, a short stretch of walls left intact guards a portal and two defense towers.

A sign explains that Van was destroyed during the war between the Russian occupants and the Turkish army and that, following the Turkish victory, the Christians living in the city chose to flee with the Russian enemies, with whom they had collaborated. As in Ani, no acknowledgment of the millennial Armenian presence; as in the ancient capital, no care for the archeological heritage: it is going to sink in the earth and take away with it the traces of a history that is to be forgotten. Van, however, continues to play the role of Armenian outpost in this land, because there is one element that defends its history and that not even revisionism can tame: water.

A shut gate does not allow access to the pier, while two docked boats nervously follow the rhythm of the waves. The lake in Van’s suburbs stretches as far as the eye can see: it blurs its blue reflections with those of the clearer skies of the plateau. Far off, a small shadow against the sun, the isle of Aghtamar hosts the ancient cathedral of the Holy Cross, for nine centuries home of the Armenian Catholicate, monastic center and, symbolically, the spiritual center of the whole Armenian minority in Anatolia.

Restored in 2007 and opened to the public as a museum, the church attracts thousands of visitors every year, shining a light on the Armenian past of this region. This morning, there are no ferries running: probably the whole staff has remained in the city to dig through the rubble. I settle with admiring the lake and comparing it with the packet of cigarettes bought in a tobacconist in Yerevan, Armenia. Through the drawing on the packet, these cigarettes, called Aghtamar, tell the legend that gives name to the isle. A beautiful Tamara rises on the isle’s shore with a torch in her arms, a signal for the lover that will swim to her. Unaware that in just a few moments, knowing he has sunk in the lake, she will follow him down in the abyss. 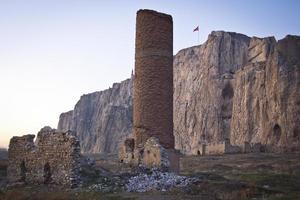 Three days after the earthquake, news of tragedies travels from the villages of the boundless Anatolian countryside. The heavy snowfalls are isolating the small communities of Kurdish shepherds populating the pastures of the plateau. The stables where the oxen and sheep would spend the winter have been torn down. Hay, fodder, food reserves, the sustenance of thousands of people: everything is exposed to the inclemency of the weather. A Turkish non-governmental organization distributing plastic towels accepts an Italian reporter on the van. Hours of driving at a crawl to reach isolated villages, human settlements touched by modernity from afar. While the heads of family in a village of about 6 or 7 houses throw themselves at the towels, I shy away on the roof of a mosque, from where the surroundings appear as a monotonous white desert. In this very countryside, a century ago the Ottoman troops massacred Armenians in villages that must have looked like this one: isolated, defenseless, unaware of the big changes shaking their land and the entire world.

It is impossible to continue. The West-bound buses leaving Van are fully booked for many days to come, filled with families fleeing this hell of cold and rubble. While the quakes are non-stop, those who have remained in the city populate the streets and squares with tents and sheds. From a small clearing on the edge of the village, where tens gather around bonfires sitting in the mud, voices of Afghan refugees rise. A glass goes from hand to hand, filled with tea by an almond-eyed young boy who speaks English: “We came yesterday from Iran, on our horses. Someone had told us that, after three days riding, in Turkey we could rest. But instead…”. Men, women, children bound for Europe. I think of all the human flows that have silently crossed this corner of the world, I think of the immeasurable size of the human diaspora, a condition that, for an ever growing number of people, becomes an irreversible style of living. Millions of people on the run from hundreds of conflicts. At least, tonight snow has stopped falling over Van.

Buses maneuver slowly in the otogar, before disappearing in the clearing. I linger under the bus shelters. A thermometer reads minus 14. I wait for rumors to be confirmed: apparently some seats are now free. Finally on the bus, the impatience that has been with me since I have been stuck in Van suddenly disappears, making room for a disturbing sense of imminence. The images collected in the past few days slide away, making way for the upcoming ones of the entrance to Syria. The bus leaves in silence, challenging the sense of death that the plateau’s winter night inevitably carries with it.