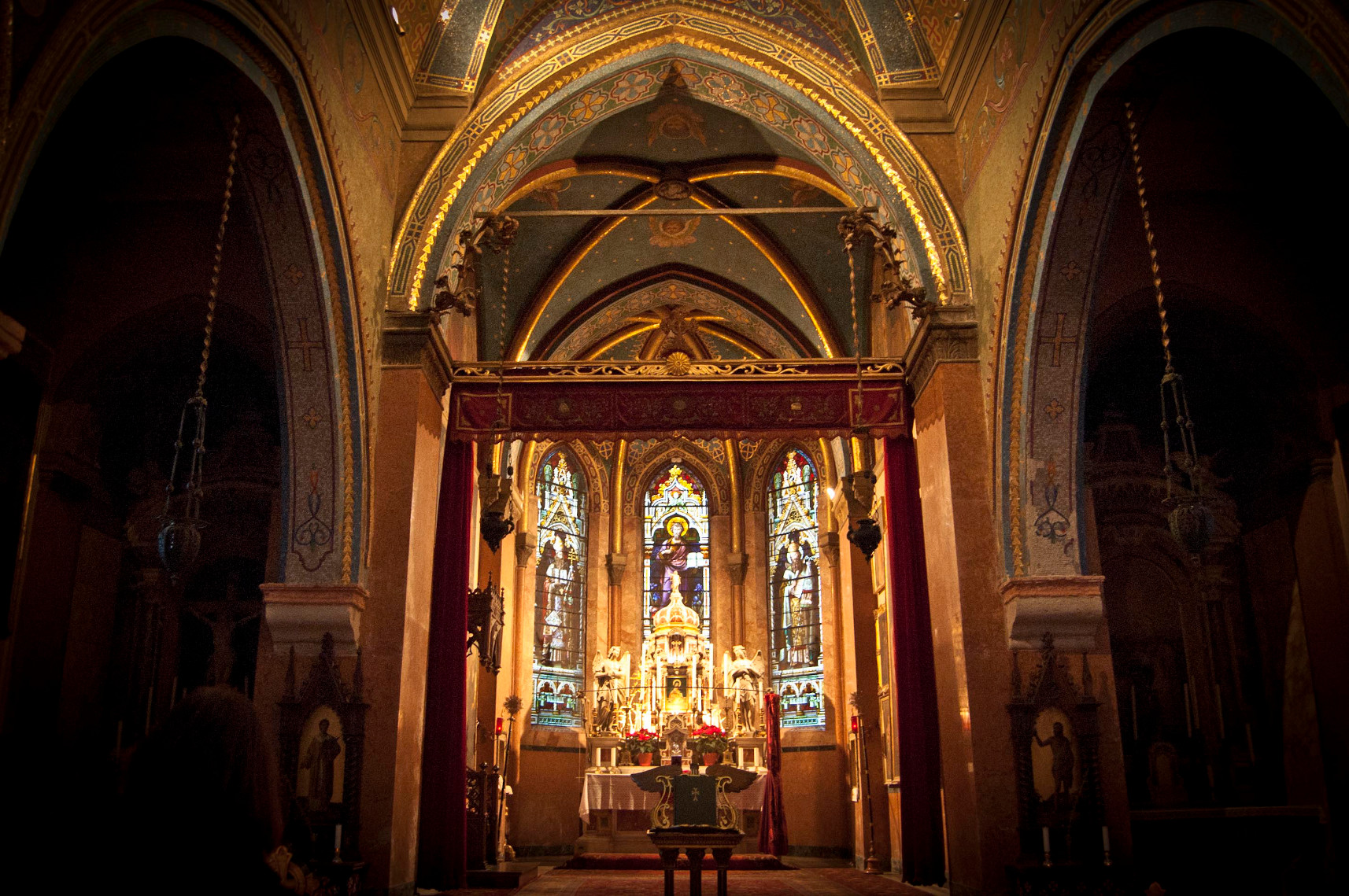 ‘Everybody talks about Syria, but nobody does anything. Instead of stopping the whips, people count while we are being flogged. How is that possible?’ Ibrahim is twenty years-old, lives in Damascus and longs for a different Syria. The last episode of “From the Caucasus to Beirut”, a journey on the discovery of the Middle-Eastern Armenian diaspora

Ibrahim keeps the window down, sowing his young ideas in the still noon air. His words are sharp like stone. In those words, the awakening of a generation is fulfilled. The Arab Spring is first and foremost a process of verbal re-appropriation, the conquering of a new, fulfilled expressive dimension. Even if the regime survives itself, even if Assad and his courtiers remain on the throne, unknown heroes like Ibrahim will still have picked the most beautiful flower of their Spring: the strength to speak.

Al Tall, a twenty-minute drive from centre-city Damascus. The store shutters rolled up are filled with merchandise, children run to their Mothers on their way out of school. As in Damascus, life flows by always the same; as in the capital, everything seems to be in its place. The same stubborn normalcy repeated and awaiting the looming change. All of a sudden, Ibrahim stops in front of the post office: ‘We wrote those last Friday during the demonstration’. The eyes are lifted up to the third floor, where slogans of protest against the regime cover the plaster. ‘It’s not easy to erase them up there’. As a cascade of verses, the writings come down to the ground floor. Passers by discretely read them pretending to do something else.

Armenians and Jews, we are all here.

You should remember this more often, in the West.

The Middle East is the only haven

‘Welcome, our home is your home’. Mahmud and Khalil, Ibrahim’s Father and Brother, are sitting with their legs crossed around the mezze, a dish of pasta with chickpeas, yoghurt and olive oil. Reporters have never visited them, banned by the regime till popular demonstrations took to the streets. ‘Our silence days are over’. Old Mahmud pours mint and limonella tea. ‘Why hide if the regime punishes everyone indiscriminately?’

Ibrahim is twenty, but his gaze makes him look twice as older. In the Umayyad Mosque, throbbing heart of old Damascus, he stood apart along with a group of fellow university students, on March 18th, waiting for the great Friday prayer to end. While the faithful were slowly coming out of the prayer room, the boys started singing choruses of protest, echoing the rebellion started four months earlier in Tunisia. ‘The Umayyad Mosque represents this Country’s immense history, humbled for the past forty years by Assad’s dictatorship. That’s why we met there’. The secret service knew everything. ‘They were waiting for us at the gate, no uniforms, armed with canes. I don’t know how long they detained us, the light is always the same, when you’re underground’.

The whole family was arrested about a month later. Ibrahim nods as his Father goes over the endless night when the special forces broke in their house. ‘They blindfolded us with our own shirts, handcuffed us and threw us in the middle of the street’. On the van, tens of other prisoners. ‘They insulted our wives and sisters. If anybody responded, they would end up in the torturers’ hands once we got to the prison’. That night, Al Tall saw over 1.500 people get arrested. The three were released after four endless days. ‘Many others have disappeared, just vanished’. Mahmud takes leave. ‘Everybody talks about Syria, but nobody does anything. Instead of stopping the whips, people count while we are being flogged. How is that possible?’

The road to the Saydnaya Monastery winds up through the soft slopes of Qalamum. The vegetation keeps getting sparser and sparser, leaving room for a timeless view, a photograph of a century when the stately foundations of the church were laid down on the rock by the monks. With worried eyes, Ibrahim looks down below at the sky over Damascus. ‘It all depends on the sky. Only a UN no fly zone could stop the massacres carried out by the helicopters during the demonstrations’. A dense yellowish cloud is starting to gather over the capital. ‘The revolution is going to win anyway, but for me time is of the essence. In a few months, I’m going to be called up for the draft. If the regime doesn’t fall before that, I’ll have to run away’. Thousands of young Syrians are in his same situation. ‘I will never point a gun at my people’.

Christian and Muslim families stroll among the kiosks and chapels of the Monastery of Our Lady, where Ibrahim speaks without the fear of being heard. ‘A Sunnite like me knows that his career is bound to be mediocre’. The thread of reasoning weaves desires and expectations for a society based on equality, equal rights, meritocracy. ‘I can see that minorities fear change’. The outlines of a crucifix look like a seal over the sunset. ‘But Christians, Jews, Alawites, Kurds, Armenians, Druze and Sunnites lived in peace in this region long before the Assad dictatorship set in. This – he concludes – is also their revolution. When it’s over, differences will mean nothing any more’.

My last night in Damascus is vibrating with thoughts. ‘When you come back to visit us – Ibrahim promises before falling asleep – Syria will be a different Country’. In the darkness of the room, the revolution seems to fill every space, until it takes your breath away. Without the support of minorities, the protest is sliding over to become a civil war. It is going to be Lebanon again, Iraq again. Courage and tyranny will learn to quickly swap clothes, and once again history will offer its children but one alternative: continue to survive. There is no more room to take notes, I did not have the courage to carry my journal with me and the tourist guide only has 3-4 blank pages. I am leaving Damascus tomorrow. I will be home for Christmas after one year travelling. Good night, Ibrahim.

The steamboat approaches the isle of San Lazzaro degli Armeni, riding the waves of the Lagoon while, on the opposite side, the outline of Venice is becoming more and more blurred. The small isle hosts the most manifest traces of the Armenian presence in Italy. On the quay, the custodian welcomes a small group of visitors in the early afternoon. “Welcome”. Kevork is an Armenian from Lebanon and has the simple features of the many Armenians met between the Caucasus and Beirut. ‘I have been in Italy for 30 years, now. I rarely go back to Lebanon and only for a few days’. A sad smile crosses his face. ‘Beirut will never be the same, after the civil war. It’s impossible to re-educate the people who have lead us for 25 years unrestrained’.

The low sun reflects on the still waters of the Lagoon while, in the silence surrounding the isle, even thoughts seem to make noise. Sitting on the pier, alone, I take out the last cigarette from the packet I bought at the airport in Yerevan. The torch that Tamar holds in her hand is still burning, renewing the desperate call for a man that will never come. The legendary woman portrayed on the packet gives the name to the Isle of Aktamar, on Van’s lake, Armenian sanctuary of silence. Just like San Lazzaro. Tamar has been looking for her man for too long. Her lover drowned in the abyss too long ago while swimming to her. The packet floats on the dense surface of the Lagoon, until Tamar finally sinks to her destiny. And the legend is ready to be told again.