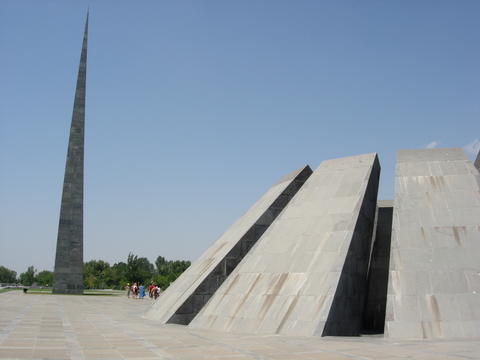 A US Congressional resolution, which urges Washington to recognize the 1915 massacre and deportation of as many as 1.5 million Armenians in the Ottoman Empire as genocide, raises concerns about future of Armenia-Turkey process

A congressional committee on foreign affairs in Washington last week narrowly passed a resolution urging the US to recognize the 1915 massacre and deportation of as many as 1.5 million Armenians living in the Ottoman Empire as genocide. Although such resolutions are not new, usually ending up with presidential pressure stopping any corresponding bill for fear of alienating and antagonizing Turkey, the resolution came at a particularly sensitive time. Although Turkey denies the charge, it does admit there were Armenian deaths, but adds that many Turks died too.

In an attempt to resolve that painful past, Armenia and Turkey signed two historic protocols in October intended to establish diplomatic relations and open the border between the two estranged neighbours. The border was closed by Turkey in 1993 in solidarity with Azerbaijan during its war with Armenia over the disputed territory of Nagorno Karabakh. Over 25,000 died during the conflict and a million forced to flee their homes. By the time of the ceasefire agreement signed in 1994, Armenian forces were left in control of 14 percent of territory in Azerbaijan outside of Nagorno Karabakh proper.

Sixteen years later, however, a peace deal remains as elusive as ever, and Azerbaijan strongly objects to the ratification of the protocols until a solution to the Karabakh conflict is found and Armenian forces withdraw from the territory it occupies. As a result, many analysts believe that delays in ratification of the protocols has come from Ankara rather than Yerevan, frustrating U.S. Policy makers as much as Armenia. It is for this reason, they say, that US President Barack Obama did not strongly object to the congressional committee vote as much as his predecessors did.

Armenia submitted the protocols to parliament last month, but along with an amendment to legislation on international treaties to for their annulment in case Turkey does not fulfil its side of the agreement in a timely manner. “If, as many suspect, it is proven that Turkey’s goal is to protract, rather than to normalize relations, we will have to discontinue the process,” said the Armenian president, Serge Sargsyan, on his recent visit to London. Sargsyan is also known to be infuriated by Turkish attempts to link the agreements to resolution of the Karabakh conflict.

“A country dreaming about a region without borders should take the first step and end Armenia’s blockade,” Sargsyan was also quoted as saying in an official statement issued by his presidential office. “If Azerbaijani pressure does not allow Turkey’s parliament to ratify the protocols, then nothing keeps Turkey’s executive authority from opening, even before the protocol ratification, the border between the two states which it itself had closed.”

Yet, despite what might seem like a success for Armenian foreign policy in term of shifting the blame on to Turkey, others in Yerevan are taking a different line. Speaking at a demonstration to mark the second anniversary of the 1 March post-election unrest which left 10 dead, extra-parliamentary opposition leader Levon Ter-Petrosyan was particularly scathing. The former president, addressing around 7,000 supporters, called the process of rapprochement “humiliating” even though he is as well known for his conciliatory position towards Armenian-Turkish relations.

Others are also critical, but for different reasons. The nationalist Armenian Revolutionary Federation – Dashnaktsutyun (ARF-D), once a government coalition member until it resigned its seats in protest over the process of normalization last April, was as unhappy with the narrow margin of the congressional vote. In 2007, a similar resolution was passed with 27 in favour, but this year it was passed only by 23 votes to 22. The ARF-D also said it believed that the protocols, including a provision for Armenia and Turkey to resolve their own painful past through the establishment of a historical commission, was responsible for the slim victory.

“I think all those who followed the committee debate understood and saw very well just how these protocols can put the brakes on the process of international recognition of the Armenian genocide,” Armen Rustamyan, a senior ARF-D leader, told the media afterwards, and even despite the successful adoption of the resolution as well as its failure to translate into legislation in the past. “When we had been saying that for months, many thought that this is just a partisan view.”

Perhaps of more concern, however, has been reaction from Turkey and the United States. After the resolution was passed Turkey recalled its Ambassador to the United States for consultations, while analysts warned of the country's possible shift away from the West and the disruption of US military operations in Afghanistan via the Turkish Incirlik airbase. “The decision of the Foreign Affairs Committee will not hurt Turkey, but it will greatly harm bilateral relations, interests and vision,” the Turkish Prime Minister, Tayyip Erdogan, said soon after. “Turkey will not be the one who loses."

Meanwhile, U.S. Secretary of State Hillary Clinton telephoned the House Foreign Affairs Committee Chairman to urge him not to introduce legislation on to the floor. Obama also reportedly called his Turkish counterpart, Abdullah Gul, to urge timely ratification of the protocol, leading some to consider the resolution might also serve as increased pressure on Turkey to do so, especially five months after the protocols were signed. On 24 April Armenians will mark the 95th anniversary of the massacres worldwide, and pressure will be on Obama to recognize them as genocide will increase.

Few expect him to do so, of course, and not least because of Turkey's continuing strategic importance to the U.S., but the potential political fallout might well be significant. President Obama promised to recognize the Armenian Genocide in his election campaign. For now, however, while activists in the large Armenian Diaspora hope that he might still do so, Yerevan and Washington are more concerned by another reality. Hoping that normalization between Armenia and Turkey will contribute to peace and stability in the Caucasus, the window of opportunity might well be closing fast.