Armenian genocide: "I remember them" 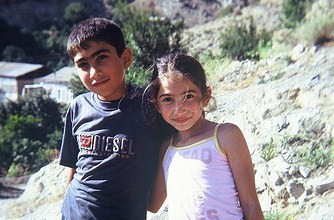 The Armenian genocide – a look from inside a family. Two 15-year-old survivors meet in an orphanage. Sharing the pain is impossible, even with descendants. Therefore, a young university student tells the real story of her grandparents on 24 April, Memorial Day

With this article, originally published on Osservatorio Balcani e Caucaso in Italian language last May 24, “Memorial Day” of the Armenian genocide, Laura Delsere has been recently awarded the prestigious “Enzo Baldoni Prize”, for articles published on the internet

Two distant lives, a name in common. At the end of April, 95 years ago, Armenia was celebrating Easter and Adel Faroyan's life was about to change when she must have been five years old. Details about her are hard to discern. Today, a 26-year-old graduate student in comparative literatures and languages, Adel Faroyan, her granddaughter, tells the story. “My grandmother Adel and my grandfather Gurghèn found themselves alone when they were children. They were the only genocide survivors in their respective families.”

"I had to fight to know about their past"

It is hard to reconstruct those facts, both because they happened in their childhood and because they are too painful. “I had to struggle to know about their past,” confirms Adel, “They would never talk about it. Except, barely, when their children – my father Grigor and his siblings – insisted. Questions became less and less frequent, because the pain on my grandfather's face was too much when he thought of that time. It only took a mention of Kharberd, his lost native town, to make him cry instead of talk.”

How could they make him talk, since it was so much pain for him? Nevertheless, how could they let him be silent?

A long silence is common for survivors. As is well known, Shoah survivors did not talk among themselves or to their children, even for decades. Neither did survivors of Metz Yeghern when on 24 April, 1915, the regime of Young Turks unleashed the “great evil” that over the following months killed over a million Armenians in Anatolia, creating countless Gurghèns and Adels. “My grandfather kept details of the moments he lost his relatives,” explains Adel. In April 1915, he was the second youngest of a large family. His father Grigor and the eldest son Hovhannes had been called in the army and disappeared even before the deportation.”

Fragments of the last day

“That last day, the other children had gone to work in the fields. Gurghèn remembers finding the house suddenly empty and looking for them in the fields. But he found them all dead. Running away, he met his mother – my great-grandmother Makruhì – with newborn Surèn in her arms. Mother and baby died during the deportation. We do not know what happened after. Someone saw a lonely kid and took him with them. My grandfather never told who saved him and how he ended up in the American orphanage in Gyumri. And there, at 15, he met my grandmother Adel and married her.”

A pair of girl's shoes

Something was left of Adel's life before the genocide. “A pair of small high-heeled shoes, tailored for her. She must have worshipped them, because she brought them with her, hidden in a bag – a useless treasure for a deported girl. Adel survived, but without parents or siblings. She never told what she saw. There are thousands of stories like hers: people survived by chance – a bit of bread, a drop of water, someone's mercy. A neighbour – another little girl – survived because she grabbed a cow's tail while the deportees’ column went through a river, but her brother was not as quick. Many years later, in our house in Yerevan, I used to play with those childish shoes. I did not know what they meant; I would put them on to look older. And then, my mother would stop me: ‘These are your grandmother's, you must not touch them!’ We still keep them.” So, a pair of children shoes makes it possible to tell the story of Adel and Gurghèn, makes it possible to get through hell.

Adel was also taken to the American orphanage in Gyumri, which some documents of that time still call Alexandropol. The orphanage was managed by the North American association, “Near East Relief”, which helped an estimated 11,000 orphans like Adel and Gurghèn. (The association was founded to aid Armenian genocide survivors, with a strong part played by the US ambassador to the Ottoman empire, Henry Morgenthau, among the most influential early witnesses of the events, editor’s note.) It was one of the international institutions – including Greek, Russian, British, French, German, and Swiss – that began to take care of Armenian genocide survivors in late 1915. Minors were mostly placed in orphanages with thousands of children and little staff, where only basic education was possible.

“Adel met Gurghèn when they were both 15. They fell in love and married. She became a hospital nurse; he started working as a driver. They had 12 children and one of them is my father. They gave them the names of those they had lost: Surèn, Makruhì, Adel, Grigor, Hovhannes. Hearing those names in the house felt like a presence. Moreover, they decided to have many children in order to be sure they would always have someone close in their life. As a large family, in the Armenian that was now part of the USSR, they received a free apartment in Yerevan. The sunlight struggled to get in that small, uncomfortable place where we still live.”

Family secrets, however, do not end here. “My grandmother went under a false surname. I thought her maiden name was Matveevna. Her children believed she was of Russian origin. She even brought them on holiday to St. Petersburg, where she had grown up. Only much later did I know about her identity. Her surname was Lapuchina – an aristocratic name. A Lapuchina was the first wife of the Tsar Peter the Great. Pushkin devoted a poem to a young Lapuchina. But then, after the 1917 revolution, Lapuchina became a dangerous surname that clearly signalled 'white Russian' and she needed to protect herself. Therefore, my grandmother, even after surviving a genocide, would have been safe in the USSR only with a fake surname. And, she became Adel Matveevna.”

Adel, the granddaughter, now talks about herself. “It is important for me to tell this story. Memory makes these people alive again, while they seemed lost forever in the massacre. Sure, there is not much left of them – because the memory was deliberately destroyed. The very town of Kharberd, the memory of which made my grandfather cry, was burnt down: house by house. As Kemal Pasha said (i.e. Ahmet Kemal, who planned the genocide with Enver and Talat in the Young Turks government, editor’s note), there was supposed to remain only one Armenian and only in a museum”.

Adel and Gurghèn are no longer alive either. “She died in Yerevan because of mistaken medical treatments. He died soon after in a car accident.” Then, the story took another turn. For the generation of Adel’s father, remembering their ancestors meant nationalism and defending Armenia in the army. “My father Grigor fought in Nagorno Karabakh in the nineties, and was among those who took the town of Shushi in the dramatic battle of the Armenian-Azeri conflict,” Adel confirms.

For herself, Adel chose another career: studies abroad and comparative literatures, but also fieldwork to reconstruct the past and university initiatives to make her culture known; until she could talk about another Adel. The effect is like spring reflected in a mirror – and it creates light.