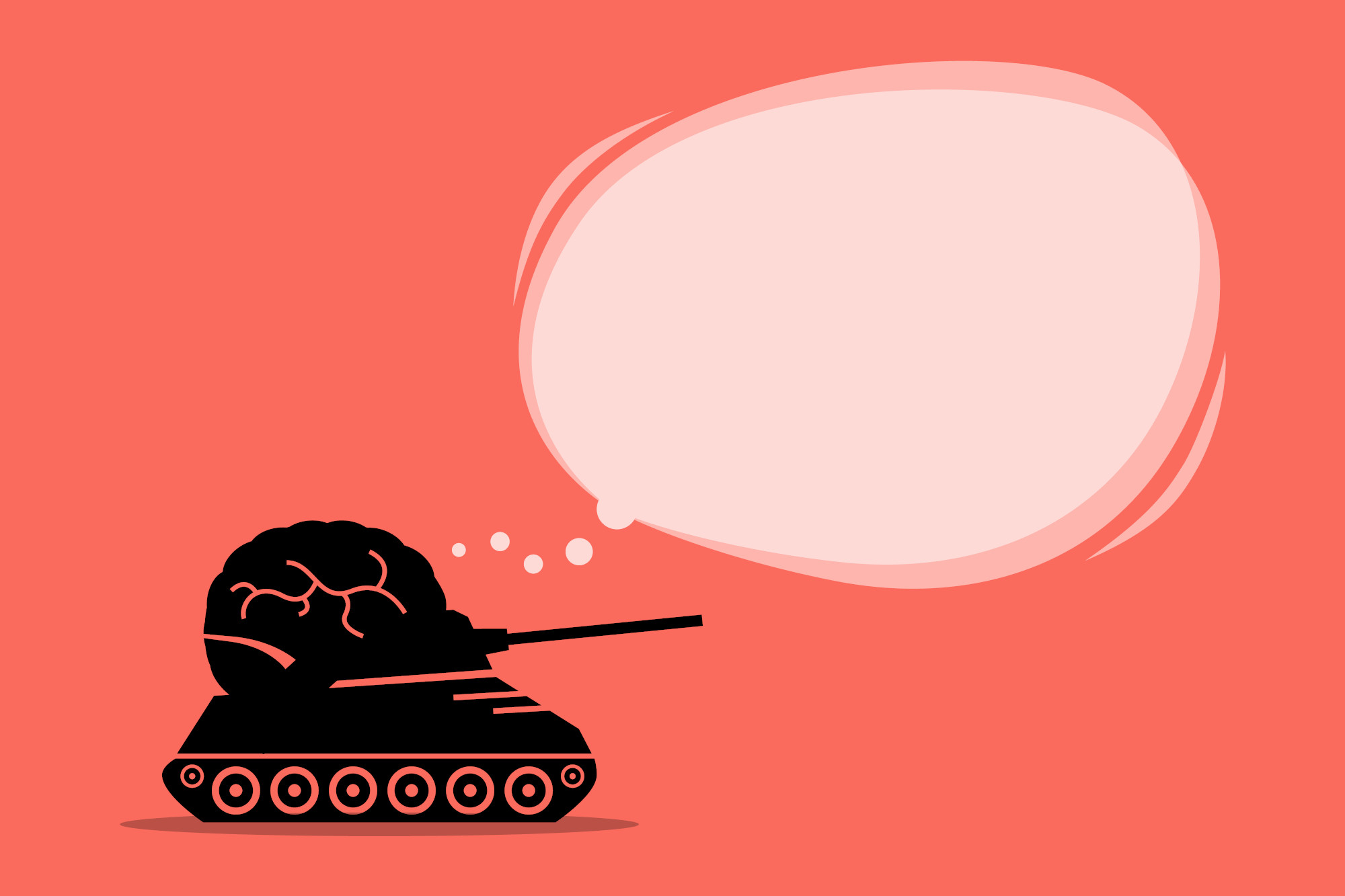 In English, "tanks" both contain and attack. Image of Leremy/ Shutterstock

Politics is not only made in parties, but also in think tanks: research centres, places of relationships and safes. In Italy the transparency law has equated them with parties, but the issue is complex

Parties are required transparency to prevent undue influence and legitimate corruption . Yet, for the purposes of certain transparency norms, other organisations (foundations, associations, or committees) are treated as parties, including some which call themselves think tanks.
In this article, we will first ask ourselves what a party is: the question is not as simple as it seems, at least from a legal point of view. We will then see what political think tanks are and why some of them are in some respects equivalent to parties, and with what consequences.

What is a party?

In a democracy, a party is – according to the Treccani encyclopedia – an organisation "that pursues the objective of managing political power through the electoral competition process". However, from the juridical and constitutional point of view – explains Maria Romana Allegri, professor of Public Law at the Sapienza University – it is a free association of people. To qualify as a party, an organisation is not bound to respect specific organisational forms or register in specific lists. Freedom of association is granted by art. 18 of the Constitution : a specific discipline of parties could therefore be unconstitutional, although it could also favour transparency. There is, therefore, no precise legal category of party. Not even the names of the organisations help, as "the term 'party' is no longer fashionable and everyone calls themselves in the strangest ways to avoid it: movement, association, home of the Italians, etc.".
Things change if a party intends to access public funding. Direct funding was abolished by the 2013 Letta decree, but indirect funding remains in the form of the "2 per 1000" mechanism and tax relief on donations. "In this case – continues Maria Romana Allegri – registration in a special register of political parties is required, as is as the publicity of the statutes and budgets, which are under the control of the Commission to guarantee statutes and for the transparency and control of the statements of the political parties : a control that is more formal than substantial, as the commission, with five members and seven officials, is largely understaffed. All the parties except the 5-Star Movement, explains Irene Pellizzone , have enrolled in the register.
Yet, what may appear to be one party is often a national association with several local sections. Browsing the over 700 pages (downloadable in PDF here ) that collect "Donations to political parties and movements registered in the national register", it turns out that this is the case of the Northern League, which was born as a federation of regional movements (Lega Lombarda, Liga Veneta, etc.). Recently, apart from the "League" proper, a separate "League for Salvini Premier" was born, to which – according to Stefano Vergine – assets are being merged. Also Brothers of Italy appears in different local articulations.
Even more complicated is the situation of the 5-Star Movement, which refuses to call itself a party and has refused to register as it has renounced all public funding, including indirect. However, if we look at the table, we find different organisations that are tied to M5S: in addition to an association called Movimento 5 Stelle (anomalous compared to the other parties as it has very few members, much fewer than those registered on the Rousseau platform), there are Associazione Rousseau , Comitato per le rendicontazioni/rimborsi del Movimento 5 Stelle , Comitato Italia a 5 Stelle , and others which, judging by the names, appear to have a limited duration – such as the 5-Star Movement Election Committee for European Elections 2019 and the Italian 5-Star Committee 2019.

However, parties are not the only structures through which a subject – a party, a politician, or a simple citizen – can seek to influence public life. This is the case, for example, of think tanks – independent research centres focused on policy-making, but also places to forge relationships, or safes for funds free from party control. Formally, these are generally associations or foundations.
An example is the VeDrò Foundation, a think tank tied to former prime minister Enrico Letta, which for years brought together politicians of various orientations, men of finance, and others in Dro, in the province of Trento. In 2013, when Letta formed his government, many of the members were actually "Vedroids" (as they identified themselves ): this was the case of ministers Alfano, Lupi, De Girolamo, and Orlando, but also many other participants took on important positions . With the birth of the Letta Government, the foundation was first suspended and then shut down , perhaps also because of accusations of conflict of interest by the 5-Star Movement due to the sponsors of VeDrò including many former public monopolies , still tied to politics.
OpenPolis also identified several organisations with links to the first Conte government: a/simmetrie , led by League economist and senator Alberto Bagnai; Aspen Institute Italia , which includes Paolo Savona and Enzo Moavero Milanesi (but also many politicians linked to other parties); the Iustus foundation , with – again – Savona and Giovanni Tria, and the aforementioned Rousseau Association, led by Davide Casaleggio, with members Alfonso Bonafede and Manlio Di Stefano.
Mattia Diletti, professor of Political Sciences at the Sapienza University of Rome, has dealt extensively with think tanks. He explained to us that the Italian specificity is the creation of personal think tanks: the most famous case is perhaps that of Matteo Renzi's Open Foundation . Today there is a contraction of the phenomenon (Open itself has closed): according to Diletti, this happens because the existence of these subjects was more linked to second-tier leadership, and with the end of PDL and the shrinking of PD they are no longer justified. Survival chances have been better for those with strong thematic specialisation, such as Marco Minniti's Icsa that works in security and Ermete Realacci's Symbola that deals with environmental issues.

The role that think tanks play in personal relationships between leading figures in public life would justify a request for transparency, even more so given the funding they receive – although, according to Diletti, the sums at stake do not justify the current level of alarm.
Law 3/2019 amended the Letta decree (149/2013) by equating foundations, associations, and committees linked to political parties and leaders with political parties and movements for the purposes of transparency obligations.
Many third sector organisations reported the risks for volunteer associations, and therefore the text was modified again with legislative decree 34/2019. According to the final version, foundations, associations, and committees are treated as parties if:

By July 15th of each year, organisations are expected to publish on their institutional site the statute, the financial statement accompanied by the supplementary report, the minutes of approval by the board, and the monthly communication of donations exceeding 500 Euros received in the course of the year.

Not all problems have been solved. As OpenPolis points out , these obligations leave out organisations that definitely seem to have ties with politics, like Gianluca Savoini's cultural association Lombardia Russia. On the one hand, an association is subject to the obligations if a new board member is elected that has been a councillor in a small municipality; on the other hand, it is exempt if it is not managed by politicians, but by trusted emissaries.
Furthermore, there is not even a list of organisations that meet the requirements mentioned above, so the doubt remains that some do not comply with the obligations. In the table published on the website of the Parliament, for example, the absence stands out of the Civil Action Committees (which Renzi had founded when he was still in the Democratic Party) and of Italia Viva (which, however, publishes the contributions on its website ), but also of the territorial structures of the Democratic Party – except for Verona (also in this case, however, the data are not hidden: here, for example, those for Trentino ) – and other parties. The law – better said, the laws that have piled up over the years – are complicated enough to make it difficult to understand the reason for this absence.
As also reported by then head of the National Anti-Corruption Authority Raffaele Cantone, the Guarantee Commission is undersized for the workload assigned to it, so it seems reasonable to doubt whether it is able to identify the missing subjects as well as to verify the documents received. Much, therefore, remains to be done to build a system capable of creating a climate of trust among citizens.